Read to find out about the celebration of Christmas in Austria.

Austria shares many Christmas traditions with its neighbor Germany, but also has many special Christmas customs of its own. Christmas in Austria is one of the most beloved holidays.

During Advent, many families will have an Advent Wreath made from evergreen twigs and decorated with ribbons and four candles. On each of the four Sundays in Advent, a candle is lit and a carol or two might be sung!

Most towns will have a ‘Christkindlmarkt’ (Christmas market) from late November or early December, selling Christmas decorations, food (like gingerbread) and Glühwein (sweet, warm mulled wine). Cities like Vienna, Innsbruck and Salzburg have huge markets and people from all over the world visit them.

Every town will also have a large Christmas Tree in the town square. In homes, trees are decorated with gold and silver ornaments and stars made from straw. 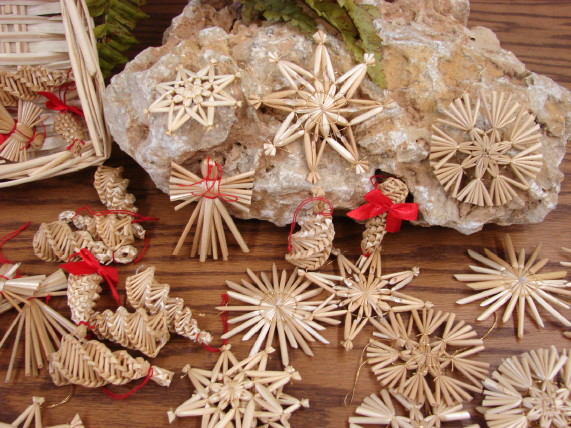 Straw Christmas ornaments have been used in Austria, Germany and Scandinavia for years. They are fairly easy and inexpensive to make and they became quite common. But it is more than that. Straw is closely tied to the symbolism of Christ Child being born into a bed of straw. The legend of the first straw ornament is related to the Christmas story. In fact, legend has it that a young shepherdess wanted to give a gift to Baby Jesus but she had no money to buy anything. As she was laying on her straw mattress staring up at the star-filled sky, she saw the star of Bethlehem and suddenly had the idea of recreating the star out of straw and giving it as a special gift.

Christmas in Austria really starts around 4 pm on Christmas Eve (‘Heilige Abend’) when the tree is lit for the first time and people come to sing carols around the tree. The most famous carol is Silent Night (‘Stille Nacht’), which was written in Austria in 1818.

“Silent Night” (German: “Stille Nacht, heilige Nacht”) is a popular Christmas carol, composed in 1818 by Franz Xaver Gruber to lyrics by Joseph Mohr in the small town of Oberndorf bei Salzburg, Austria. It was declared an intangible cultural heritage by UNESCO in 2011. The song was first recorded in 1905 and has remained a popular success, appearing in films and multiple successful recordings, as well as being quoted in other musical compositions.

From the small village of Oberndorf near Salzburg, the world’s most famous Christmas carol has spread around the globe. Without “Silent Night”, Christmas would only be half as beautiful. Which is why Oberndorf is filled with such an inimitable Advent atmosphere. 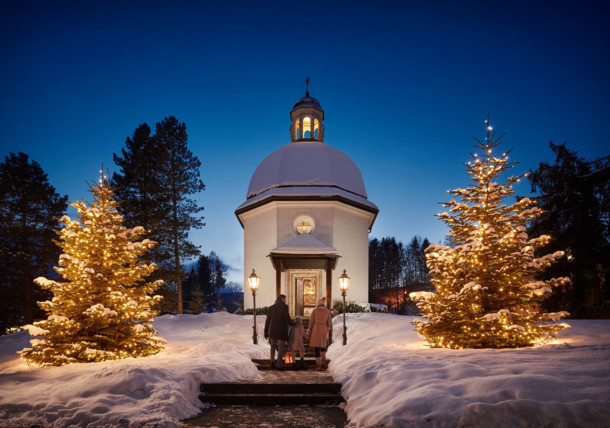 The national pop radio station Ö3 has special Christmas ‘jingles’ and plays Christmas music from 4.00 pm on ‘Heilige Abend’. It’s used by many people as the ‘soundtrack’ to the start of Christmas.

Traditionally the Christmas tree is brought in and decorated on Christmas Eve. Decorations include candles (now often electric) and sparklers. For children other important decorations are sweets, such as small liqueur-filled chocolate bottles, chocolates of various kinds, jelly rings and ‘Windbäckerei’ (meringue, usually in the form of rings, stars, etc.).

Some children believe that the ‘Christkind‘ decorates the tree. The Christkind also brings presents to children on Christmas Eve and leaves them under the tree. The Christkind is described as a golden-haired baby, with wings, who symbolizes the new born Christ. The original Christkind actually looked like the newborn Jesus. But the figure became more and more independent in the customs: the idea of ​​an angel-like being emerged, which in appearance no longer had much in common with Jesus. It is possible that this fact stems from the fact that the Christ Child used to be accompanied by a flock of angels in nativity plays and Christmas parades. It is still customary today for girls to wear white robes and a wreath of light on their heads on this day. There is an amazing visual parallel to the Christ Child. 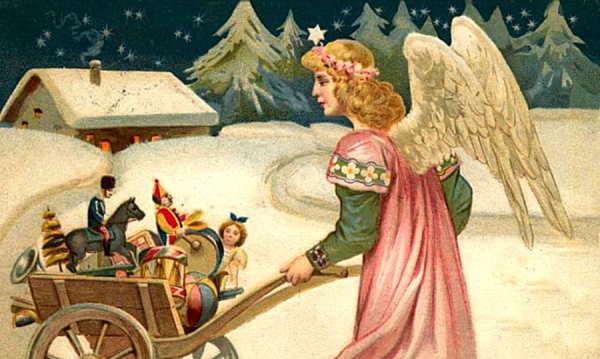 St Nicholas and the Krampus

Some children might also get a present from St Nicholas on December 6th. In Austria, St Nicholas is often accompanied by the Krampus, He a big horned monster clothed in rags and carries chains. He’s meant to punish children who have been bad! 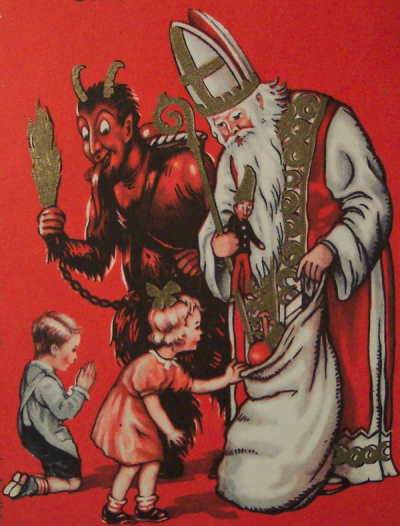 The Krampus is an alarming-looking creature which appears during the Advent period in Austria (and, sometimes in different versions, in some other countries).

Originally thought to have come from the old pre-Christian myths involving beasts from the forest and creatures such as satyrs, the Krampus became linked with St Nicholas in the Middle Ages. As with so many pagan customs, it was absorbed into the official Christian calendar. St Nicholas had by the 16th century started to become associated with the traditional pre-Christmas period of gift-giving which had become popular (again absorbing the local custom of December trade markets).

The Krampus traditionally appeared on the night before the Feast of St Nicholas (the evening of December 5).

They wore animal skins and carved wooden masks, had bells tied onto their costume so that people could hear the clanking coming through the darkness, and they carried long sticks. The chains that they sometimes wear are thought to be related to the idea of the creatures being bound to their place in the underworld, while the sacks that they carry are to take very bad children away with them.

In days gone by, the Krampus were seriously feared by smaller children, who were tossed into the sack and then dragged through the snow.

Nowadays however many of the larger cities and towns have formal processions which tend to be fairly orderly. 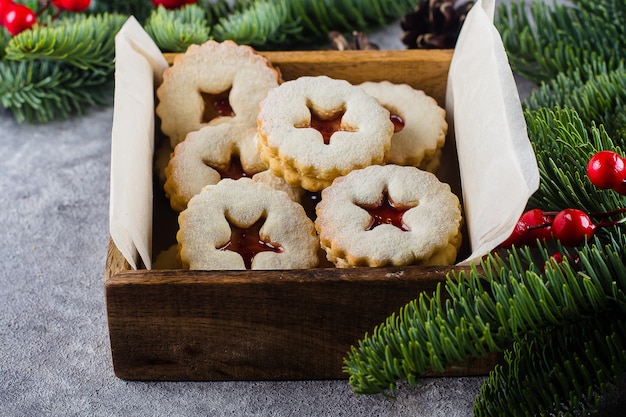 The main Christmas meal is also eaten on Christmas Eve. It’s often ‘Gebackener Karpfen’ (fried carp) as the main course; this is because Christmas Eve was considered a ‘fasting’ day by many Catholics and no meat could be eaten. However ‘Weihnachtsgans’ (roast goose) and roast turkey are becoming more popular. Dessert can be chocolate and apricot cake ‘Sachertorte’ and Austrian Christmas cookies ‘Weihnachtsbaeckerei’ like ‘Lebkuchen’ (honey gingerbread) and ‘Vanillekipferl’ (almond cookies made in the shape of a horse shoe).

While Christmas traditions vary from family to family, the Christmas goose is one of the most favorite dishes served in Austria on Christmas day or Christmas Eve.

Filled with apples, baked chestnuts, and cloves, seasoned with salt, pepper, marjoram, and shallots and served with potatoes, red cabbage or dumplings, this Christmassy comfort food is a favorite with Austrian families.

Families choosing not to eat a baked goose for their Christmas Dinner usually opt for the famous Weihnachtskarpfen as an alternative. 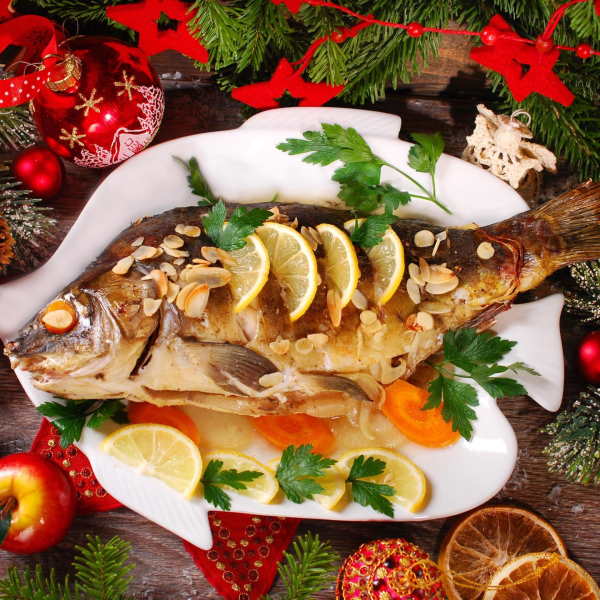 As soon as Christmas season starts, you will notice a myriad of food-stands offering hot chestnuts. Known as maroni, this wintery snack long ago became a staple of an Austrian Christmas. Baked chestnuts contain a lot of minerals and vitamins, making them as healthy as they are delicious!

The Austrian Christmas season cannot be imagined without the famous Christmas punch. This hot alcoholic beverage usually consisting of a combination of tea, sugar, red wine, cinnamon, and some kind of strong liquor. Depending on the recipe, you could also find apples, oranges or berries in a cup of this traditional Austrian drink.

Served at Christmas markets and the many stands that pop-up all over Austria during winter, this hot drink serves as a perfect way to warm yourself up on your way home from work. It also makes a great alcoholic dessert for your next Christmas party or New Year’s Eve get-together.

Christmas Punch isn’t the only festive drink that is essential for a proper Austrian Christmas. Mulled wine, the so-called Glühwein, is another beverage you will not only find on every Christmas market but also across pop-up stands all over Austria during the cold winter season. 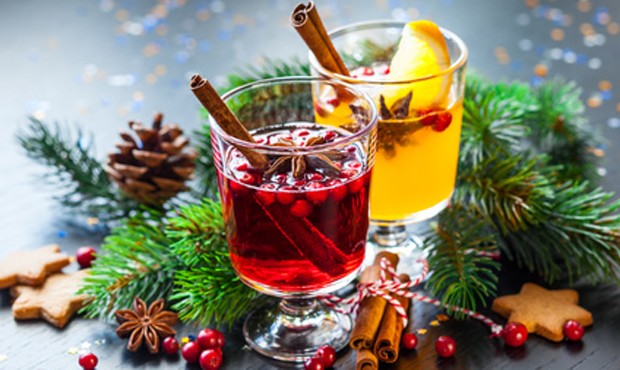 Another simple, yet surprisingly delicious Austrian Christmas dish is baked apple. Simply cut open an apple and replace the seeds with a mix of chocolate, hazelnuts, cinnamon, and cardamon.

Another favourite Austrian Christmas delicacy is the famous Schaumrollen. Consisting of a crumbly exterior filled with a sweet, foamy cream, it is hardly surprising that they have become a favorite festive treat.

One of Austria’s most popular Christmas traditions is baking Christmas cookies. Most families will spend the four weeks leading up to Christmas day in the kitchen, baking different types of cookies. While Austrians love to snack on cookies in the days around Christmas, the baking process itself has become a cherished yearly tradition in many Austrian families.

Vanillekipferl (Vanilla Croissants)  are vanilla-flavored cookies that are famous for their half-moon shape. And as surprising as it may be, only five ingredients are needed to create these famous Austrian delicacies. 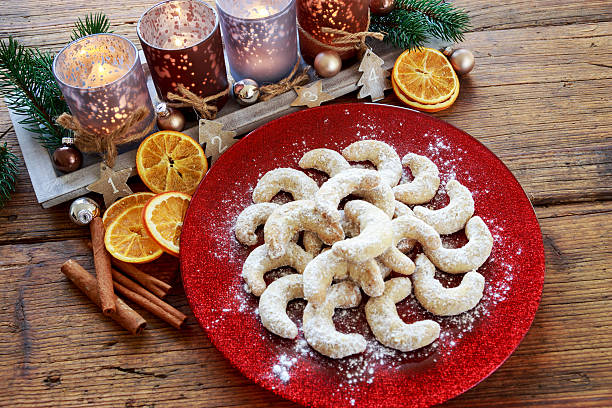 Cinnamon stars are another cookie delicacy rarely missing from the Austrian holiday season. As the name suggests, these star-shaped beauties are famous for their cinnamon flavor.

Every year, Austria’s capital city, Vienna, holds a world famous classical music concert ‘NeuJahrsKonzert’ which takes place during the morning of New Year’s day. It’s held in the ‘Großer Saal’ (large hall) of the Musikverein, the concert hall of the Viennese Music Association. The concert is played by the Vienna Philharmonic Orchestra and always features music from the Strauss family: Johann Strauss I, Johann Strauss II, Josef Strauss and Eduard Strauss. It is famous for its waltz music. During the last piece played, The Blue Danube, the introduction is interrupted by applause from the audience and the musicians then wish them a Happy New Year! The concert is shown around the world on TV. 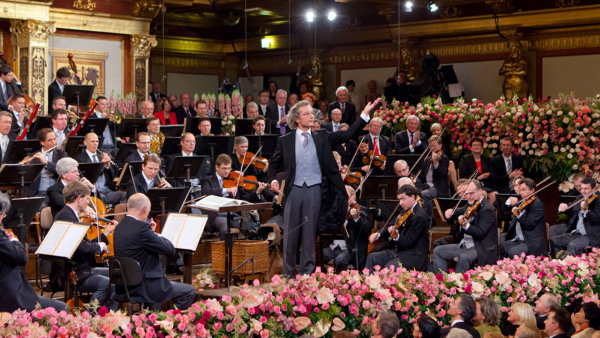 Epiphany is always celebrated on January 6th and commemorates the presentation of the infant Jesus to the Magi or the three wise men. In some countries, it may be known as ‘Three Kings Day’.

Epiphany is derived from the Greek word ‘epiphaneia’ and means manifestation. In religious use, the term means the appearance of an invisible divine being in a visible form.

On the eve of Three Kings Day, children may go outside and pick up grass and put it in a shoebox under their beds, and then to sleep with the hope that presents would replace the vegetation. In the morning, the grass would be strewn across the floor, meaning that the Three Wise Men, and their respective camels, had come in the night to deliver gifts.

A common Austrian tradition is the Sternsinger (star singers), a group of young people that travel from door to door dressed as kings and singing in four-part harmony. If they knock on your door, they may sing, bless your home – and expect a donation for a cause organised by the churches. 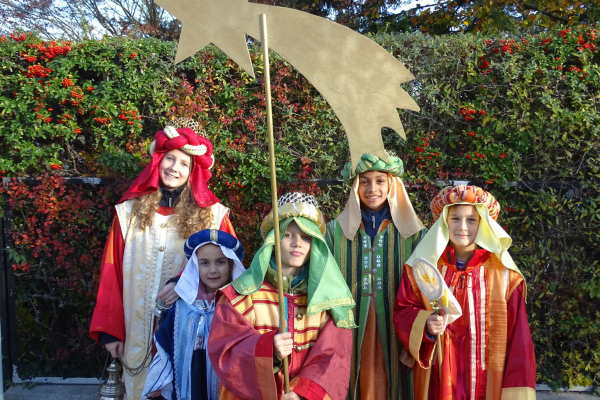 For Epiphany, 6th January, many people will put a special sign in chalk over their front door. It’s a reminder of the Wise Men that visited the baby Jesus. It’s made from the year split in two with initials for ‘Christus mansionem benedicat’ which is ‘May Christ bless the house’ in latin. So 2022 would be: 20*C*M*B*22. The sign is meant to protect the house for the coming year. (Some people say the ‘C M B’ can also represent the names that are sometimes given to ‘the three wise men’, Caspar, Melchior and Balthazar, in the middle.) The sign is traditionally written on the door by the Sternsinger (or star singers), carol singing children who dress up like the Wise men; and one who carries a star on a stick as a symbol for the Star of Bethlehem.

Some people, or those who live in the mountains, might go skiing on Christmas Day. Skiing on New Year’s Day is also popular. 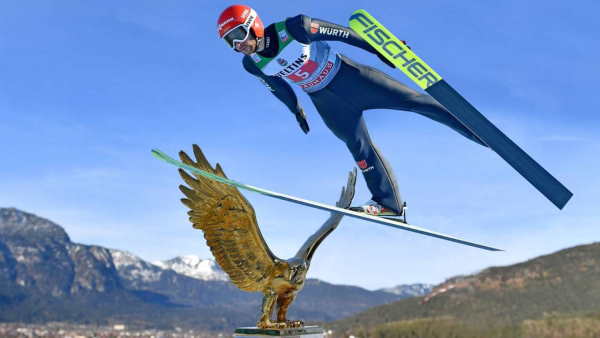 Another famous event that happens over the new year in Austria and Germany is the Ski Jumping ‘Four Hills Tournament’ (‘Vierschanzentournee’). It starts in Germany with Oberstdorf (Germany) on the 29th or 30th December and Garmisch-Partenkirchen (Germany) on New Year’s Day; and continues in Austria with Innsbruck (Austria) on 3rd or 4th of January and Bischofshofen (Austria) on the 6th January.

Speak about the celebration of Christmas in Austria. Don’t forget to leave your comment.