Hello, I’m Dasha. I got a task in my English lesson to describe a painting. I was inspired by “Girl with a Pearl Earring” and I’d like to describe this painting.

The painting “Girl with a Pearl Earring” is considered to be one of the most popular paintings in the world. It became known by its title towards the end of the 20th century after the earring worn by the girl portrayed here.

This famous painting belongs to the brush of a Dutch painter Johannes Vermeer. This artist lived in the 17th century and worked in the style known as Baroque. “Girl with a Pearl Earring” is signed “IVMeer”, but not dated. It is estimated to have been painted around 1665. The painting is a tronie, the Dutch 17th-century type of work which depicts a characteristic facial expression. The work is oil on canvas and measures 44.5 cm high and 39 cm wide. Now, the painting permanently resides in the Mauritshuim museum in the Hague, Netherlands.

The term tronie means “face” in 17th century Dutch. A tronie is a type of work common in Dutch Golden Age painting and Flemish Baroque painting. It refers to paintings that depict an anonymous sitter, sometimes with an exaggerated expression or unusual costume.

These works were not intended as portraits but as studies of expression, type, or an interesting character such as an old man or woman, a young woman, the soldier, the shepherdess, the Oriental, or a person of a particular race, etc.

The difference between a portrait and a tronie is that in a portrait the sitter is known and the art piece has been commissioned whereas tronies were sold in the art market.

The main goal of the artists who created tronies was to achieve a lifelike representation of the figures and to show off their illusionistic abilities through the free use of color, strong light contrasts, or a peculiar color scheme.

“Girl with a Pearl Earring” represents a young woman in a dark space, so the viewer’s attention is kept on her. She is wearing a blue and gold turban, a pearl earring, and a gold jacket. One of the versions says, that the artist depicted his daughter Maria. Johannes Vermeer wanted to fix a moment when a lady was turning her head to someone she had just noticed.

Johannes Vermeer was a master of light. The evidence of it is in the softness of the girl’s face and the glimmers of light on her moist lips. And of course, the shining pearl.

Personally, I can’t but agree, that it is the true masterpiece which could stand the test of time. We can’t see many details here, but the painting looks so impressive and powerful!

Johannes Vermeer was a Dutch painter, born in Delft in 1632. He began his career in the arts when his father died and Vermeer inherited the family art dealing business. He continued to work as an art dealer even after he had become a respected painter because he needed the money.

Vermeer married a Catholic woman named Catharina Bolnes, even though he was a Protestant, and went to live with her and her mother in the “Papist corner.” Catholics in Delft lived in a separate neighborhood than the Protestants and the members of the two religions did not usually spend much time together.

Vermeer and his wife had fourteen children but not nearly enough money to support them all. Catharina’s mother gave them some money and let the family live with her but Vermeer still had to borrow money to feed his children.

In 1653, Vermeer joined the painters’ trade association, the Guild of Saint Luke. This allowed him to be taken seriously as an artist.

Later, Pieter van Ruijven, one of the richest men in town, became Vermeer’s patron. As patrons do, Ruijven bought many of Vermeer’s paintings and made sure he had canvas, paints, and brushes so he could work. Having a patron meant that Vermeer could use the color blue in his paintings, a very expensive color in the 1600s because it was made out of the semi-precious stone, lapis lazuli. And use blue he did. Look at the headband on this famous painting, Girl with the Pearl Earring. 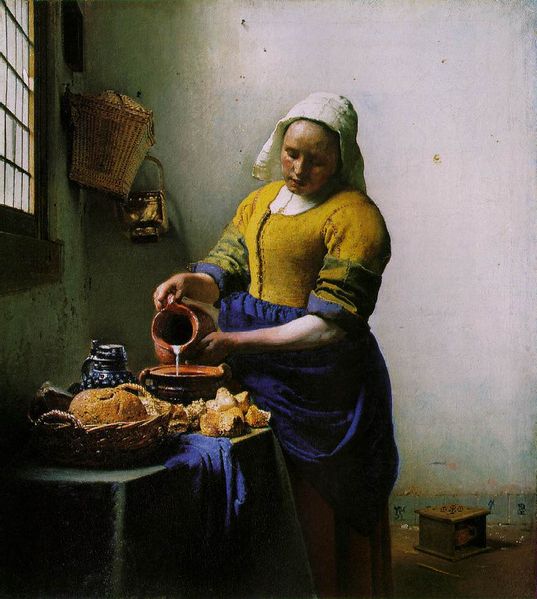 Today, we have given Vermeer credit for 66 paintings, though experts are only sure that 35 of them were actually painted by Vermeer. Another Dutch painter, Han van Mergeren, wanted to prove that he was a good artist so he painted in the style of Vermeer, making an unknown number of fakes.

Nearly all of Vermeer’s paintings show indoor scenes. One exception is View of Delft, shown below. Most have a single window on the left side of the painting which provides the light. (For example, The Milkmaid, picture to the left.) Vermeer created a smooth but thick painting by applying a thin layer of paint, letting it dry, then adding another thin layer of paint, and continuing until he was happy with the artwork. His subjects ranged from very poor workers to rich nobles.