What Is Fair Trade?

What do you know about Fair Trade? Read and speak about this movement.

Fair Trade is a worldwide movement that aims to help farmers and producers in less economically developed countries (LEDCs). The term fair trade means that they receive a fair price for the goods that they produce. Goods that are produced and sold in support of these aims usually carry a fair-trade label. Many products, including coffee, sugar, tea, cotton, wine, bananas, and handicrafts, are traded this way.

Fair trade allows farmers to be paid a fair price for the things they make and to have better working conditions. Some products that do not have a fair trade logo have been made by workers who are not paid enough to live. They might have to work in unsafe working conditions and the people working might be children. Buying a fair trade product means the consumer knows the workers that made the product have been treated fairly.

Fair trade is a great way for farmers to sell their produce at fair prices and have better working conditions. The idea of fair trade has been around since the 1960s. The Fairtrade stamp was introduced in 1994 and is given to products that have been sold using fair-trading conditions. Fair Trade foundations around the world help farmers and producers sell their goods.

Fair Trade is a social movement which tries to help people who make things in developing countries. The movement helps people to work in better conditions and helps them get more money for what they make. These things give workers the opportunity to improve their lives and plan for their future, and they help reduce poverty. The movement also tries to keep the environment the same or improve the state that it is in. it is a way to help poverty

Fair Trade helps people in developing countries sell to people in developed countries. Things that are sold in international trade include handicrafts and other manufactured goods, agricultural products such as grains, coffee, cocoa, sugar, tea, bananas, honey, cotton, quinoa, fresh fruit, chocolate, wine and flowers, and minerals such as iron and petroleum.

Merchandise that has fair trade status must be given a fair trade certificate. This says it follows rules about fairness to workers and the environment. This will mean the product can put the Fairtrade symbol on their packaging if they earn the certificate.

The first Fair Trade Label was used in 1988. It was created by a Dutch organisation to sell coffee. The label was called ‘Max Havelaar’. Max Havelaar is a Dutch book about someone similar to Robin Hood. 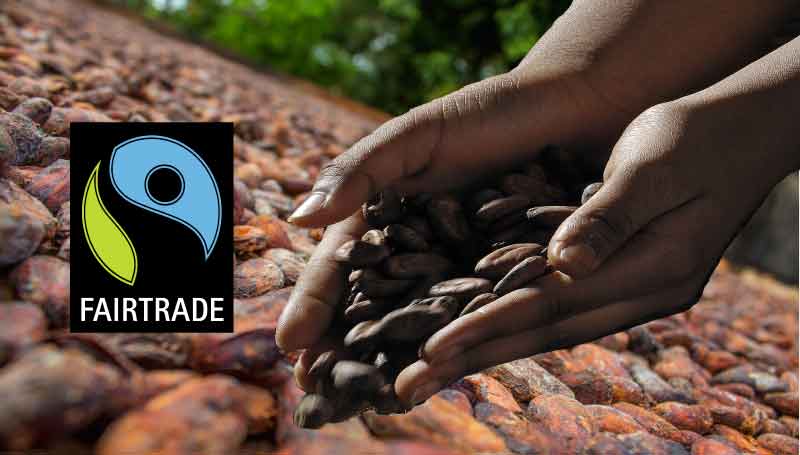 Fair Trade and Fairtrade are not the same things. ‘Fairtrade’ is a trademarked labelling system and ‘Fair Trade’ is the movement. If you see a Fairtrade logo on a product it means that the product meets the criteria set out by the Fair Trade movement. The ‘Fairtrade’ sticker combines a blue sky to represent hope and optimism and an arm raised in the air to represent empowerment. It also uses the colour green to represent the idea of growth.

Farmers and workers in LEDCs are often paid less for their goods and crops than those in more economically developed countries (MEDCs). This can lead the people in LEDCs to being trapped in poverty. People involved in the fair-trade movement help the farmers deal with big companies that buy their produce to make sure that the farmers receive a fair income plus a little bit more, called a “premium,” from their produce. The premium is used to fund community projects, such as schools and healthcare facilities.

The people who promote fair trade help farmers and producers work in a sustainable way. This involves looking after the environment, using fewer chemicals, and planning for the future. They also help farmers and workers to form groups, called cooperatives. By working together, these cooperatives are able to demand better prices for their goods.

People around the world, especially those in MEDCs, participate in the movement by making an effort to buy goods that are traded fairly. Fair-trade products sometimes cost more to buy, but many people are prepared to pay the extra to support the movement and its principles.

Before this farmers would often receive very little money and have poor working conditions while the big companies buying their produce would go on to make lots of money. Fair trade can put a stop to this inequality so that everyone can benefit from trading goods.