Have you ever been to New York City? Read and speak about the largest city in the United States.

New York City is the largest city in the United States. It is one of the world’s great centers of culture and business. One of its nicknames is “the city that never sleeps.” Over 8 million people live in it, and over 22 million people live around it. It is in the state of New York, which is in the northeastern United States. New York City is the most linguistically diverse city in the entire United States of America, with over 800 languages spoken throughout the city.

New York City is located in the state of New York. It lies where the Hudson and East rivers join New York Bay. The city is made up of five districts called boroughs: Manhattan, Brooklyn, the Bronx, Queens, and Staten Island.

New York City was settled by Europeans from the Netherlands in 1624. They named a town New Amsterdam after the capital city of the Netherlands. The English took over the colony in 1664 during the second Anglo-Dutch War. They changed the name to New York, to honor the Duke of York, who later became King James II of England. 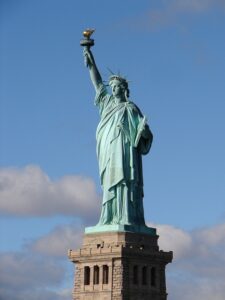 New York City is packed with world-famous sites. The Statue of Liberty is the symbol of American democracy. It stands on Liberty Island in New York port. Liberty carries the torch of freedom in her right hand. In her left hand she is holding a tablet with the inscription “July 4, 1776” — American Independence Day.

The Empire State Building is the best-known skyscraper in the Manhattan skyline. It’s a 102-storeyed building, was built in 1931.

The huge Central Park lies near the heart of Manhattan.

The Lincoln Center for the Performing Arts is home to the city’s world-class orchestra, ballet, and opera companies. The Broadway area is famous for its many theaters. The city’s great museums include the Metropolitan Museum of Art and the Museum of Modern Art. The Metropolitan Museum of Art (or ‘the Met’) is the largest art museum in the United States. It includes hundreds of world famous masterpieces and attracts many visitors.

There are two world-famous streets in New York — Broadway and Fifth Avenue. Broadway is the centre of the theatres and night life. Fifth Avenue is the great shopping, hotel and club avenue.

New York is a financial center of the country. The world famous New York stock exchange, many business offices, and banks are situated in Wall Street.

New York is an industrial centre of the country. The most important branches of industry are those producing vehicles, glass, chemicals.

New York City is home to the country’s largest zoo, which features more than 4,000 animals.

The New York City Subway system is one of the biggest in the world. John F. Kennedy International Airport (JFK), which is in the Queens neighborhood of New York, is one of the busiest airports in the United States.

Today New York City is informally called “The Big Apple”. The origin of this name is unknown, but it is popular all over the world.