St Sophia Cathedral stands as the oldest cathedral in Kyiv and one of the most amazing historical sites in Ukraine. Due to its rich history and stunning architecture, Saint Sophia Cathedral gained recognition on the World Heritage List. It also became one of the Seven Wonders of Ukraine in 2007. This splendid 13-domed cathedral is a must-see. St Sophia Cathedral in Kyiv is a symbolic monument. If the universal symbol of the Church of Wisdom has been and remains St. Sophia in Constantinople, the St. Sophia in Kyiv has been such symbol for the Eastern Slavonic world.

St Sophia Cathedral is the world famous historical and architectural monument of the 11th century. The name of the cathedral comes from Greek word “sofia”, which means “wisdom”. Built in the times of Yaroslav Mudry, the cathedral served as a social, political and cultural center of Kyivan Rus, where foreign ambassadors were received, chronicles were recorded and the first library, founded by Yaroslav Mudry himself, functioned.

Yaroslav Mudry’s ruling was the time when art, education and culture prospered. As of Kyiv, it became one of the most beautiful cities in Europe and Asia. Construction of Sophia cathedral played an important role in Kyiv’s look formation.

The cathedral was founded in 1037. Originally it had 5 naves and was surrounded with 2 circled galleries. During the centuries the architectural look of the cathedral had been changing. The cathedral was badly damaged during the Tatar yoke and then restored; it was burned many times and was reconstructed again. In 1707 St Sophia cathedral was rebuilt in the style of Ukrainian baroque and topped with typical pear-shaped cupolas. Nowadays the building of the cathedral combines constructions of the 17th, 18th and 19th centuries. In the temple erection in different times participated such architects as Shedel, Sparro, Zaborovsky and others.

For many years St Sophia Cathedral served as a burial place of Kyiv princes. In the cathedral remains of Yaroslav Mudry, his son Vsevolod, and Vladimir Monomakh are buried.

The cathedral is famous for its mosaics and frescos by Byzantine masters that date back to the 11th century. Marvelous frescos decorate walls, pillars and vaults. Inside, the central part of the cathedral is decorated with large mosaic depicting praying Virgin Maria. The mosaic is 6 meters high and consists of stone and glass plates of different colors and hues. Some frescos are especially interesting from both historical and artistic points of view, as they represent not only Holy Bible subjects, but also secular ones. For example, in the cathedral one can see portraits of Yaroslav Mudry family members. The belfry is decorated with paintings of the 11th century depicting scenes of the games arranged in Constantinople by Emperor Constantine in honor of Princess Olga. Paintings represent clowns, jugglers, musicians, dancers, animal trainers and chariot races.

St Sophia Cathedral is the best proof of its high historical and spiritual mission. It preserves excellent ancient architecture and the most complete in the world ensemble of original mosaics and frescoes of the 11th century – 260 square meters of mosaics and 3000 square meters of frescoes. They are true masterpieces of the world art. The greatness and the unique beauty of St. Sophia in Kyiv made it a glory of the true wonder of the world. St. Sophia Cathedral reminds us who our ancestors were and who we should be. For this it is kept by God and people. 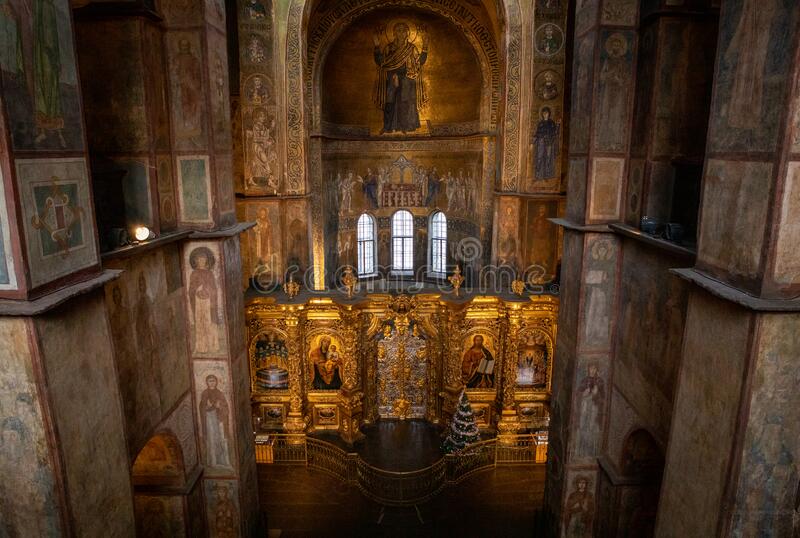 Nowadays St Sophia Cathedral is an architectural and historical preserve. It ranges among the most beautiful temples of Kyiv and the major attractions of the capital of Ukraine.