What do you know about Aesop? Have you read any of Aesop’s fables?

Aesop is quite possibly the most famous fable writer of all time. We don’t know everything about him, but people believe he was a slave in Greece and wrote much of his work around 550 B.C. Many of the morals in his fables revolve around equality, justice, and virtuous behavior. Without question, Aesop created a treasure trove of fables for children to read and draw lessons from.

A fable is a short story that teaches a lesson or conveys a moral. You’ll find a lot of personified animals in fables, like talking turtles and wise spiders.

From generation to generation, Aesop’s fables have been read and taught. At one point or another you would have heard of at least one of Aesop’s fables. For years, children have learned about the importance of being kind, selfless and giving.

Read and discuss these Aesop’s fables.

The Tortoise and The Hare

There once was a speedy hare who bragged about how fast he could run. Tired of hearing him boast, Slow and Steady, the tortoise, challenged him to a race. All the animals in the forest gathered to watch. Hare ran down the road for a while and then and paused to rest. He looked back at Slow and Steady and cried out, “How do you expect to win this race when you are walking along at your slow, slow pace?” Hare stretched himself out alongside the road and fell asleep, thinking, “There is plenty of time to relax.”

Slow and Steady walked and walked. He never, ever stopped until he came to the finish line. The animals who were watching cheered so loudly for Tortoise, they woke up Hare. Hare stretched and yawned and began to run again, but it was too late. Tortoise was over the line.

After that, Hare always reminded himself, “Don’t brag about your lightning pace, for Slow and Steady won the race!”

Moral: Slow and Steady wins the race. Sometimes in life, it might look like other people are racing ahead of you. But you never know what obstacle could stop them in their tracks. It is important to keep moving forward and one day you will get there. Never give up!

The Fox and the Grapes 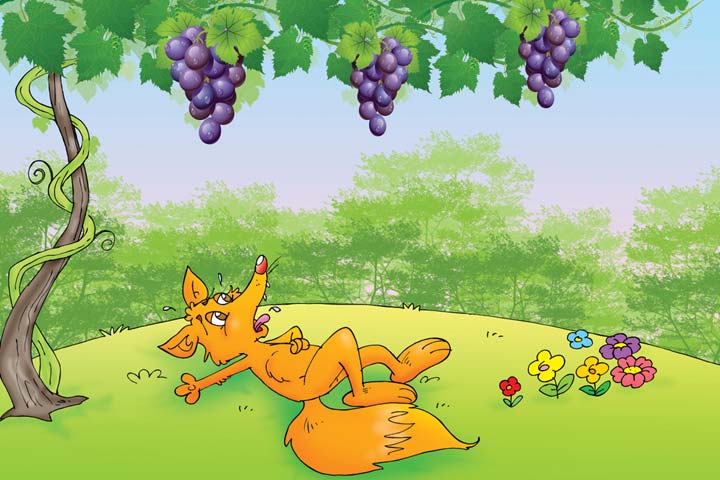 One day a fox was hungry. He had nothing to eat. He went here and there in search of food. He wandered about the whole day long, but could get nothing to eat. At last he came to a garden. There he saw grapes hanging from a vine. The grapes were ripe and nice. His mouth watered to see the grapes. He wanted to eat them.

The grapes were high up. He jumped again-and-again to get at the grapes, but in vain. They were too high for him. At last he was tired. He gave up trying. He went away saying. “These grapes are sour, If I eat them, I shall fall ill.”

Moral: Those who cannot get a thing, often say that they do not want it. It is easy to despise what you cannot get.