The City of Edinburgh

The City of Edinburgh

Edinburgh, a Jewel in Scotland’s Crown

Hi, my name is Liza and I’d like to share with you some interesting information about the capital of Scotland. Scotland is a country in the United Kingdom to the north of England. The two largest cities in Scotland are Glasgow and the city of Edinburgh.

Edinburgh is the capital city and the second most populous city in Scotland. Edinburgh lies on the east coast, where the River Forth flows into the sea. The population of Edinburgh is about 500 thousand people.

The city of Edinburgh is one of the longest continuously inhabited places in Northern Europe; there is archeological evidence of human habitation there in the Bronze Age, about 1,000 BC. It’s a public reminder to Scots of their roots.

Edinburgh has been the capital of Scotland since at least the 15th century, Edinburgh is home to the Scottish Parliament situated in the Holyrood area of the city.

Edinburgh Castle is Edinburgh’s principal building, dominating the city, perched on a rock over a hundred metres above the sea level. The Castle, in fact, is older than the city. The castle has a military display every year, called a tattoo, where soldiers show their skills at marching and competitions, and there are brass bands and bands of bagpipes.

The two most interesting parts of the city are the Old Town and the New Town. The Old Town lies between the Castle and Holyrood Palace. The Royal Mile leads from the Castle to Holyrood Palace which is another official residence of the Queen besides Buckingham Palace. Holyrood Palace was founded by James IV around 1500. The Palace is a museum itself, and it contains a number of museums. Among them are the Museum of Childhood with its unique collection of toys and games; the Writers’ Museum, a treasure house of items relating to Robert Burns, Sir Walter Scott and Robert Louis Stevenson, and the People’s Story Museum which tells the story of ordinary people of Edinburgh from the 18th century to the present day. If you ever go to Edinburgh, don’t miss other important sights: the Royal Museum of Scotland, St. Giles’s Cathedral, the National Gallery of Scotland and the Scottish National Portrait Gallery. Edinburgh has 900 buildings that are officially protected because of their architectural or historic importance – more than any other city outside London.

Princes Street is the most beautiful street of the New Town, it lies between the New Town and the Old Town. Edinburgh’s New Town is one of the most spectacular neighbourhoods in the city. The design of the New Town is based on the Union Jack flag. The New Town is a UNESCO World Heritage site and a true marvel of urban planning. Walking along the wide boulevards and symmetrical streets, lined with beautifully preserved Georgian houses and green open spaces, you can see why the New Town is considered the Scottish Enlightenment in stone. The elegant area was designed and built in the mid-to-late 18th century. As Edinburgh’s main shopping district, the New Town is home to chain stores, designer shops and boutiques. There are also plenty of chic bars, pubs and restaurants. 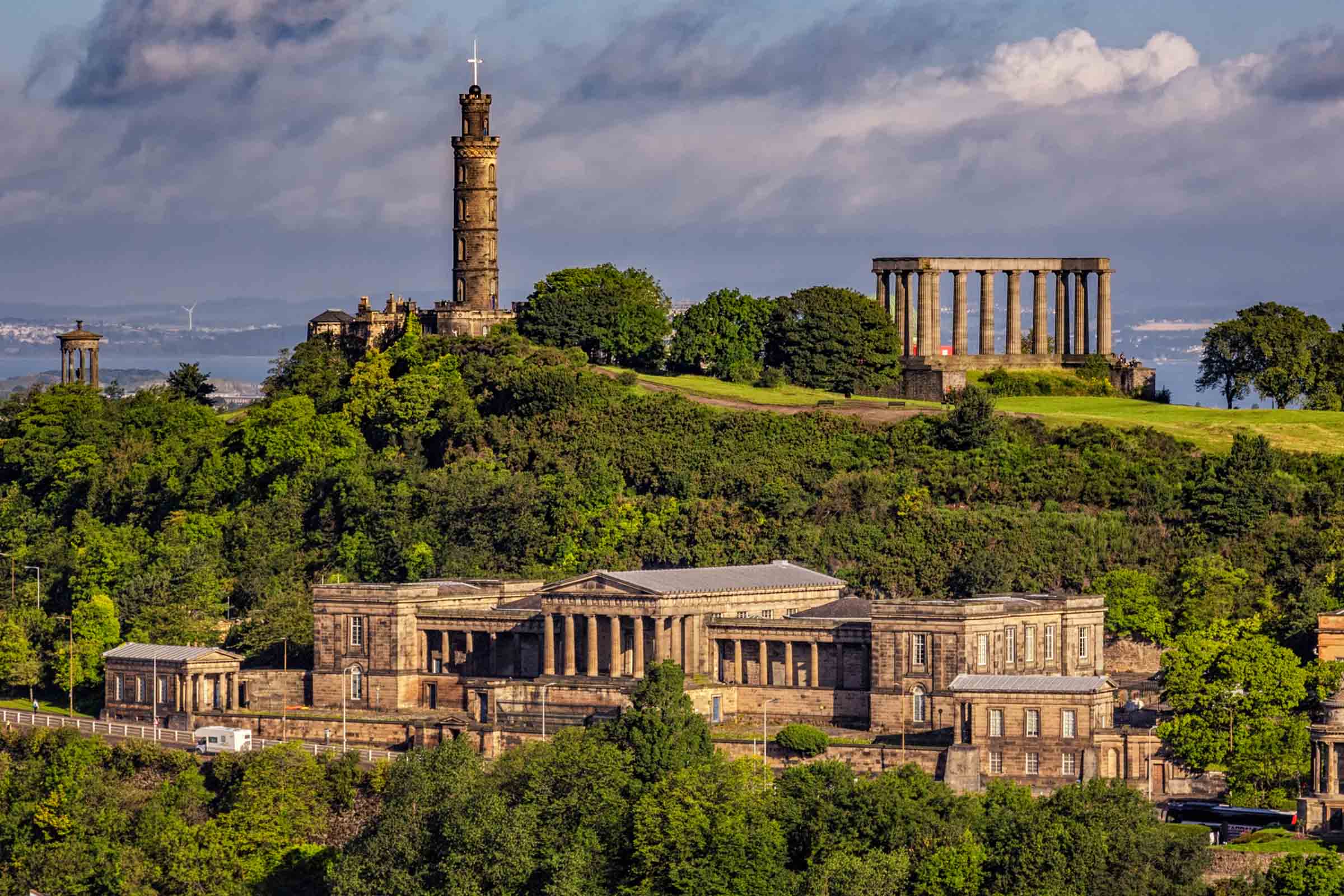 Calton Hill is a towering hill in Edinburgh that’s part of the city’s UNESCO World Heritage Site, as it’s home to numerous monuments and ruins, not to mention picturesque views. You’ll find buildings currently in use such as St Andrew’s House, which functions as the Scottish government headquarters, along with the iconic National Monument of Scotland which was originally envisioned as a replica of the Parthenon in Athens, but it never got close to completion.

The Nelson Monument is a tower erected in the early 19th century in honour of Vice Admiral Horatio Nelson for the Battle of Trafalgar. Additional monuments include the Dugald Stewart Monument, the old Royal High School and the City Observatory.

The city of Edinburgh has always been a great educational centre; it has three universities. It boasts of such world famous scientists as

In the 19th century, Edinburgh’s economy was known for banking, publishing and brewing. Today, its economy is based mainly on financial services, scientific research, higher education, and tourism. Edinburgh is one of Europe’s largest financial centers. The importance of the city as a financial centre is second only to that of London.

Famous people from the city of Edinburgh

The City of Edinburgh Quiz