Hi, I’m Katia. The loss of species and natural spaces is happening all around the world. I’d like to share with you some interesting facts about African forest elephants that are on the level of extinction and need to be protected.

Elephants are the largest land animals on Earth. But their size has not protected them from being in the endangered category of the latest Red List of Threatened Species. African forest elephants are now even closer to extinction – critically endangered.

African forest elephants are an elusive subspecies of African elephants and inhabit the densely wooded rainforests of west and central Africa. Their preference for dense forest habitat prohibits traditional counting methods such as visual identification. Their population is usually estimated through “dung counts”—an analysis on the ground of the density and distribution of the feces.

Forest elephants are smaller than savanna elephants. The forest elephant is the smallest of all members of the family. The average height at the withers of females is 144-155 cm, in males it is somewhat higher. Body length is 160-286 cm, weight 2700-6000 kg. Size increases with age.

Forest elephants have straight and slender tusks that are vertical to help them navigate through dense thickets. The ears are rounded, with overhanging valves along the upper edge of the ear. They help the animal regulate temperature, as forest elephants have few sweat glands. There are 4 toes on the front legs, 3 on the hind legs. 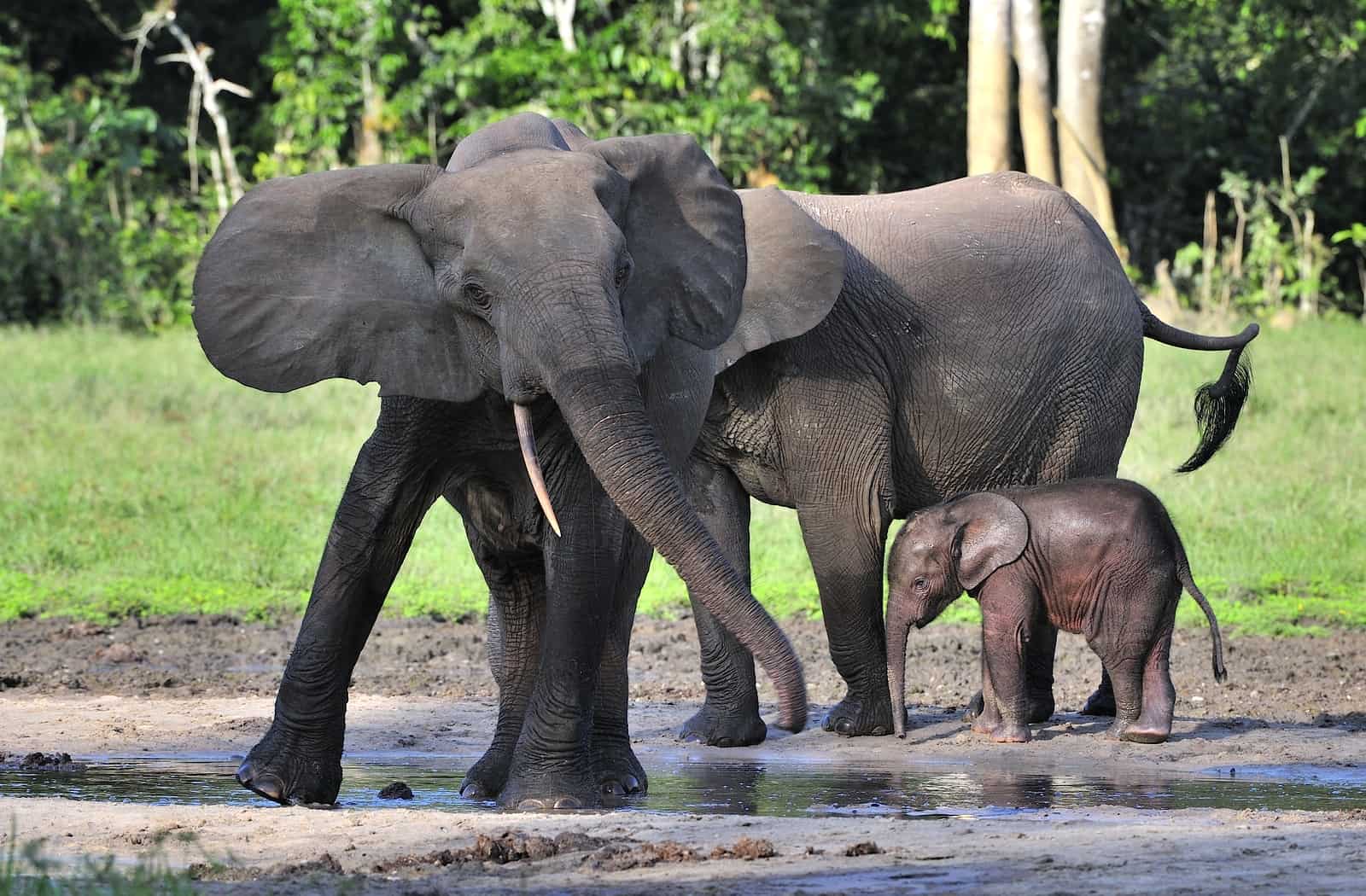 The animal is able to distinguish a voice from a member of its group. Among the sense organs of forest elephants, hearing and smell are well developed; the latter helps them find food.

Forest elephants travel in small groups of 2-8 individuals. The average family size is 3-5 animals. Most groups consist of one or more females and their offspring. Unlike their savannah cousins, forest elephants almost never interact with other family groups. Males tend to live alone, only mating with females during the breeding season.

The forest elephant is a herbivore, the diet mainly consists of fruits, leaves, bark and branches of rainforest trees.

Pregnancy lasts 22-24 months, 1 calf is born, twins are quite rare. Feeding continues for 3-6.5 years, although the young begin to eat grass at the age of one year.

Female forest elephants take care of their offspring for a very long time, up to the age of 8 years. Newborns can stand immediately after birth, at first they do not move further than 5 meters from the mother.

Life expectancy is not exactly known. Forest elephants are estimated to live 65 to 70 years in the wild. In captivity, the average lifespan is 33 years, and the oldest individual died at 53 years of age.

The reduction in the number of elephants is due to lack of water and food, as well as due to poaching. The life of an African forest elephant depends on three factors: reliable protection from poachers, proper habitat conditions and informing people about the number of animals. But conservationists are confident that these giant icons of African wildlife get the protection and the space that they need.