What do you know about hot air balloons?

A hot air balloon is a type of aircraft. It is lifted by heating the air inside the balloon, usually with fire.

The hot air balloon is the oldest form of flying technology that can successfully carry people. The earliest use of hot air to make objects fly was made in Ancient China. They sent paper lanterns into the air for signalling.

The first hot air balloon to carry a person was invented by the Montgolfier brothers. On 19 September 1783, they demonstrated their invention at the French court in Paris. The passengers were a sheep, a duck and a rooster. They flew for 480 metres. The first flight carrying a person was on 15 October 1783. It carried Jacques-Etienne Montgolfier. The balloon was attached to the ground by a rope. The first free flight, without being attached to the ground, was a few weeks later, on 21 November 1783.

A hot air balloon festival is a type of  an air show. It is where ballooners display and fly their balloons together. During these events, they fly in the morning and in the evening if the conditions allow it. People can enjoy a balloon flight if they pay. There are many activities. Sometimes, the balloons are lit up against the night sky. 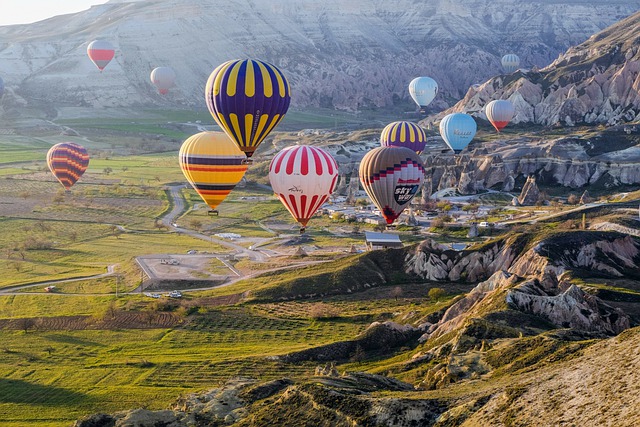 At these festivals, people can see different shapes of balloons. Usually, they are kind of round but they may have forms. Some hot air balloons are designed to look like animals, various objects and even cartoon characters.