In this classic fairy tale, an acorn falls on Chicken Licken’s head and she decides she must tell the king that the sky is falling down! On the way she meets many other feathered friends, and one cunning fox…

Read the fairy tale and do the tasks.

One morning Chicken Licken was walking along the road when a small acorn fell, and landed right on her head. She was surprised and very scared because she thought it was a piece of the sky. She was sure the sky was falling in. She began to hurry down the road to the King’s palace to tell him the terrible news.

Now Chicken Licken, Henny Penny, Cocky Locky and Ducky Wucky all hurried down the road and soon they met their old friend Goosey Woosey. They told him immediately about the sky falling in. As soon as he heard the news, he wanted to come with them. So now Chicken Licken, Henny Penny, Cocky Locky, Ducky Wucky and Goosey Woosey all hurried together down the road to the King’s castle.

Now Foxy Woxy was a clever fellow. He didn’t believe for a minute that the sky was really falling in, but he knew that Chicken Licken and her friends would make a wonderful Sunday dinner. So he pretended to be just as surprised and scared as they were and said, “Come follow me. I’ll take you to the King”. So Chicken Licken, Henny Penny, Cocky Locky, Ducky Wucky, Goosey Woosey, and Turkey Lurkey all followed Foxy Woxy and nobody ever saw them again . And nobody told the King. 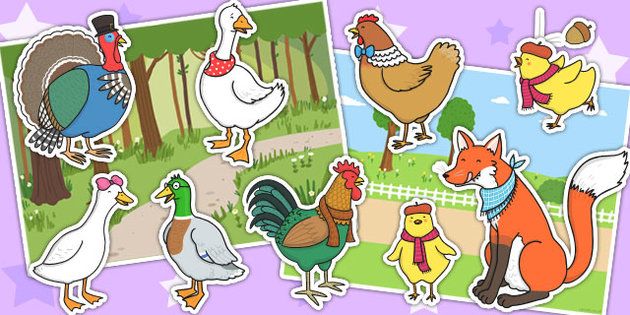 Task 2. Can you say why the story is so sad?

A.       The story is so sad because the birds believed Foxy Woxy and Foxy ate them.

C.       Foxy Woxy pretended to believe that the sky was falling in.

Task 3. What can you tell the birds when they follow the fox?

The moral of the traditional Chicken Licken story is to have courage, even when it feels like the sky is falling. It can also be interpreted as: “Do not believe everything you are told”. The phrase “The sky is falling!” is a common idiom indicating a hysterical or mistaken belief that disaster is imminent.

The sky is not falling. Always believe in yourself, believe in future, trust life, be powerful and creative.