Read about the Vaquita Endangered Species

Hi, I’m Ruslana. People all over the world are worried about what’s happening to the environment. Many plants and animals are in danger. When a plant or animal is gone forever, we say it is extinct. Endangered species are groups of plants or animals that are in danger of becoming extinct. I’d like to share some information about the vaquita endangered species which is on the brink of extinction.

Vaquita, the world’s rarest marine mammal, is on the edge of extinction, about 30 individuals remaining.

This little porpoise wasn’t discovered until 1958 and a little over half a century later, we are on the brink of losing them forever.

The vaquita has a large dark ring around its eyes and dark patches on its lips that form a thin line from the mouth to the pectoral fins. Its top is dark gray, its sides are pale gray, and its underside is white with long, light gray markings.

They are most often found close to shore in the Gulf’s shallow waters, although they quickly swim away if a boat approaches.

Vaquita can be translated from Spanish to mean ‘little cow’.

They are the rarest sea mammals in existence.

Vaquitas are likened to porpoises and often confused with dolphins, but they are smaller, have a chunkier body and have a rounded head with no snout.

Dolphins, whales and vaquitas are all in the same family known as cetaceans, which are large sea mammals characterised by their appearance, intelligence and carnivorous (meat eating) diets. They also need to come to the surface to breathe.

Unlike dolphins that will follow boats, vaquitas are shy, private creatures and as such very little is known about them.  In fact, these little sea creatures were not discovered until as late as 1958 when three vaquita skulls were discovered on a beach.

Vaquitas can communicate with each other and navigate using sonar.

The fishing industry, pollution and habitat destruction from the dam built in the Colorado River threaten its survival. 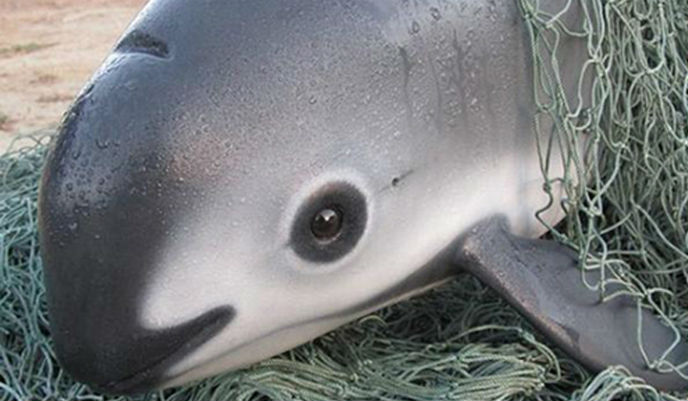 Illegal fishing for an exotic fish, the totoaba is the biggest threat to the Vaquita. The gillnets used frequently entangle and drown vaquitas. Vaquita are often caught and drowned in gillnets used by illegal fishing operations in marine protected areas within Mexico’s Gulf of California.

July 7 is International Save the Vaquita Day. The vaquita endangered species are nicknamed the “pandas of the sea”. We must protect these shy marine mammals.