Galileo Galilei (1564 – 1642 is an Italian natural philosopher, astronomer, and mathematician who made fundamental contributions to the sciences of motion, astronomy and to the development of the scientific method.

Galileo was born in Pisa, Italy where he grew up with his brothers and sisters during the Italian Renaissance. His father was a lute player, a music teacher and a music theorist. His family moved to the city of Florence when he was ten years old. In his middle teens Galileo attended the monastery school at Vallombrosa, near Florence, and he was considered becoming a monk.

Galileo was an accomplished musician and an excellent student. When he was 16, Galileo enrolled at the University of Pisa to study medicine. Instead, he became interested in mathematics and physics. Galileo left the university in 1585 without earning a degree and got a job as a teacher.

During the time of Galileo Galilei , there weren’t really scientists as we know them today. People studied the works of the classical philosophers and thinkers such as Aristotle. They didn’t run experiments or test out the ideas. They just believed them to be true. Galileo, however, had different ideas. He wanted to test the principals and see if he could observe them in the real world. He basically started what is now known as the scientific method: test, test and test again.

A legend says that he climbed the Leaning Tower of Pisa, and dropped cannonballs of different weights, to see which would strike the ground first. Even though their weights were not the same, they hit the ground at the same time. Galileo found that objects fall to the ground at the same rate, unless things like wind resistance change the rate. This went against the views of Aristotle, an ancient philosopher whose theory was different. Galileo’s findings were ignored by most people, and Aristotle’s view was still accepted as correct until Isaac Newton proved Galileo was right. This also led to Newton creating his Law of Gravity.

Galileo’s experiments made some people angry, however. They didn’t want the traditional views to be questioned. In 1592, Galileo moved from Pisa to the University of Padua, where he was permitted to experiment and discuss new ideas.

For many years, scientists believed that the Sun and the planets revolved around the Earth. But Galileo was the first scientist to prove that this wasn’t actually correct, and that in fact the Earth and the planets revolved around the Sun. However, the powerful Catholic Church considered Galileo’s ideas as heresy. At first they sentenced him to life in prison, but later allowed him to live at his home in Tuscany under house arrest. Galileo continued to write while under house arrest.

Some Interesting Facts about Galileo Galilei 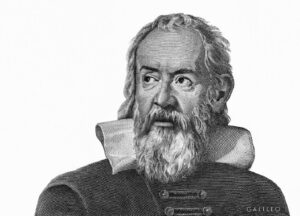