People always wanted to fly. Read about some flight ideas from the history of flying.

The Story of Daedalus and Icarus 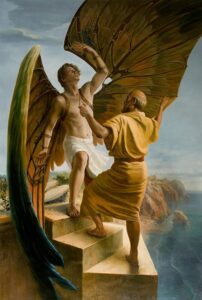 In Greek mythology Daedalus was a famous artist, architect and inventor who worked on the island of Crete. He built a labyrinth where king Minos kept the Minotaur, a terrible monster who had a human body and a bull’s head. It was very complicated to find the way out of the labyrinth. Since Daedalus had designed it, he knew the secret. King Minos was afraid that Daedalus would tell someone the secret, so he didn’t let him leave the island. But Daedalus and his son Icarus wanted to leave.

After a lot of thinking, Daedalus got an idea, “We are going to escape by air!” They took some feathers, stuck them into wax and put them on their arms. They flew above the wall of the prison. Icarus was so happy he could fly that he forgot about his father’s advice not to fly too high. He got too close to the sun and the wax melted. Icarus crashed into the sea and drowned.

This story tells us that even thousands of years ago people wanted to fly.

Leonardo da Vinci (1452 – 1519) was a famous artist and engineer who lived in Italy and made drawings and descriptions of some very interesting machines that he had invented. He was left-handed and he wrote all his notes in reverse. You could only read them in the mirror. One of his drawings from 1488 called “Design of a Flying Machine”. This flying machine had wings like a bird and pedals like a bicycle. Leonardo wanted to launch his flying machine from Monte Ceceri, Mount Swan, in Italy, but as far as we know, he never did.

The brothers Wilbur and Orville Wright had always wanted to fly. They lived in Ohio and ran a small bicycle factory. They were deeply shocked when they read in the newspapers about the tragic death of Otto Lilienthal, a German who published a book about flying like birds. They decided to continue Lilienthal’s experiments with gliders. They even tied a glider to a horse which pulled it.

He was fascinated by the idea of flight. Based on his studies of birds and how they fly, he wrote a book on aerodynamics that was published in 1889 and this text was used by the Wright Brothers as the basis for their designs.

After more than 2500 flights, he was killed when he lost control because of a sudden strong wind and crashed into the ground.

After some time they built the first plane with a Packard engine. They called it flyer. It had two sets of wings and two propellers. The pilot sat out in front in the open air.

In December 1903, in Kitty Hawk, North Carolina, Wilbur Wright made the first airplane flight in history staying in the air for twelve seconds. The same day he flew two more times and managed to stay in the air for fifty-nine seconds. And this was just the beginning of the real history of flying.

Do these tasks to the texts about the history of flying

Task 1. Find the words which mean

a. parts of a bicycle
b. something that tells you what something is like
c. backwards
d. send into sky

Task 4. Answer the questions to the texts about the history of flying.

Task 5. Speak about some flight ideas you’ve read in this text about the history of flying.

Task 6. Air sports are considered to be extreme. Would you like to try such air sports as: