Some Facts from Pablo Picasso’s Biography

“Every child is an artist. The trouble is how to remain an artist once he grows up.”
Pablo Picasso

Pablo Picasso is considered the greatest and one of the most influential artists of the 20th century. Many people consider him to be one of the greatest in all of art history. He painted in a number of different styles and created many unique contributions to the world of art. 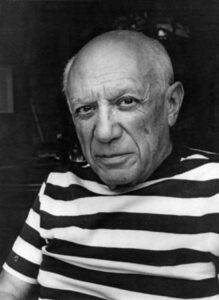 He was a Spanish painter, culptor, printmaker, ceramicist and theatre designer who spent most of his adult life in France. Among his most famous works are the Guernica (1937), a dramatic portrayal of the bombing of Guernica by German and Italian air forces during the Spanish Civil War.

His father was a drawing teacher. At 10 Pablo became his father’s pupil and at the age of 13 he held his first exhibition.Picasso demonstrated extraordinary artistic talent in his early years, painting in a naturalistic manner through his childhood. His first word was ‘piz’, short for the Spanish word for pencil. He painted his first painting aged nine, depicting a bullfighter. He didn’t enjoy school.

Picasso was very experimental and changed the way we interpreted the world through art, embracing innovations and progress.

His work is split into different stages:

Picasso continued his work up to his death in 1973. Picasso was known as a very moody person and he also displayed this in his paintings. Sometimes he was thoughtful, even sad, and at other times he could be very humorous. Picasso was never satisfied with his own work and he never stopped experimenting. For his great imagination and skill he is called “El Maestro” of modern art.