Read about Some Thanksgiving Customs

Thanksgiving Day is on the fourth Thursday in November. It is a time for big family reunions and big dinners, a time to eat turkey, stuffing, corn, cranberry sauce, and pumpkin pie. But between endless bites of food, Americans also take time to feel grateful for whatever is good in their lives. Some people than God; others thank fate or their loved ones. And most people remember the small group of English colonists who gave Americans this delicious and meaningful holiday.

Today, when Americans celebrate Thanksgiving, they like to think that they are imitating that 1621 harvest festival in Plymouth. And in so e ways they are. The foods that are eaten are those that were part of the Plymouth diet – such as turkey, squash, corn and pumpkin. But in many ways the modern Thanksgiving dinner is quite different from the meal that the Plymouth colonists shared with their Indian neighbours.

To start with, the wild turkey that the Pilgrims hunted was somewhat different from today’s domesticated turkey.

Next, the Plymouth colonists didn’t have enough sugar to make the sweetened cranberry sauce that is considered and essential part of today’s Thanksgiving meal. If they had cranberries at all, they were probably in the turkey stuffing. If they had pumpkin, it was probably cut into pieces, not mashed and served in a pie.

Also, for today’s Thanksgiving dinner, most Americans set a beautiful table with a fancy tablecloth and the finest dishes, glassware, and silverware they have. The Pilgrims (like most early-seventeenth-century people) didn’t have forks. They picked up most of their food with their fingers, and then wiped their hands on very large napkins.

And, of course, few Americans eat their Thanksgiving dinner outside, as the Pilgrims did. 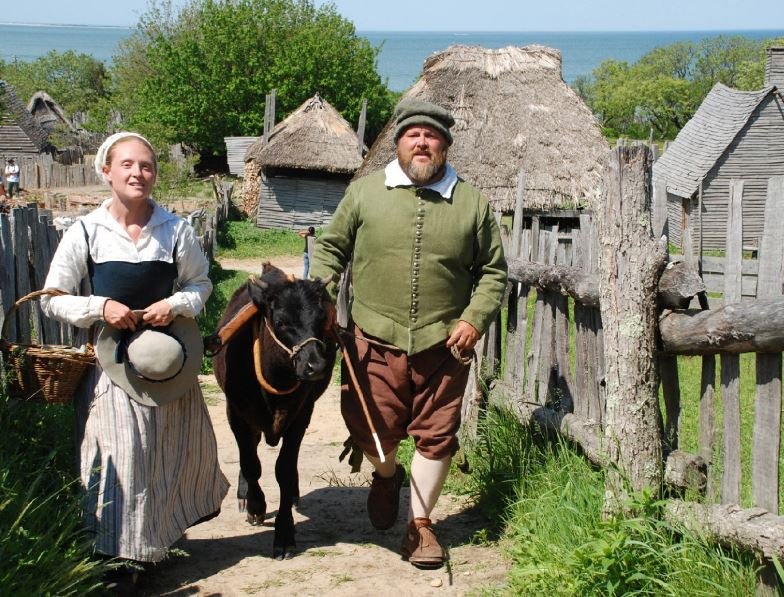 Every year, about 500,000 tourists take a journey into early American history by visiting Plymouth, Massachusetts. This modern city offers many opportunities for reliving the Pilgrim experience. In Plymouth Harbor, sightseers tour Mayflower II, a recently built ship similar to the original Mayflower. They see the famous Plymouth Rock. Then they spend a few hours walking through a recreation of the original Plymouth village as it looked in 1627. The site, called Plimoth Plantation, is just a few miles from the location of the original village.

Plimoth Plantation is “inhabited” by role-playing costumed guides who speak in many different English dialects, as the real Plymouth residents did. They also demonstrate a wide range of activities that were part of village life in the 1620s.