Do you know about the British Scout Association?

The British Scout Association was formed in 1908 after the appearance of a book “Scouting for Boys” written by Lieutenant-General Baden-Powell. Though the movement had started in Great Britain for British boys, it very quickly spread to other countries.

Baden Powell’s idea of training boys was that they should organize themselves into small natural groups of six or seven (the Patrol) under a boy leader (the Patrol Leader).

The training of boy scouts would be complimentary to their ordinary education: such things as mapping, signaling, knotting, first aid and all the skills that would arise from camping and similar outdoor activities.

To become a scout a boy must make a promise that he would do his best to do his duty to God and the King (Queen), to help other people and to obey the Scout Law.

From the beginning the left handshake, together with a special badge and the motto “Be Prepared”, was adopted as the sign of being a scout.

The scout movement was intended for boys from 11 to 14 or 15, but it was soon realized that programmes for younger and older boys were needed. 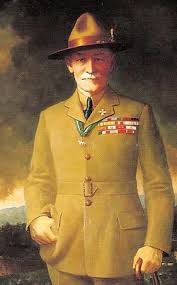 By 1916 Baden Powell had solved the problem of the younger and older boys by the introduction of Wolf Cubs with their own motto of “Do Your Best”, their uniform, their own badges and training system. The Wolf Cub pack is based on Kipling’s “Jungle Books”, that is, learning to survive (survival practice).

The older boys became Rover Scouts and later senior scouts. They carry on their scouting with expeditions on sea and land, at home and abroad. Scouting for older boys emphasizes personal fitness, social, vocational and cultural activities.

Several small units (Patrols) form a Troop, which is headed by the scout leader or scoutmaster. Scoutmasters are given considerable responsibility in training the members of their troops.

Sea Scouts started in Great Britain in 1910. Air Scouts appeared  in some countries in the 1930s.