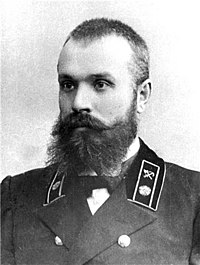 Yevhen Paton, a prominent Ukrainian scientist in the field of building bridges and welding, was born in a French town if Nice (ni:s) in 1870. He graduated from Polytechnical Institute in Dresden, and later – from the Institute of Engineers of Means of Communication in St. Petersburg.

From 1904 till 1939, with several breaks, Paton was a professor at the Polytechnical Institute in Kyiv. He made a valuable contribution to the science of designing bridges, the technology of their building and the methods of testing them. He was the author of several fundamental manuals on the building of bridges and some original projects for bridges and overpasses.

In 1929 he organized the Laboratory of Electric Welding where he was a director from 1934 till the last days of his life. Yevhen Paton died in Kyiv in 1953.

One of the longest bridges across the Dnipro (1. 543 kilometres long) is named after him. Yevhen Paton’s son, Borys (born in 1918) continued his father’s work. He became an academician, like his father, and for a very long time headed the Research Institute of Welding, named after his father. He worked out new methods of welding and laid the foundations of welding under water and in outer space.

Use these questions as a plan and tell about Yevhen Paton