Cuisine is the first thing people notice, when visiting a country. Ukrainian cuisine is closely linked to the customs, culture, and way of life of the Ukrainian people. It is famous for its diversity and flavours. The peculiar features of traditional Ukrainian food have been forming over centuries.

Ukraine is the second largest country in Europe. It is known for its rich soil and favorable climate. The neighboring countries, climate conditions, rich soil and hard-working people have influenced the complexity of the dishes. Ukrainian dishes are generously flavored with garlic which is often the main seasoning.

Ukrainians like to cook and eat tasty, homemade food. From old times they grew barley, rye and wheat. They also herded cattle, pigs and sheep. It is well reflected in national cuisine and traditions. For example, bread and wheat products are very important for Ukrainian people. On special occasions people cook korovai, paska or kalach. Korovai is usually served at weddings. Kalach is baked for Christmas. Its three strands represent the Holy Trinity. Paska is baked for Easter. Its main ingredients are milk, butter, eggs, sugar, flour and raisins.

People in Ukraine like to eat good and tasty food cooked of fresh products. Ukrainian women prefer to cook at home. And many of them are real masters at cooking. Since old time Ukrainian national cooking has been famous for great variety of tasty and useful dishes. Ukrainian women always collected recipes of cooking different dishes. This tradition is kept nowadays as well.

The most popular dish in Ukraine which every Ukrainian lady can cook is borshch. This thick and delicious soup is prepared with a variety of ingredients (up tp 20) including meat, cabbage, beetroots, mushrooms, beans, and even prunes, and served with sour cream. There is a proverb that says: “Each hostess has her borshch”. There are many regional varieties.

Soups are very popular in Ukraine. And you can find a lot of them in Ukrainian cuisine. The most popular of them are yushka, sherba (fish soup), chicken broth, noodle soup, pea soup, mushroom soup, buckwheat soup, soup with dumplings and milk soup. All of them are very tasty.

Salo or pork fat salted and spicy is eaten in thin slices on brown bread with garlic. Smoked version is especialy delicious. This well-established Ukrainian symbol of hospitality is usually served as an appetizer.

Holodets is the central dish served at all celebrations. Holodets is made of meat broth, frozen to a jelly-like state, with pieces of meat inside. One of the main components for this kind of aspic is pork leg. It is served with horseradish or mustard.

Holubtsi  are cabbage rolls stuffed with rice, spiced minced meat and vegetables and stewed slowly in the oven.

There are a lot of dishes cooked from flour. In Ukraine you can try varenyky, pancakes, halushkas and different kinds of pies.

Varenyky is a kind of dumpling stuffed with potatoes, meat, cheese, cabbage, meat, mushrooms or with cherries as a sweet dish. Varenyky are often mentioned in folk songs. 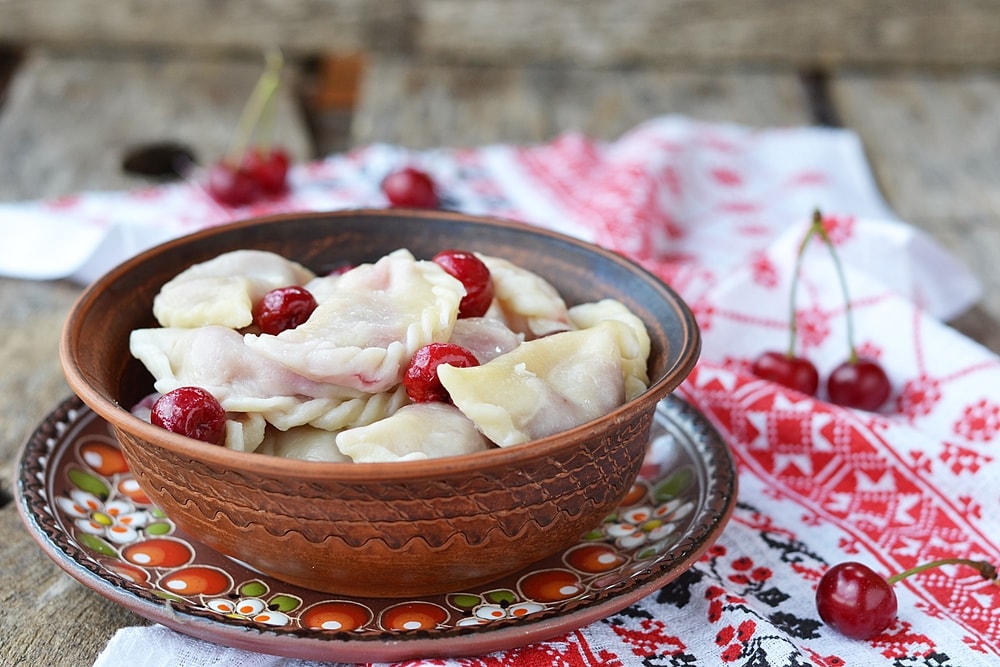 There are no holidays without pies, pampushky (type of fritters), baba (a tall cylindrical cake) and honey cakes.

Ukrainians like dairy products. Some samples: syrniki (cheese pancakes) and “riazhanka” (fermented baked milk). Syrniki are made of cottage cheese, flour, eggs and sugar. After being gently fried in a pan, syrniki is topped with jam, honey and sour cream.

Nalisniki are thin pancakes rolled and served with a stuffing, usually cottage cheese.

Of course, every region of Ukraine has its own recipes and traditions. There are thousands of other nourishing and tasty dishes in Ukrainian cuisine.