Do you know who was Marie Curie?

Marie Curie became the first woman to win a Nobel Prize and the first person — man or woman — to win the award twice. With her husband Pierre Curie, Marie’s efforts led to the discovery of polonium and radium and, after Pierre’s death, the further development of X-rays. The famed scientist died in 1934 of aplastic anemia likely caused by exposure to radiation.

Both of Curie’s parents were teachers. Her father, Wladyslaw, was a math and physics instructor. When she was only 10, Curie lost her mother, Bronislawa, to tuberculosis.

In 1891, Curie made her way to Paris and enrolled at the Sorbonne. She threw herself into her studies, but this dedication had a personal cost: with little money, Curie survived on buttered bread and tea, and her health sometimes suffered because of her poor diet.

Curie completed her master’s degree in physics in 1893 and earned another degree in mathematics the following year.

Marie married French physicist Pierre Curie on July 26, 1895. They were introduced by a colleague of Marie’s after she graduated from Sorbonne University.

Marie had received a commission to perform a study on different types of steel and their magnetic properties and needed a lab for her work. 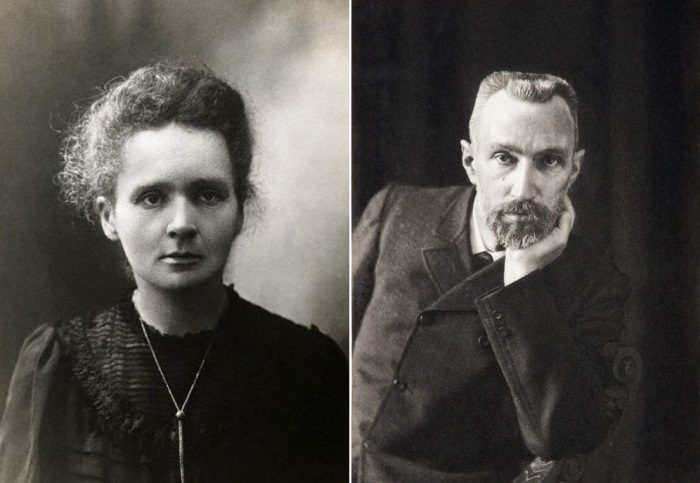 A romance developed between the brilliant pair, and they became a scientific dynamic duo who were completely devoted to one another. At first, Marie and Pierre worked on separate projects. But after Marie discovered radioactivity, Pierre put aside his own work to help her with her research.

Marie suffered a tremendous loss in 1906 when Pierre was killed in Paris after accidentally stepping in front of a horse-drawn wagon. Despite her tremendous grief, she took over his teaching post at the Sorbonne, becoming the institution’s first female professor.

Irène Joliot-Curie followed in her mother’s footsteps, winning the Nobel Prize in Chemistry in 1935. Joliot-Curie shared the honor with her husband, Frédéric Joliot, for their work on the synthesis of new radioactive elements.

In 1937, Ève Curie wrote the first of many biographies devoted to her famous mother, Madame Curie, which became a feature film a few years later.

Marie Curie won two Nobel Prizes, for physics in 1903 and for chemistry in 1911.