Hello! My name is Bogdan, and I’d like to tell you about my favourite film.

I like many films, but Titanic is my favourite.
It’s an epic romance and disaster film based on real events, directed, written and co-edited by James Cameron. The original language of the film is English. The main actors are Leonardo Di Caprio and Kate Winslet. 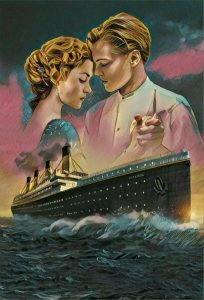 The story tells us about two young people, Rose and Jack, who fell in love on a shipboard. They were members of different social classes, Rose was rich and Jack was a poor artist who won a ticket on the ship in a lottery. But suddenly a tragedy happens, the ship on which they sailed, began to sink. Jack died in cold water, but Rose was saved.
I enjoyed this story about love, even there’s no happy ending. I liked the messages of the film. Firstly, there is no distinction between the rich and the poor. All people were scared and horrified when the ship of dreams hit an iceberg. It was good luck not wealth which helped 700 people to survive but more than 1,500 people died. Secondly, feelings of love and happiness are universal. Rose fell in love with Jack and she was more cheerful and sincere in a party with third class people than an aristocratic one. And finally,  we should value and enjoy every day of our life,  because life is too short.
The film is worth watching. I’m sure that you’ll like it too.
Bekreniova 2021-04-21T16:23:54+00:00 Categories: Bogdan, Film|Tags: film, film review|2 Comments