Dmitri Mendeleev was a Russian chemist and inventor. He is best remembered for formulating the Periodic Law and creating a farsighted version of the periodic table of elements. He used the Periodic Law not only to correct the then-accepted properties of some known elements, such as the valence and atomic weight of uranium, but also to predict the properties of eight elements that were yet to be discovered.

Dmitri Ivanovich Mendeleev was born in the village near Tobolsk in Siberia, to Ivan Pavlovich Mendeleev (1783–1847) and Maria DmitrievnaMendeleeva (1793–1850). His father worked as a school principal and a teacher of fine arts, politics and philosophy at the Tambov and Saratov gymnasiums. His mother came from a well-known family of Tobolsk merchants, founders of the first Siberian printing house.

Mendeleev was the youngest of 17 siblings, of whom “only 14 stayed alive to be baptized” according to Mendeleev’s brother Pavel, meaning the others died soon after their birth.

Unfortunately for the family’s financial well being, his father became blind and lost his teaching position. His mother was forced to work and she restarted her family’s abandoned glass factory. At the age of 13, after the passing of his father and the destruction of his mother’s factory by fire, Mendeleev attended the Gymnasium in Tobolsk.

In 1849, his mother took Dmitri Mendeleev across Russia from Siberia to Moscow with the aim of getting her son enrolled at the Moscow University. The university in Moscow did not accept him. The mother and son continued to Saint Petersburg to the father’s alma mater.

The now poor Mendeleev family relocated to Saint Petersburg, where he entered the Main Pedagogical Institute in 1850. After graduation, he contracted tuberculosis, causing him to move to the Crimean Peninsula on the northern coast of the Black Sea in 1855. While there, he became a science master of the 1st Simferopol Gymnasium. In 1857, he returned to Saint Petersburg with fully restored health.

Between 1859 and 1861, he worked on the capillarity of liquids and the workings of the spectroscope in Heidelberg.

Later in 1861, he published a textbook named Organic Chemistry. This won him the Demidov Prize of the Petersburg Academy of Sciences.

Dmitri Mendeleev became a professor at the Saint Petersburg Technological Institute and Saint Petersburg State University in 1864, and 1865, respectively. In 1865 he became Doctor of Science for his dissertation “On the Combinations of Water with Alcohol”. He achieved tenure in 1867 at St. Petersburg University and started to teach inorganic chemistry, while succeeding Voskresenskii to this post. and by 1871 he had transformed Saint Petersburg into an internationally recognized center for chemistry research. 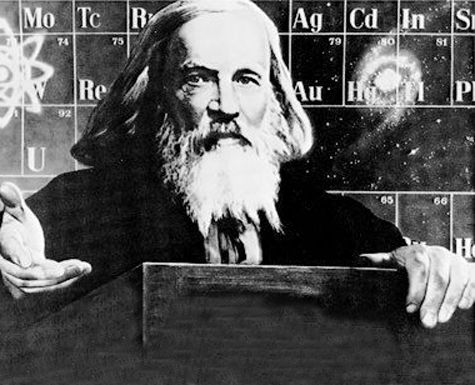 In 1863, there were 56 known elements with a new element being discovered at a rate of approximately one per year. Other scientists had previously identified periodicity of elements. John Newlands described a Law of Octaves, noting their periodicity according to relative atomic weight in 1864, publishing it in 1865.

After becoming a teacher in 1867, Mendeleev wrote the definitive textbook of his time: Principles of Chemistry (two volumes, 1868–1870). It was written as he was preparing a textbook for his course. This is when he made his most important discovery.

In 1907, Mendeleev died at the age of 72 in Saint Petersburg from influenza. His last words were to his physician: “Doctor, you have science, I have faith,” which is possibly a Jules Verne quote.