Do you know what an ukulele is?

Hi, I’m Diana. Last month I started to attend extra music classes and took up playing this musical instrument. Some people can think that it is easy to play the ukulele but to a person who never played any musical instrument it is very difficult. Would you like to know what ukulele is? Here is some information about it.

An ukulele is one of those instruments that are quite unique in their nature. Originated in Hawaii, the ukulele has played, and still plays a valuable role in the culture of this island.

Over time, the instrument has spread out from Hawaii and managed to reach just about every corner of the world. These days, it’s an instrument that brings joy to thousands of people around the globe.

Origins and History of an Ukulele

Back in 1878, the Hawaii Islands were one of the few places capable of producing large quantities of sugar cane. When new markets opened in California, plantation owners needed to spread their business to meet the growing demand. Because of this, a large number of workers from Portugal started arriving to the islands and the Portuguese community grew from mere 1% to a much larger number. As it usually happens, when immigrants arrive, they bring a part of their culture with them.

One of those innovations was a small stringed acoustic instrument called machete de braga. It was a simple instrument that featured four metal strings, but the locals simply fell in love with it. Most of the immigrants came from Madeira, and folks from Madeira loved their music.

As time went by, now already settled immigrants started modifying the machete. First they introduced some features from other similar stringed instruments which were popular back in the homeland, only to finally form the direct predecessor to the modern day ukulele.

The first official ukulele was constructed by three cabinet makers, who wanted to create something new and exciting.

Needless to say, ukulele became an instant hit. Ukulele became a big part of the Hawaiian culture. Once it was  established as a national instrument of Hawaii, it didn’t take long before the ukulele craze hit the United States, and later the entire world. 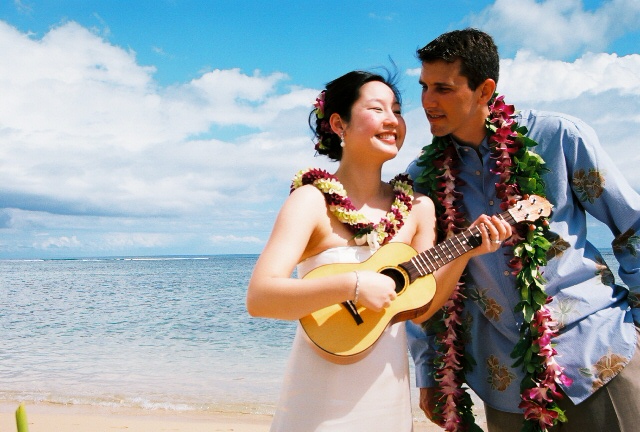 More about an ukulele

For starters, an ukulele is nothing more but a small guitar. An ukelele shares a lot of similarities with an acoustic guitar – more specifically the classical variety. We are talking shape, size, principle of operations and generally how the instrument behaves. However, ukelele is not only smaller, but it uses a completely different type of tuning, which means different chords and different playing techniques.

Unlike guitars, ukeleles have four strings and the standard tuning is G – C – E – A. Not only you are missing two strings, but you also have completely different keys on each of those four strings. That means that you simply can’t transfer chords and scales from a guitar to a ukulele.

The ukulele is not just a smaller acoustic guitar that you can tuck in your suitcase whenever you’re going to a vacation. Instead, it is an instrument that has quirks of its own.