What do you know about Rugby School?

Hi, I’m Liza and I’d like to tell you about Rugby school, one of the most famous British independent schools.

Rugby School is an independent co-educational day and boarding school in Rugby.

Rugby is a birthplace of the jet engine. In April 1937 Frank Whittle built the world’s first prototype jet engine at the British Thomson-Houston works in Rugby. Holography was invented in Rugby by the Hungarian inventor Dennis Gabor in 1947.

Rugby School was founded in 1567 as a free grammar school for local boys, it is one of the oldest independent schools in Britain.

It is one of the original seven Great Nine Public Schools defined by the Clarendon Commission of 1864. Rugby School was also the birthplace of Rugby football.

The sport of rugby is named after Rugby School, where the game was first played. The game is said to have been invented in 1823 when William Webb Ellis caught the ball while playing a game of football at school, and ran to the goal with it. Although there is doubt about whether this actually happened, Webb Ellis is still remembered as the sport’s inventor and the winner of the Rugby Union World Cup, held every four years, receives the Webb Ellis Cup. 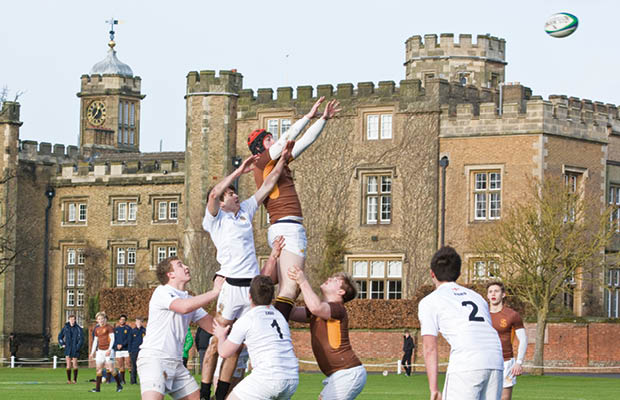 In 1845, a committee of Rugby schoolboys wrote the “Laws of Football as Played At Rugby School”, the first published set of laws for any code of football.

Rugby School has both day and boarding-pupils, the latter in the majority. Originally it was for boys only, but girls have been admitted to the sixth form since 1975. It went fully co-educational in 1992.

Rugby’s most famous headmaster was Thomas Arnold, appointed in 1828; he executed many reforms to the school curriculum and administration. Arnold’s and the school’s reputations were immortalised through Thomas Hughes’ book “Tom Brown’s School Days”. Arnold had three principles: religious and moral principle, gentlemanly conduct and academic performance.

In 1888 the appointment of Marie Bethell Beauclerc was the first appointment of a female teacher in an English boys’ public school and the first time shorthand (стенографія) had been taught in any such school. The shorthand course was popular with one hundred boys in the classes.

There have been a number of notable Rugbeians including the father of the sport of Rugby William Webb Ellis, Prime Minister Neville Chamberlain, author and mathematician Lewis Carroll, poet and cultural critic Mattew Arnold, the Irish writer Francis Stuart and others.