How Kyiv Was Founded

How Kyiv Was Founded

Let’s Read a Legend about Kyiv

The town was first raised on the high hill near the River Dnieper fifteen hundred years ago by the Polyane, and after a few centuries it grew into the grandiose capital of the Old Rus state.

Read the legend to get to know how Kyiv was founded.

Once there were three brothers: one was Kyi, another Shchek and the third Khoriv, and they had a sister called Lybid.

One day they were boating to a beautiful place on the bank of the Dnieper. They saw green hills covered with a thick forest. There was much game and lots of mushrooms and berries could be found there.

“This is a fine place,” said Kyi. “Let us settle here.” The three brothers settled on the three hills and they built a house for Lybid near a small stream that ran into the Dnieper.

Kyi, the eldest brother, was a tall strong handsome man with a sunburned face, dark eyes and black hair. He was reasonable, wise and highly generous.

Kyi was a fine boatman. He liked to ferry people across the Dnieper in his boats. He also was a gifted craftsman and made fine boats. People used to come from everywhere to buy his boats or to learn how to make them. Kyi loved the river and spent much time at and on the Dnieper.

Shchek, his younger brother, had a freckled face, green eyes and red hair. Shchek was kind but a little quick-tempered. He was a very good potter who made wonderful pots, jugs and basins out of clay. Shchek wanted his pots, jugs and basins to be really fine. If he did not like his jug or basin, he broke it with laugh and began to make a new one. He was never tired of his work and was famous for his good pottery among the Polyane.

Khoriv, their youngest brother, was known as a gentle and sincere young man with hazel eyes and fair hair. Khoriv was a fine psaltery-player and sang beautiful songs. But he was a talented craftsman too. He made wonderful silver rings, necklaces and ear-rings and his ornaments were admired by the Polyane women and girls.

Their young sister Lybid was a pretty girl with blue eyes and long golden hair. She was gentle and modest. Lybid was a very good spinner and her snow-white linen was famous among the Polyane women.

The three brothers loved their sister very much and took care of her. Kyi made a fine boat for Lybid and often brought her fish. Shchek presented Lybid with his best jugs, pots and basins. Khoriv made the most beautiful rings and ear-rings for his sister. Lybid loved her brothers and she wove snow-white linen for their shirts. 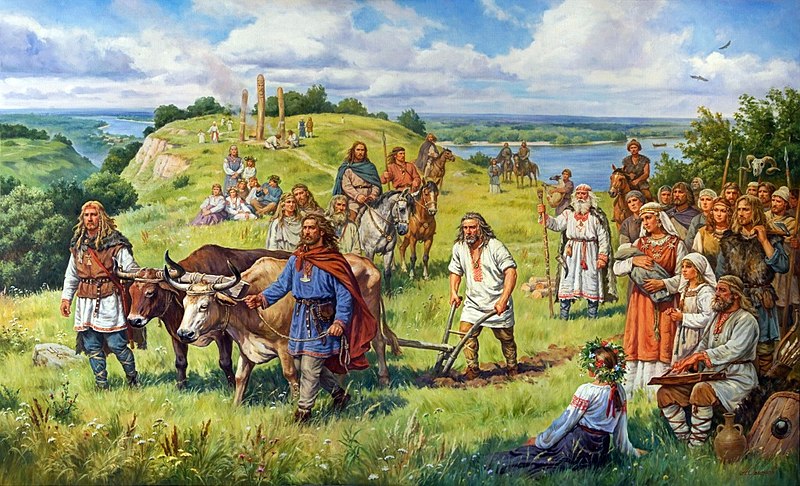 By and by many people settled around the three hills near the Dnieper. The three brothers always helped their neighbours.

For a long time the people lived happily, but one day an Avar tribe came to their land.

The invaders robbed the Polyane houses and burnt them down. They wanted to make the people slaves. The Polyane were brave and fearless. They did not run from the enemies but began to fight. They bravely defended their homes, their wives and children.

Kyi, Shchek and Khoriv were in the first ranks of the fighters. The three brothers fought bravely and killed many of their enemies. Kyi was always in front of the Polyane. He had a big solid oar in his hands which he used as his weapon.

The Polyane tribe and the Avar tibe fought for many days but no side could win. The terrible battle went on and on. Then the chief of the Avar tribe said, “Let us have a single combat between two warriors. I’ll fight for my people and one of your warriors will fight for your people. If I win, your people will pay us a big tribute every year. If I am defeated, my people will leave your land forever.”

Shchek and Khoriv were eager to fight but Kyi said, “I am the eldest brother, I will fight.”

The single combat began. It was the most terrible combat that took place on the banks of the Dnieper. Long and bitter was the struggle, the Avar chief was a man of great strength and Kyi could not overcome him.

At last the Avar chief aimed the spear at Kyi’s heart. Kyi threatened with his oar. There was a terrible blow and … the spear and the oar were broken.

“Come then, my hands will serve me as they served me in my work”, cried Kyi.

He seized the Avar chief, lifted him into the air and threw him into the Dnieper. That was the end of the enemy.

The Avar tribe ran away as quickly as it could.

Great was the joy of the Polyane, and the people said, “You have won the victory, Kyi. You are both strong and wise. You are honest and we respect you. Be our Prince.”

Kyi became the first Prince of the Polyane tribe. He said to his people, “We must unite and we must always be ready to defend our land and our people. That’s why we must build a high wall around our settlement. It will defend us from enemies.” And the Polyane built the first walled town on one of the hills at the River Dnieper and named it Kyiv in honour of their Prince.