What do you know about Wales?

Read some interesting facts about Wales.

1301 – After defeating the native princes of Wales, King Edward I of England named his son “Prince of Wales”. Since then the eldest son of the king or queen of England has traditionally been given this title.

The First Prince of Wales

Edward I, King of England conquered Wales. The two great Welsh leaders, Llewellyn and his brother David, had been killed. But the Welsh people, though they were beaten, were very rebellious. They had no great leader, but there were a number of chieftains most of whom were jealous of one another and at last three or four of these chieftains came to see Edward, who with his wife Eleanor, was staying at Caernarvon Castle, to tell him their complaints. They wanted to be ruled not by an English King, but by a Prince of Wales, born in Wales, of royal blood, and not speaking English or French. They wanted a prince whose life was good, and who had not wronged any man. Edward, after a little thought, told them to ask all the chiefs and their followers to come to Caernarvon Castle in a week’s time and he would give them what they had asked, a Prince of Wales who fulfilled all their conditions.

So the next week the great square outside the castle was crowded with excited people, all wondering which of their chieftains Edward had chosen. Edward standing on the balcony of the castle addressed chieftains and the people of Wales that his son, a prince of royal blood, born a week ago in Wales, in Caernarvon Castle, spoke no word in English and had wronged no man alive would be the Prince of Wales. The chiefs were angry and disappointed, but the Welsh people were pleased. And from that day to this, the eldest son of the King and Queen of England has always been the Prince of Wales. 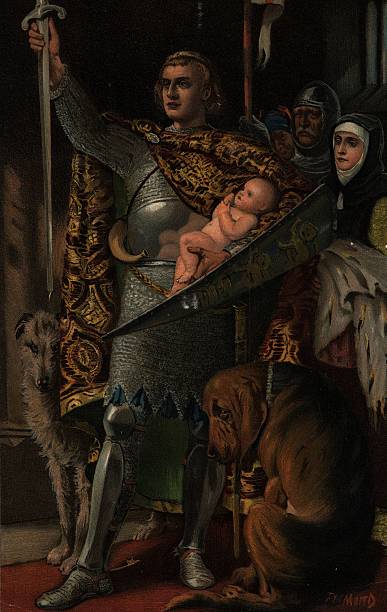 1536 – Wales was brought into the English system of national and local government by the Act of Union.

1850 – In the 19th century, the industrial revolution completely changed the face of South Wales. Workers came in large numbers from England and Ireland. 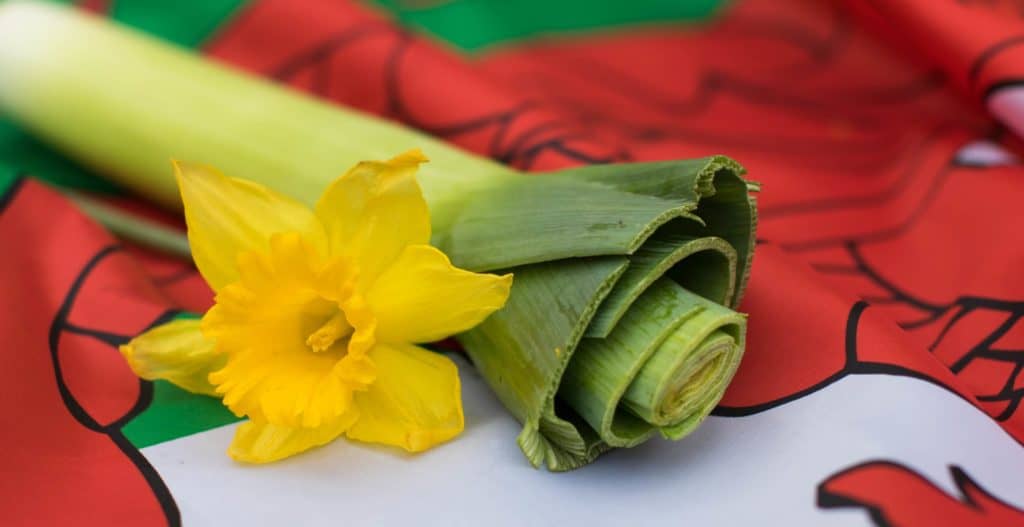 The patron saint of Wales is St. David. Welshmen all over the world celebrate St. David’s Day by wearing either leeks of daffodils. The link between the leek and St. David is the belief that he is supposed to have lived for several years on bread and wild leeks.

The daffodil is also closely associated with St. David’s Day, due to the belief that it flowers on that day. It became an alternative to the Leek as a Welsh emblem in the present century, because some thought the leek vulgar.

The language of the people of Wales is Welsh. Welsh is one of Celtic languages like Scottish and Irish Gaelic. The Welsh Language Act of 1967 said that all official documents should be in both languages, and most road signs are printed in English and Welsh. At secondary schools almost 50 per cent of all pupils learn Welsh as a first or second language. Welsh people are proud of their national language and culture and they are very proud of Wales, too.

What do the Welsh Wear? 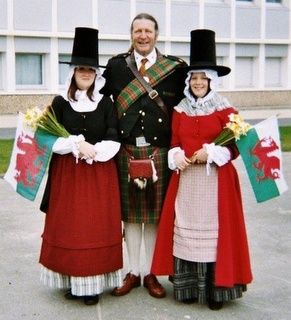 They wear the same things as the English except on special occasions. Then, a Welsh woman wears a red cloak, a long skirt, an apron, and a high black hat on her head. The men do not have a national costume. “In any case, we’ve no money left when we’ve bought our wives their clothes,” they say.

What’s in a Name?

The most common Welsh names were all originally Christian names in some form: Dylan, Thomas, Roger, Davies (a form of David), Geoffrey, Jones (from John), David, Williams, etc. Many other names come from the traditions of calling a child “son of” his father using the Welsh word ap (or ab). This “p” can be found at the beginning of many common Welsh names, eg Gary Pritchard, which is the same as English Richardson. Other examples are Prees, Price, Parry, and Pugh.

Welshmen living in England are often called by nickname “Taffy”. This may come from the River Taff, which runs through the capital Cardiff, or it may come from Dafydd, the Welsh form of David.

Rugby Union is a national game of Wales. The rules of the game are rather complicated but mainly involve the carrying of an egg-shaped ball over your opponents’ line and pressing it firmly on the ground to score a try. A team consists of fifteen players, eight of whom are usually much bigger and heavier than the rest. Although the game seems to be similar to American football, the players are not allowed to throw the ball forward.

The Welsh people, especially in rural areas, are fond of folk music, poetry and drama. Some play the harp. There are many choirs in Wales, the standards of singing is very high. And the Welsh sing at Eisteddfod for days.