Write a review of your favourite film

Hi, I’m Ruslana. One of my favourite films is Thor.

Thor is a 2011 American superhero film based on the Marvel Comics character of the same name, produced by Marvel Studios and distributed by Paramount Pictures.

The film was directed by Kenneth Branagh. Chris Hemsworth as the title character, alongside Natalie Portman and Tom Hiddleston are starring.

Thor, the God of Thunder 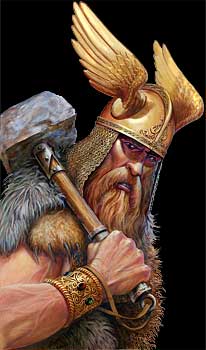 Thor is the red-haired and bearded god of thunder in Norse mythology. He is the son of Odin and Jord.

According to writings known as sagas, Thor owned a short-handled war hammer Mjolnir. When the hammer was thrown, it returned magically to the owner. The strike of the hammer caused thunderclaps. With the hammer, Thor performed his giant-killing duties.

In English, Thursday is named after Thor.

As the son of Odin, king of the Norse gods, Thor will soon inherit the throne of Asgard from his aging father. However, on the day that he is to be crowned, Thor reacts with brutality when the gods’ enemies, the Frost Giants, enter the palace in violation of their treaty. As punishment, Odin banishes Thor to Earth. While Loki, Thor’s brother, plots mischief in Asgard, Thor, now stripped of his powers, faces his greatest threat.

With help from scientist Jane Foster and her team, Thor must learn the true virtue of being a hero and return
home to stop Loki and save Asgard from destruction. Thor, the son of Odin, uses his mighty abilities as the God of Thunder to protect his home Asgard and planet Earth alike.

The film has fascinating computer animation. The acting is convincing. The film is praised for its action scenes, romantic moments, and visual effects. The actors are good looking. The music is catchy. I recommend this film to those who love fantasy and adventures. What is more it’s a good chance to get to know Vikings’ myths.