Do Reading Test 1 Year 7 to develop your reading skills.

The owner of “The George” was feeling sad. He did his best to make his pub a comfortable, pleasant place. The beer was good, the food was delicious and the prices were reasonable. But his pub was never full. One day, an old man entered the place. There were no people in the pub. He asked, “Why are you so depressed?” After listening to
a sad story, the man said, “Change the name of the pub”. “That’s impossible!” said the owner. “It’s been called “The George” for many generations and it is very well known”. “Change the name! You must call it “The Five Bells” and have six bells hanging at the front door”.

The owner agreed to give it a try. Things changed. All the passers­by came in to point out the mistake. Each one thought he was the first to notice it. The pub impressed them. They felt like at home and stayed for a drink or two. The things have been good since then.

1.What did the man do to make his pub a comfortable place?

a. He invited many people.

b. He cooked tasty food.

c. He painted the door green.

2. How were things going on in the pub?

a. Everything was very good.

b. The pub owner felt great.

d. The owner could earn much money there.

a. since the times it was built

b. after an old man had visited it

c. before the man bought it

d. because that was the pub owner’s name

a. there were many people there

b. the pub owner was very sad

c. something was burning in the kitchen

d. five bells were hanging on the wall

a. to prepare a different kind of food

b. to organize a party

c. to change the pub’s name

d. to tell his story to the customers

a. to look at the bells

b. to enjoy the food

c. to tell the owner about the mistake

d. to listen to the pub owner’s stories

1.The pub was always full of visitors and clients.

2. Clients didn’t want to go to the pub because of its high prices.

3. The owner of the pub didn’t want to take the old man’s offer.

Although Leonardo da Vinci drew some rough sketches of a thing that looked 2 _____ , the Frenchman De Sivrac built the first bicycle­type vehicle in 1690. It was referred to 3 _____. However, it did not have pedals. Those were added in 1840 by a Scottish blacksmith, Kirkpatrick Macmillan, 4 _____ .

On a penny-­farthing bicycle, one pedal gave the wheel one turn. A lot of pedalling was needed 5 _____ ! With the invention of gears, bicycles could move faster. Air­filled tyres were used on bicycles before they were used on motorcars. The bicycle as we know it today, 6 _____ — looks almost exactly the same as the one from 1900.

A. as many as motorcars

B. as a hobbyhorse

C. with two wheels of the same size

D. who is credited with inventing the real bicycle

G. to get around 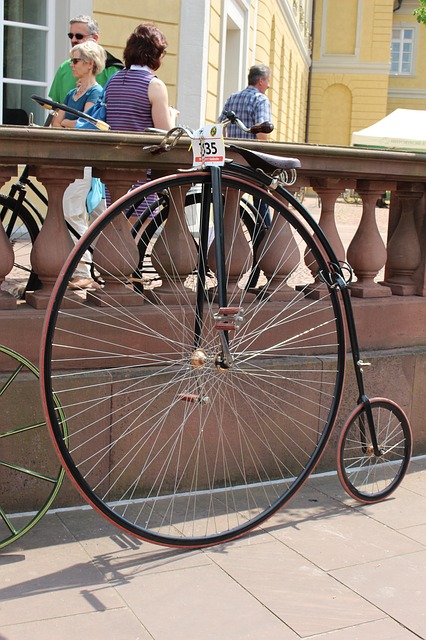 A penny-farthing bicycle is an early type of bicycle with a very large front wheel and a small rear wheel.

Gear is one of a set of toothed wheels that work together to alter the relation between the speed of a driving mechanism (such as the engine of a vehicle or the crank of a bicycle) and the speed of the driven parts (the wheels).

A tyre is a rubber covering, typically inflated or surrounding an inflated inner tube, placed around a wheel to form a flexible contact with the road.