Political System of the United Kingdom

Political System of the United Kingdom

The United Kingdom is a constitutional or parliamentary monarchy. It means that it has a monarch (either a king or a queen) as its Head of State but the monarch has very little power. The Queen (or King) reigns but she (he) doesn’t rule. Parliament and the existent government have the power. Parliament and the monarch have different roles and they only meet together on symbolic occasions such as the coronation of a new monarch or the traditional annual opening of the Parliament.

There is no written constitution in Britain. The rules for governing the country have been developed over the centuries. More than a thousand years ago, before the Norman Conquest in 1066, the Anglo-Saxon kings consulted the Great Council (an assembly of the leading men from each district) before taking major decisions. Between 1066 and 1215, the king ruled alone, but in 1215 the nobles forced King John to accept Magna Carta (the Great Charter), which took away some of the king’s powers. In 1264 the first parliament of nobles met together. Since then the British Constitution has grown up slowly as a result of countless Acts of Parliament. There have been no violent changes in the constitution since the “bloodless revolution” of 1688 when the Parliament invited William and Mary to become Britain’s first constitutional monarchs who could rule only with the support of the Parliament. The Bill of Rights in 1689 was the first step towards constitutional monarch because it prevented the monarch from making laws or raising the army without Parliament’s approval. Since 1689 the power of Parliament has grown steadily while the power of the monarch has weakened. 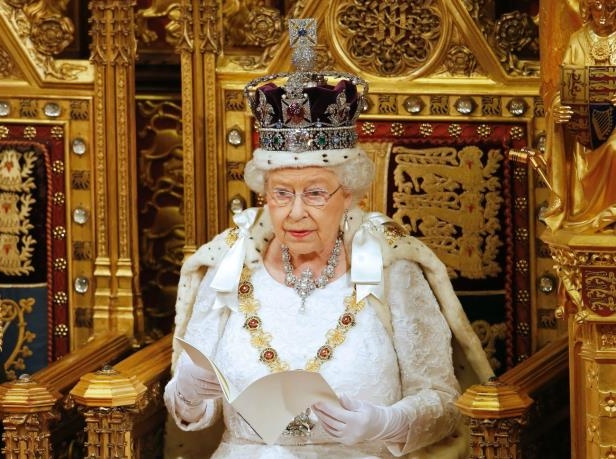 The present British monarch is Queen Elizabeth II (since 1953) and the next in line to the throne is her son, Charles, the Prince of Wales, and then his son, Prince William of Wales.

Britain is a democracy. Men and women over 18 have the right to vote, but it is not compulsory. They have the right to elect a Member of Parliament (M.P.) for their electoral area (constituency). Most MPs belong to a different political party. Although there is no limit to the number of political parties, and at present there are more than 100 of them, Britain in reality has a two-party system of government, since most people vote either Labour or Conservative.

The party that wins the most seats in a general election forms the government and its leader becomes the Prime Minister, the head of the government. He usually takes policy decisions with the agreement of the Cabinet of Ministers. The power of the Cabinet, in its turn, is controlled by the Parliament, for no bill can become law until it is passed by an Act of Parliament. The first woman Prime Minister in the history of Britain was Margaret Thatcher, the leader of the Conservative party from 1979 to 1990.

All important bills are presented to the House of Commons (the lower chamber of the Parliament, all 659 members of which are elected by people), where they are explained and debated. If they receive a majority vote they go to the House of Lords (the upper chamber consisting of 92 hereditary or life-time peers, clergy, and supreme judges) and after that to the monarch to be signed. Although a bill must be supported by all three bodies, the House of Lords has only limited powers, and the monarch has not refused to sign any bill for a bout 200 years. The monarch always acts on the advice of the Prime Minister. So the House of Commons is the main law-making body while the Cabinet of Ministers and the government are the main executive bodies.

British Parliament, the House of Commons

Scotland and Wales have their own governments: the Scottish Parliament in Edinburgh and the Welsh Assembly in Cardiff. Both opened in 1999.

In Northern Ireland the situation is more complicated. Because of the need to deal with politically inspired violence and terrorism, the Government assumed direct rule over Northern Ireland in 1972. Since then, several plans have been put forward by the successive governments in an effort to establish and administration acceptable both to Protestant and Catholic Communities. Due to the old-time religious enmity, lots of people have lost their lives a s a result of the terrorists’ attempts to achieve their aims through violence.

There are 14 British overseas territories in which Britain is responsible for their defence, internal security and foreign relations. British policy is to give independence to those overseas territories that want it, and not to force it on those which do not. The territories include British Virgin Islands, Cayman Islands, Falkland Islands, Gibraltar and some others. According to this policy Britain returned Hong Kong to China in 1997.

Great Britain is the member of the Commonwealth which is a voluntary association of independent states that originated as a result of dismantling of the British Empire after 1945. The British monarch is the Head of the Commonwealth and also the Head of State of 16 member countries such as Australia, New Zealand, Canada, the Bahamas and some others.

Read the following statements and decide if they are true or false.