Who is your favourite literary character?

Robinson Crusoe by Daniel Defoe is my favourite literary character.

Briefly about the Author 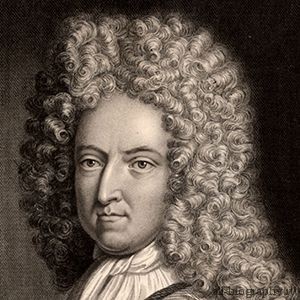 Daniel Defoe  (c. 1660 – 24 April 1731), born Daniel Foe, was an English trader, writer, journalist, pamphleteer and spy. He is most famous for his novel Robinson Crusoe, which is second only to the Bible in its number of translations.

Daniel Defoe was the founder of the realistic novel. He was also a brilliant journalist and in many ways the father of modern English periodicals. He founded and paved the way for many magazines ( “The Revue”, “The Spectator”).

Daniel Defoe was born in London, his father, a butcher, was wealthy enough to give his son a good education. Defoe was to become a priest, but it was his cherished desire to become wealthy. His wish was never fullfilled. He was bankrupt several times. He was always in deep debt. The only branch of business in which he proved to be succesful was journalism and literature.

When Defoe was about 23 he started writting pamphlets on question of the hour. He started writing pamphlets praising King William III, who was supported by the Whig party. No matter in whose defence his brilliant pamphlets were written their irony was so subtle, that the enemy didn’t understand it at first. But as soon as his enemy realised the real character of the pamphlets Defoe was sentenced to 7 years of inprisonment. It was a cruel punishment, and when they came for him to be set free, people carried him on their shoulders. This was the climax of his political career and the end of it.

In 1719, he tried his hand at another kind of literature – fiction, and wrote the novel he is now best known, “Robison Crusoe“. After the book was published, Defoe became famous and rich and was able to pay his creditors in full.

Defoe was a prolific and versatile writer, producing more than three hundred works — books, pamphlets, and journals—on diverse topics, including politics, crime, religion, marriage, psychology, and the supernatural. He was also a pioneer of business journalism and economic journalism.

Other novels written by Daniel Defoe were also very much talked about during his lifetime, but we do not hear much about them now. For example “Captain Singleton“(1720), “Moll Flanders“(1722). 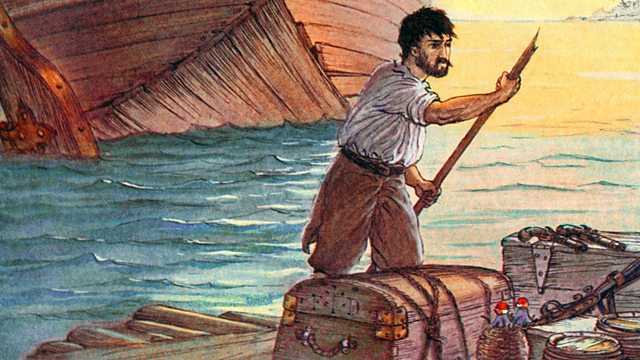 I am fond of reading books about voyages and new discoveries. One of my favourite literary characters is Robinson Crusoe. The famous novel “Robinson Crusoe” was written by Daniel Defoe in 1719.

The novel is a praise to human labour. Labour and fortitude help Robinson to endure hardships. They save him from despair. The very process of hard work gives him satisfaction.

The charm of the novel lies in Robinson as a person. Defoe shows the development of his hero. At the beginning of the story we see an unexperienced youth, a rather frivolous boy, who then becomes a strong-willed man, able to withstand all the calamities of his unusual destiny.

Robinson Crusoe’s most characteristic trait is his optimism. His guiding principle in life became “never say die”. Sometimes, of course, especially during earthquakes or when he was ill, panic overtook him, but never for long. He had confidence in himself and believed it was within the power of man to overcome all difficulties and hardships.

Another of Crusoe’s good qualities which saved him from despair was his ability to put his whole heart into everything he did. He was an enthusiastic worker and always hoped for the best. 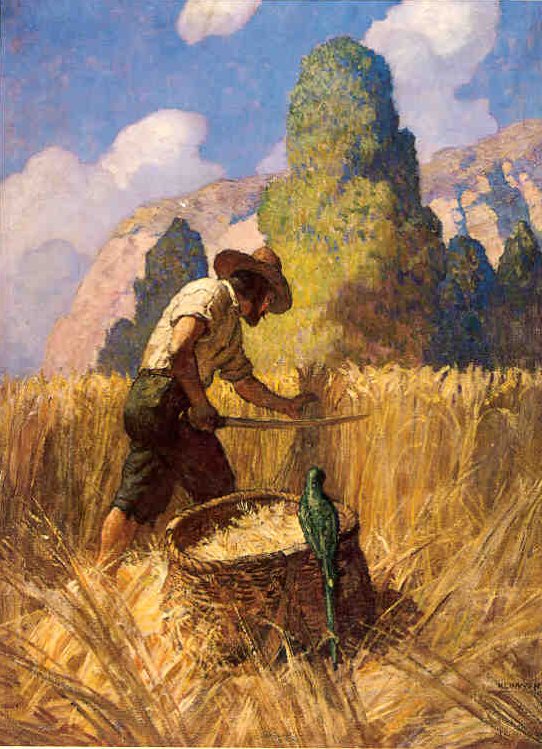 Defoe’s Crusoe is very practical. The beauty of the island has no appeal for him. He does not care for scenery. He regards the island as his personal property. He is proud of being the master of the island. Here I don’t agree with him because we are not the masters of nature but the part of it.

The novel “Robinson Crusoe” is the glorification of energy. This novel is not only a work of fiction, an account of   adventures, it is a study of a man, his relation to nature, civilization and labour.

1. When was “Robinson Crusoe” written?

2. Does Defoe show the development of his character?

3. What is Crusoe’s guiding principle?

4. What features of character saved Crusoe from despair?

5. This novel is a praise to human labour, isn’t it?