Kostenko is a leading representative of Ukrainian poets of the sixties known as the Sixtiers. This group started publishing during the 1950s and reached its apex during the early 1960s. It was during the 1950s when Kostenko published her first poems in major Ukrainian periodicals.

She is a Honored Professor of Kyiv Mohyla Academy, Honorary Doctor of Lviv and Chernivtsi Universities.

What is Lina Kostenko famous for? Can you name her contribution to Ukrainian literature?

Scan the text and find the information you did not know about Lina Kostenko.

Lina Kostenko was born 0n 19 March 1930 in a small picturesque town of Rzhyschiv, Kyiv region, into a family of teachers.Lina’s father underwent repression duing the period of Stalin ruling. He spent some severe yeas in the notorious camp “GULAG”.

When you read carefully the biographies of the modern Ukrainian poets you could find the similar pages in the stories of their families. These pages upbrought the spirit of the future citizens.

Since the age of six Lina Kostenko has lived in Kyiv. When a schoolgirl she attended a literary studio at the Union of Ukrainian writers. She already had something to tell to the world but was looking for a means of expression. Lina first studied at Kyiv Pedagogical Institute and later, in 1952-56, at Moscow Gorkyi Literary Institute receiving there the first-class-degree with distinction. While studying in Moscow she made friends with many famous poets.

Lina Kostenko was lucky to start her poetic career at the best time in the Soviet history. The short post-Stalin period can be rightly named the renaissance of the Ukrainian social and cultural life. Freedom of speech suddenly became a wonderful reality. Unfortunately, this period didn’t last long but it gave chances for many new names to appear. 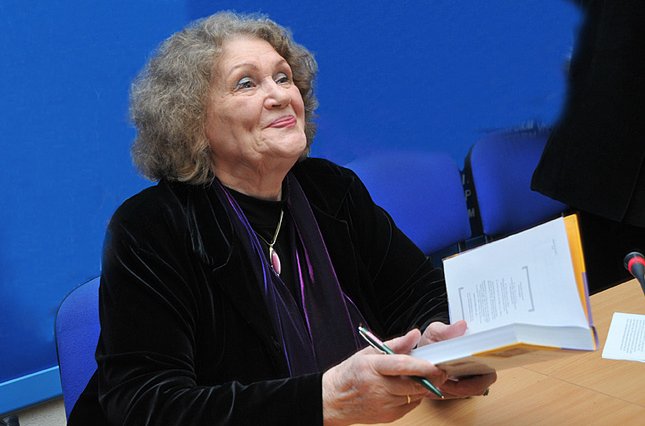 Lina published her first three books of poetry one after another which followed by 16-year-long silence. Lina couldn’t sing praises to the Soviet life and couldn’t stand her verses being corrected by the censorship. The Soviet literary authorities weren’t in their turn interested in her personal feelings and life vision.

Lina Kostenko was socially active. She wasn’t sent to the camps like her contemporaries to repeat the fortune of her father. But her silence was a vivid expression of her social position. Once she admitted that the next book of poetry was published in 1977 only after hunger strike she went on as social protest.

Lina Kostenko has written ten books of poetry. For the historical novel in verses “Marusia Churai” she was awarded the highest prize in Ukrainian literature – the Shevchenko State Prize.

A journalist is going to interview Lina Kostenko Ukrainian poetess. Choose the best questions to ask her.