Legends and Symbols of Ireland

Legends and Symbols of Ireland

Ireland is the third largest island in Europe, with a population of around 6.5 million! To the west of the island lies the Atlantic Ocean, to the south is the Celtic Sea and to the east is the Irish Sea.

The Irish flag consists of three vertical stripes in green, white and orange. Green represents the Gaelic, Catholic population of Ireland, with orange representing the Protestants under William of Orange, and white symbolising peace between the two groups.

Ireland is a wonderful country, and if you come to visit, you will meet many friendly people who love to sing songs and dance, and they will tell you lots of stories.

The Irish people are great story tellers. Medieval monks developed an oral tradition of telling tales and stories. For centuries story tellers travelled from place to place and were warmly met by people. They could easily find shelter and food as it was respectable for anyone to have a story teller in his house. Legends ans symbols of Ireland are very interesting.

The Legend about the Red Hand

The legend about the red hand which we can see on the Irish coat of arms, is said to have come in the following way. 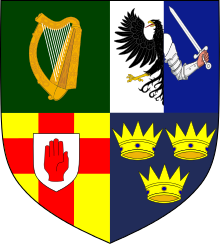 The Vikings from Scandinavia on their way to Greenland stopped over in Ireland to fill their boats with food and water. Once on returning home two Viking chiefs decided that one of them would become the king of Ireland. As Vikings didn’t fight among themselves, it was decided that the one who would first touch the Irish soil, would become king.

They set off in their big boats. The race between them was very even and each crew did everything to win. When they were quite close to the shore, Heremon O’Neil, that was the name of the Viking chief that became king, cut off his right hand and threw it on the land. It is due to this that the red hand had been a part of the coat of arms of Ireland ever since.

The people of Ireland mainly speak English, but around 25% of the population also speak Irish Gaelic. 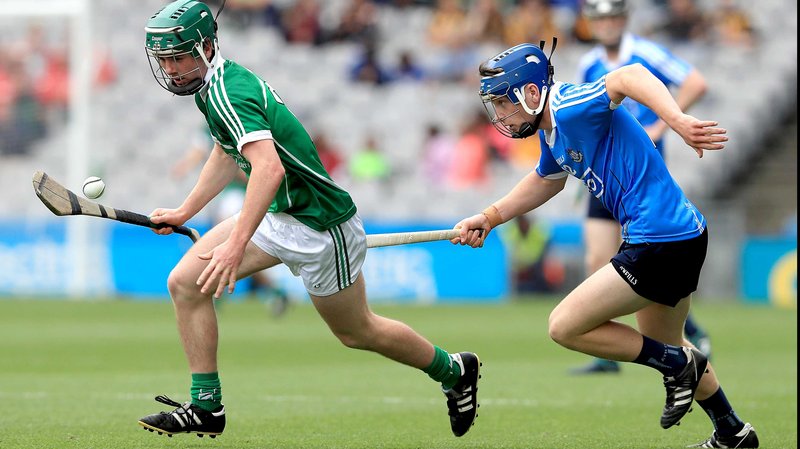 Popular symbols of Ireland include the harp, the Celtic cross and the shamrock. Saint Patrick, who is the country’s patron saint, introduced the Celtic cross to Ireland, and used the three-leaf shamrock to explain the Holy Trinity: the Father, the Son and the Holy Spirit – three parts of one body. 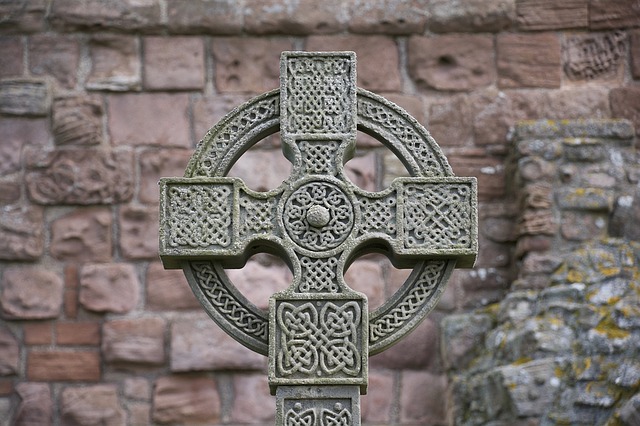 Numerous legends are connected with the name of St. Patrick who was known for his wonderful power. Perhaps the best known legend is that he cleared Ireland of snakes. The story goes that one old snake, the king of snakes, resisted him, so he made a box and invited the snake to enter it. The snake refused saying it was too small; but St. Patrick insisted it was quite large enough to be comfortable. At last the snake got into the box to prove that it was too small. At that moment St. Patrick shut the box and threw it into the sea. The other snakes jumped into the water after their king and drowned.

One fact remains true that there are no snakes in Ireland and probably there never were, but the legend lives in the folklore of the Irish. 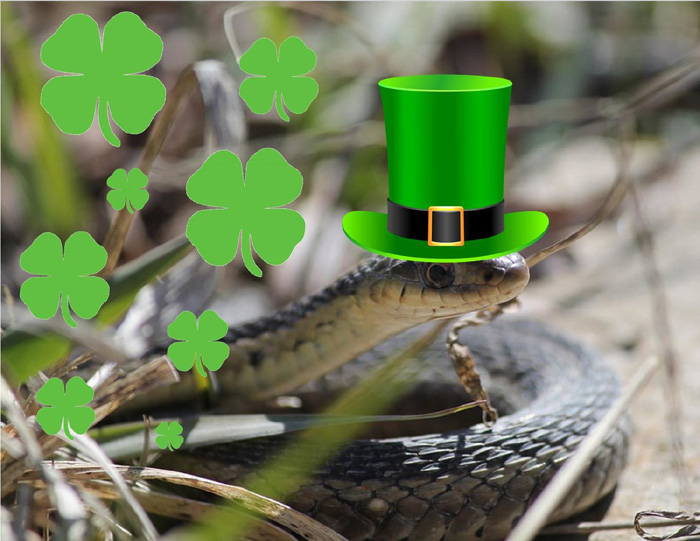 One more symbol of Ireland is the leprechaun, an elf who lives in the forest. According to myth, he hides his pot of gold, and will only give it to the person who catches him!

A popular piece of jewellery in Ireland is the claddagh ring, which comes with an interesting story! Claddagh is a small fishing village in Ireland, and the legend takes place there around 500 years ago. A family of fisherman were at sea when they were captured by pirates, who took them to Africa and kept them as slaves for goldsmiths. Some of the men died there, and some accepted their fate as slaves, but the youngest man was determined to return home to a girl he had fallen in love with. Every day, he stole a little piece of gold so that he could make a ring for his love, and eventually he escaped to Ireland with it.

The girl had waited for him, and he gave her his ring – the Claddagh ring. On the ring is a heart, which represents his love for her. The heart wears a crown, which symbolises his loyalty to her, and it is held by two hands which represent their friendship. 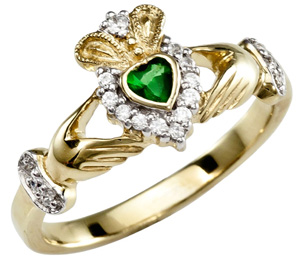 The ring is now very popular in Ireland for engagements and marriages, and it is often passed down through families. If the lady wears the ring with the heart pointing out, it means she is looking for her love, but if the heart points in, she has already found him! 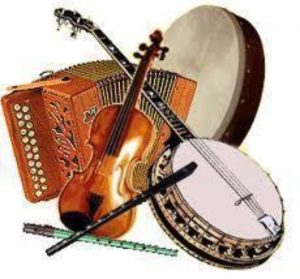 Ireland has one of the liveliest folk music traditions in Europe. All over the country people like to get together, usually in pubs, sing, play, or just listen to traditional music. Irish dance tunes (mainly jigs, reels and hornpipes) are fast and lively, while Irish songs are often slow and sad, reflecting Ireland’s unhappy history. Typical instruments are fiddle, tin whistle, banjo and bodhran, a kind of drum.

Traditional dancing, for which most of the music played in pubs was actually written, is becoming popular again, having survived mainly in the rural areas of the West of Ireland.