Food and Drink in Britain

Food and Drink in Britain

Let’s learn about food and drink in Britain

Although Britain is quite a small country, it offers a wide choice of food and drink. Food and drink in Britain is various. You can find  traditional food like roast beef or fish and chips as well as Italian, Mexican and West Indian food, and drink beers and wines from many different countries.

Where do people eat their food when they are at home? Breakfast is usually a quick meal, eaten in the kitchen. Lunch is often eaten at school or at work. Dinner may be eaten in the kitchen, the dining-room, or the living-room – often in front of the television.

Breakfast is usually the packeted ‘cereal’ (e.g. cornflakes) and/or toast with butter and marmalade. Some people like ‘to go to work on an egg’ – they eat an egg for breakfast before going to work. Eggs are a basic part of most people’s diet. They are either fried, soft-boiled and eaten out of an ‘egg-cup’ or hard-boiled. Whatever they eat, most people drink tea or coffee. At weekends many people have a more traditional, cooked breakfast.

At around 11 o’clock many people have ‘elevenses’ – a cup of tea or coffee and some biscuits. In fact, people drink tea or coffee whenever they feel like it.

Lunch is usually at 1 o’clock., but it is often a bit earlier for schoolchildren and those who start work at 8 o’clock. In the middle of the day, people just want to eat up quickly and are not interested much in quality (the lunch break is an hour at most). Most people today have a small mid-day meal – usually sandwiches, and perhaps some crisps and some fruit.  Sandwiches make a quick lunch, and are easy to take to work or school. School, colleges, companies, etc. usually have a self-service restaurant called a cafeteria where you buy your own food and take it back to your table.

At around 4 o’clock it is usually to have a cup of tea and a snack.

The evening meal is usually called ‘tea’ or ‘dinner’. A traditional British dinner is meat and two vegetables. The most popular meats are chicken, beef, pork and lamb. Vegetables grown in Britain, like potatoes, carrots, peas, cabbage and onions, are very popular, but today you can buy vegetables from many countries all through the year. It is common in many households to finish a meal with a sweet dish (often called ‘dessert’ or ‘sweet’) – something like fruit, pudding, chocolate cake, or apple pie. The British are the world’s biggest consumers of sugar. It is present in almost every tinned food item and they also like ‘sweets’ (which means both all kinds of chocolate and also what the Americans call ‘candy’).

‘Supper’ is the usual word for the evening meal among most people who do not call it ‘tea’. 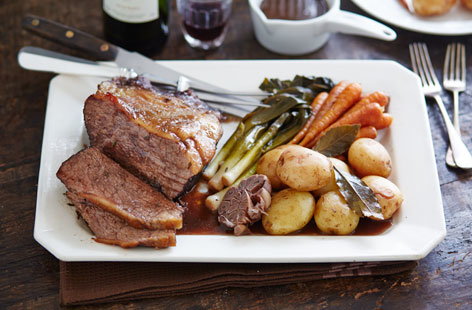 Sunday is a day when many families like to enjoy a big meal together. They usually have a big piece of meat which is roasted (cooked in the oven for about two hours) with potatoes. Beef is eaten with hot white horseradish sauce, pork with sweet apple sauce, and lamb with green mint sauce – perhaps made with mint grown in the garden.

Many people do not have time to cook traditional food, so they can buy food which is ready to eat or quick to make, but visitors to Britain often want to try ‘typical’ British food. The best place to go is usually a pub and many pubs have a notice outside saying: ‘home cooked food’. One of the best-known pub meals is the ploughman’s lunch – bread, cheese, tomatoes and some salad. 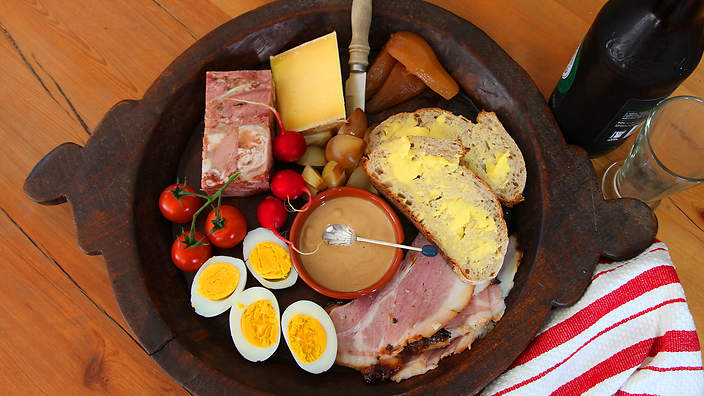 Going to a restaurant for a meal, instead of eating at home, is called ‘eating out’. Apart from pubs, there are two types of eating places which are used for more everyday purposes. One is used during the day, most typically by manual workers, and is therefore sometimes described as a ‘workman’s café’ (pronounced ‘caff’). But it is also used by anybody else who wants a filling meal and likes the informal atmosphere. It offers mostly fried food of the ‘English breakfast type’. The most common items are eggs, bacon, sausages, tomatoes, mushrooms, and bread. It is not always accompanied by ‘chips’ (the normal British word for French fried potatoes). The British eat rather a lot of fried food. A ‘fry-up’ is a phrase used informally for several items fried together. The other type is the fish-and-chip shop, used in the evening for ‘take-away’ meals. 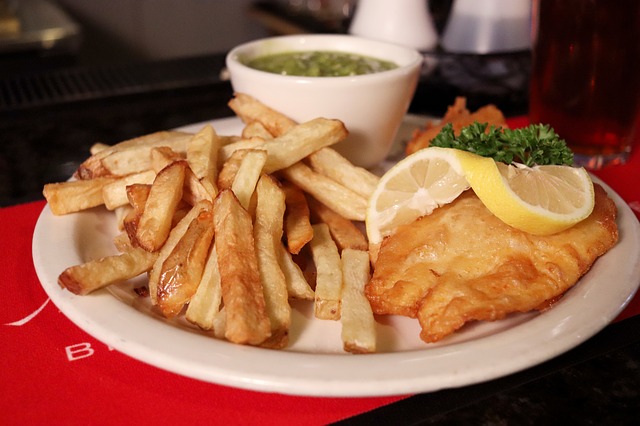 An evening meal in a restaurant usually has three courses. The first course is quite a small one called a starter. It may be something like a soup or salad or some sea food. Next comes the main course, which is the biggest of the three. This is usually meat or fish with vegetables, or vegetarian food. If the main meal comes with potatoes you can choose which kind you would like. With beef, and sometimes fish, you are asked how you would like it cooked: well-done, medium or rare.

The last course is either sweet – a dessert or a cheese plate, which is pieces of different cheeses with biscuits and grapes. The meal usually finishes with tea or coffee and perhaps a chocolate.

You can’t miss the best food and drink in Britain, try when you are in the United Kingdom.