Princess Olha of Kyiv was the only woman among rulers of Kyivan Rus. Her life made one on the brightest pages of our history. She was a beautiful woman, a loving wife, a caring mother and an outstanding ruler. After the death of her husband, Prince Ihor, she ruled the country very successfully for almost 20 years and was named the wisest among the women of her time.

There had been Christians in Kyivan Rus since Apostle Andrew. They were mainly ordinary people. As for the nobility, the first known Christians became Princes Ascold and Dir. Yet their faith was their personal not state affair. Olha could observe the pure life of Chrsitians which differed so much from that of rude pagans.

Olha’s husband, Prince Ihor, was a courageous warrior. He was killed by the tribe of Drevlians, while gathering toll from them. It was at that time when Olha proved herself to be a ruler. She took revenge of her husband’s death having burnt the main town of the enemies, Iskorosten, which she joined to her kingdom.

In 945 she was baptized. According to the ancient manuscripts she was baptized in her own country yet ancient Greek sources name the town of Tsarhorod (modern Istanbul). But there exists a nice legend about that episode of her life. This legend is a good demonstration of Olha’s wisdom and finess.

The legend tells that once she set her way to the most important neighbour country of the time, Byzantine. When the emperor of the country saw her prominent beauty he immediately fell in love with her. He made up his mind to marry the princess. Olha had no desire to make her kingdom dependent on Byzantine. So she tried to avoid the marriage. She told the emperor that to become an empress she, a pagan, had to be baptised and invited the emperor to be her god father. He agreed.

When in some time, after long preparation and Olha’s studying of the Bible she became a Christian, the emperor made another try. But that time it was already too late. Olha didn’t refuse him but just said that he, her godfather, couldn’t be her husband as well. It was a trap and the unfortunate emperor was left to only admire Olha’s uncomparable beauty and wisdom. 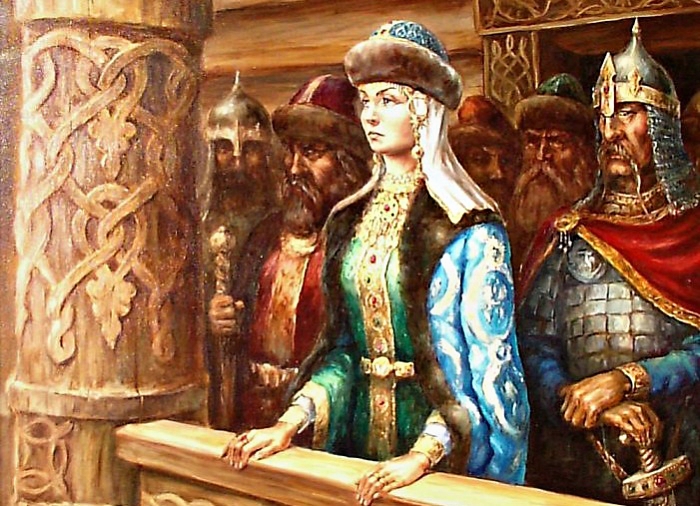 Olha did much as a Christian to her country. She built churches, invited bishops from other Christian countries and tried to rule with peace. Her only son yet didn’t become a Christian though he had been taught by his mother. He, as his father, was a warrior. Every time he replied to Olha with words: “My army won’t understand me and will never accept rules of Christian life”. But spending all his life in glorious battles he still was very tolerant with Christians. Olha was very successful with her grandson, Prince Volodymyr, who would later convert the entire nation to Christianity.

Olha died in 969 at the age of 75 and was buried according to the Christian ceremony in a church. Later Prince Volodymyr reburied her body in the so called Desiatynna Church, the first stone church in Kyivan Rus. A monk left an evidence that there was a small window in Olha’s coffin so that people could see her immortal remains.

The church was destroyed by Mongolo-Tatars and much later Petro Mohyla again reburied Olha in a reconstructed church. The sacred remains of Olha’s body were reburied for the third time by one of the Russian Tsars – this time in an unknown place.

The cult of Saint Olha existed already before Mongolo-Tatars and she became recognised a saint in the 12th century.

The commemoration of Olha’s death on 11 July goes from the 15th century. She is called “Dawn Before Sunrise”. “The Bright Sun” was her grandson, Prince Volodymyr. 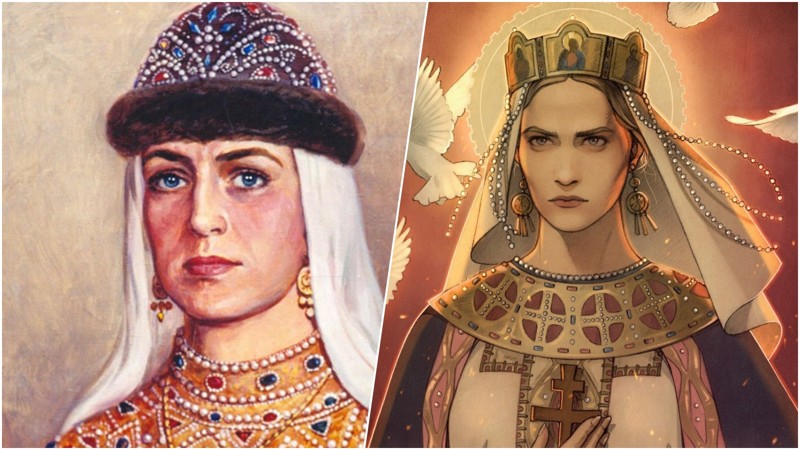 Mark the statements as true or false.

Speak about changes happened during Olha’s times. These questions will help you.