A Good play for your English drama club to prepare a performance for Valentine’s Day.

English performances are beneficial for students in many ways:

Story-teller: Once upon a time, in a far country, there lived a king whose daughter was the prettiest princess in the world. Her eyes were like water in a deep lake, her hair was softer than silk, and her skin was whiter than snow. Since childhood the princess was surrounded only by the things of beauty. She walked in silver slippers. She slept in an ivory bed. All her toys, even dolls, were made of gold, platinum, or precious stones. Cheaper materials were considered improper for the daughter of the king. In other words, not only was she pretty, but she was also very rich.

One day the king decided to give his daughter’s hand in marriage to one of the princes of the four neighboring kingdoms. Let’s call them Spades, Clubs, Diamonds and Hearts. He sent a message there. The messages said: “My daughter will marry the prince who brings the gift she likes the most.” Now the king, the princess and her cousin are waiting for the princes to come. Let’s join then and watch the ceremony. 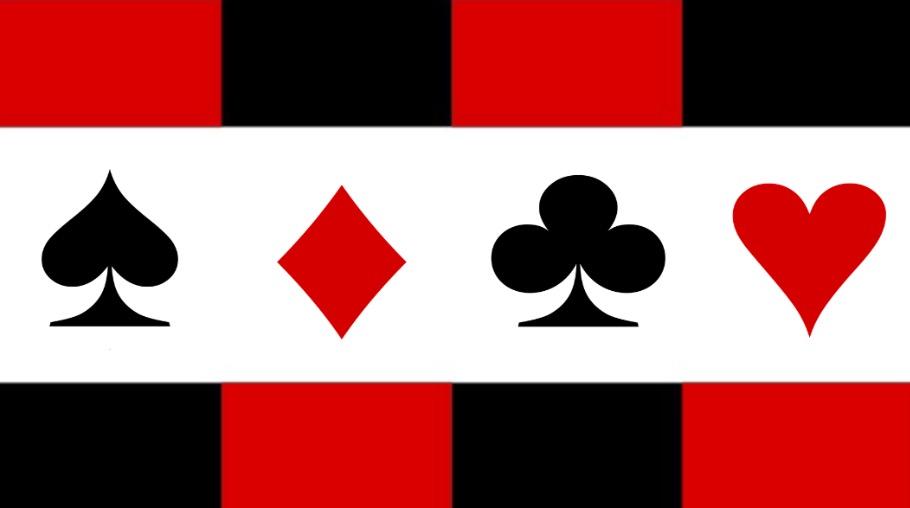 Setting: A big room in the king’s palace. King, Princess and Cousin are sitting at one end of a long table.

Princess (to Cousin): What do you think of it, dear?

Cousin: I think that a gift is not everything. If you want to choose a good man, watch his manners and how he expresses his feelings.

Princess: Oh, you are wise.

Herald: The Prince of Spades. 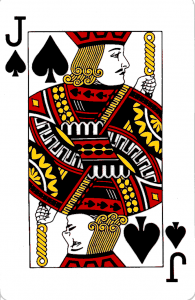 Enters the Prince of Spades, a man of solidity bearing a sword and a massive alarm clock under his arm. He bows, comes up to the table and stands at attention.

Prince of Spades: Oh, most beautiful princess! I have won many battles and I have come to fight for you. Let me offer you my arm, my sword and this alarm-clock as gift of my love. When you are in danger press this button, and my soldiers will come to help you. (He clicks his heels, salutes with his sword and leaves.)

Princess: Oh, father, I’m afraid of this man. He spoke of battles and fighting!

King: Come, child, there is no danger. The prince is a brave man, the commander of a big army. You’ll be very safe with him.

Cousin (with a shrug): It’s funny. You won’t use it because it is made of plastic and metal.

Herald: The Prince of Clubs 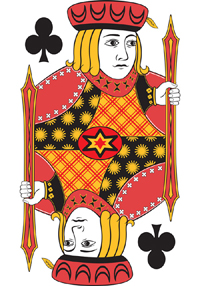 Enters the Prince of Clubs, an absent-minded looking man wearing spectacles, dressed a bit out of date, with a thick old book. He bows clumsily, puts his book on e table, fumbles in his pockets, produces a scroll of paper and begins to read.

Prince of Clubs: My dearest and beloved lady! I can address you only in verse!

Take all my love, my love, yea, take them all;

What hast thou then more then thou hadst before?

No love, my love, that thou mayst true love call;

All mine was thine before thou hadst this more.

And here is the Book of Wisdom, my humble present.

Princess: What a strange man! He is so polite. I like his poem. He must be a great poet.

Cousin: Not he! Shakespeare is!

King: Yes, the prince is a very learned man. With him you’ll know everything.

Princess: Is it necessary for a wife to know everything?

Herald: The Prince of Diamonds. 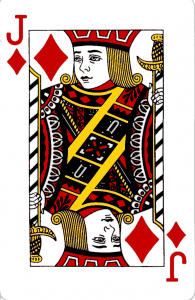 Enters the Prince of Diamonds, an elegant man, well dressed, very businesslike and self-assured with a huge golden box in his hands. He comes straight to the table and nods slightly.

Prince of Diamonds: How do you do, ladies and gentlemen. I have come to tell you Sire (to King), that I agree to marry your charming daughter. (To Princess) Here is my gift. It’s very useful. Pure gold. Made in my kingdom. High quality. No doubt, you’ll like it. As for the details, we’ll discuss financial questions with your father. See you soon. (Bows to King, blows a kiss to Princess and leaves).

Cousin: No, I mean the manners. Of course, you cannot expect much here. He is too rich.

King: Right. The richest in the world. With him you’ll have anything you like.

Princess: Do you really think so, father?

Herald: The Prince of Hearts. 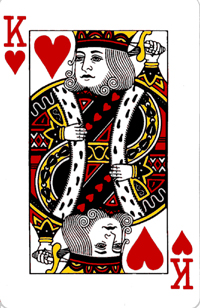 Enters the Prince of Hearts, a man poorly dressed, a guitar on his back and a bunch of field flowers in his hand. He puts the flowers on the table, bows low and falls on one knee.

Prince of Hearts: Oh, heavenly lady! The Princess of my dreams!

The skies so blue may soon turn grey,

And love of mine will never fade.

For rose in bloom decay next day.

But you will shine my prettiest maid.

Princess: What lovely flowers? I have never seen anything like them.

King: Of course not, because they grow only in the fields. Poor boy! Once his father was rich and there were gold mines in his lands. Now there are only flowers there. Such a pity. No precious stones, no gold.

Cousin: But he has got a heart of gold!

Princess: And what shall I do with this gift? Gold lasts forever.

Cousin: His love does. And his gift shows his feelings. Take it as a sign of his love.

Princess: Do you think it’s enough?

King: Herald, tell the princes to wait for my daughter’s decision.

Princess: First, I‘d like to hear what you think.

Cousin: I think the prince of Hearts is the best choice. He is gentle, handsome. His manners are noble. Life in his beautiful kingdom could be very romantic. If I were you …

Princess (interrupting her): Fortunately you are not. I don’t want always to diet. I am not so silly to live in poverty. I have chosen this. (She stands up and takes the golden box from the table). It is the most useful present and I like it the best.

Story-teller: If you think that was a happy end, you make a mistake. The king’s daughter married the Prince of Diamonds but her husband turned out to be a gambler. By and by he lost all their money, his kingdom was ruined and they ended their days in poverty.

The Cousin married the Prince of Hearts and went to live with him. And it so happened that soon much gold was found in the mines in his kingdom. The Prince of hearts built a comfortable palace where they lived happily ever after. And here ends the story of the princess and four gifts. 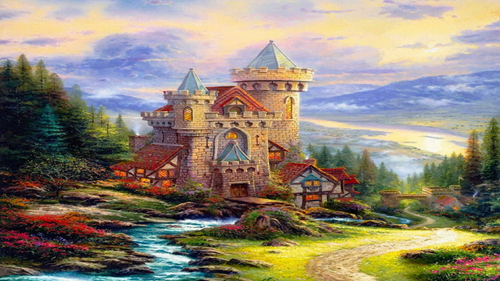 Leave your comment if you liked English Peformance: The Princess and the Four Gifts