American Cherokee Legend of the Strawberry

American Cherokee Legend of the Strawberry

It’s a good Valentine story for reading and discussion

First man and First Woman had an argument.

First Man said to First Woman, “Why are you so lazy? I told you to have my meal ready hours ago.” First Woman said, “If you would have gathered fire wood, it would be ready.” First Man yelled, “That is women’s work!” 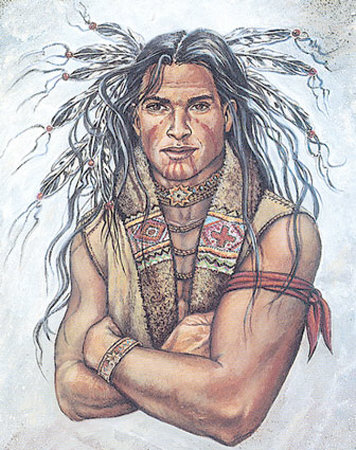 Then First Woman began to cry. This made First Man even more angry. “Why don’t you just leave if all you can do is cry?” he said. So she did.

First Woman ran deep into the forest. The sun began to sink behind the mountain. First Man had calmed down by now. When she did not come back, he walked to the edge of the clearing. Again he called her name. Still she did not come. He began to call her name louder and louder. There was no response.

The sky grew dark and the forest was darker. First Man returned to the lodge, thinking maybe she had slipped in while he was away. First Woman was not to be found.

“I will go look for her at daybreak,” he thought as he lay down to sleep. But sleep did not come. All night long he tossed and turned thinking about the danger First Woman might encounter. He prayed for her safety.

Early the next morning, before the sun rose over the trees, First Man prayed as he entered the forest. “Creator,” I am so sorry for the things I said to First Woman. Please cause a patch of flowers to spring up in her path. She will surely stop to smell them and I will be able to catch up to her and tell her how sorry I am.” So the Creator placed a patch of beautiful flowers in her path. But she did not stop to smell them. In her anger, she kept walking fast. 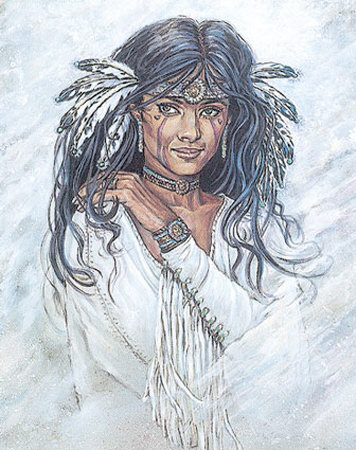 First Man was fast on her tracks. He found the place where she had rested for the night. Shortly afterwards, he found the patch of beautiful flowers Creator had placed for her. He looked all around, but she was not to be found.

Again, he prayed, “Creator, she must be hungry by now. Please cause a patch of berries to spring up in her path, so when she stops to eat, I can catch up to her.” Creator placed a patch of Blackberries in First Woman’s path. The berries were tempting, but the briars tore at her soft skin. She ran on.

Soon First Man came across the Blackberry Patch. Seeing she was not there, he prayed once more “Creator, I am such a fool. You know far better than I what would please First Woman. Would you choose something to put in her path to slow her down, so I can tell her how much I love her?”

Creator reached down to the beautiful flower patch and picked the most delicate white flower. He then reached over and picked some berries and pricked his finger on the thorns. Drops of blood turned the berries large, bright red and heart-shaped. He placed the white flowers and the red berries in the path of First Woman.

Just as she had finished praying, her husband appeared from behind a tree. They held each other, exchanged loving words and forgave each other.

This is why the Cherokee always have fresh whole strawberries, jam and pictures in their home. It is a reminder not to argue with one another. Their heart-shape reminds us if we do slip and say something hurtful, to pray, ask for forgiveness and say loving words, just as First Man and First Woman did.