Two thousand years ago, the Ancient Greeks listed the “Seven Wonders of the World”. They described the biggest and most impressive structures around the Mediterranean Sea at the time. The Great Pyramid of Giza is one of them and the only one that has survived. Today people are as fascinated by the Great Pyramid as they were 4,000 years ago.

Interesting Facts about the Great Pyramid of Giza

The Great Pyramid of Giza is over 4,000 years old. The Great Pyramid was built as a tomb for the pharaoh Khufu. The pyramid once held all the treasures that Khufu would take with him to the afterlife. He wanted a big, impressive tomb for himself. And it is really huge! For many centuries it was the tallest building in earth.

The Great Pyramid of Giza is part of a larger complex called the Giza Necropolis. There are two other major pyramids in the complex including the Pyramid of Khafre and the Pyramid of Menkaure. It also includes the Great Sphinx and several cemeteries.

The Great Pyramid has four sides that face the four directions of the compass – north, south, east and west. It is 136 metres high.

The Great Pyramid of Giza was built from more than 2 million stone blocks, each weighing from 3 to 30 tons. In fact, the largest ones could weigh 50 tons! The base of the Great Pyramid covers an area of 55,000 m2, and each side measures about 20,250 m2.

Nobody is sure how people carried such heavy blocks and put them in place; perhaps they used ramps. It probably took twenty years to build the pyramid. 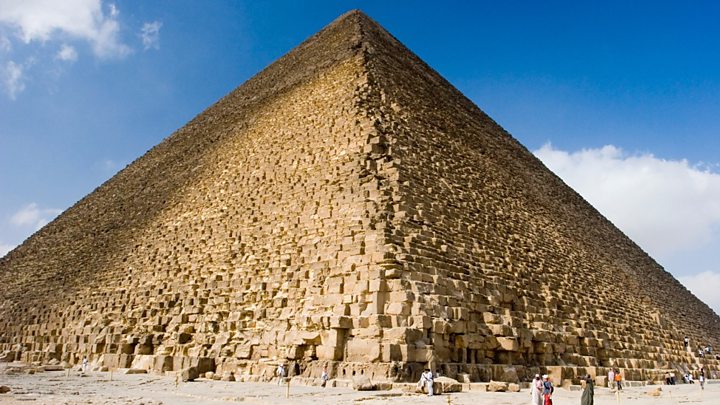 It is interesting that the Egyptians used a special dolomite material on the inner surface of the pyramid. This mineral is known for its property of increasing electrical conductivity.

Modern technologies still can not recreate the gypsum mortar, which was used in the construction of the pyramids. This type of gypsum withstands tremendous pressure. So it sounds crazy, but the fastening solution is stronger than the blocks themselves, of which the pyramid is built.

In 1993, an inaccessible secret room was discovered under the Great Pyramid. This room, which seemed deliberately hidden, was called the Queen’s Chamber. In 2011, thanks to new technologies, it became possible to explore the room with the help of a remote camera.

At the top of the Great Pyramid of Giza there used to be pommel, completely made of gold. It could serve to transfer negative ions (these are atoms with an electric charge) to the ionosphere (a layer of the earth’s atmosphere containing tons of such atoms). So produced an electric current of great power!

Another oddity that can be seen in such engravings is a thing that clearly looks like a wireless antenna. Maybe the ancient Egyptians used wireless energy to communicate? And they could use electricity in weaving mills to make yarn.

Scientists have discovered the famous pyramid concentrates electric and magnetic energy into its internal chambers and below its base, creating pockets of higher energy.

As legend says that there was no mummy in The Great Pyramid of Giza.