Read about Cupid, one of the most famous symbols of Valentine’s Day

Why is Cupid the Symbol of Valentine’s Day?

Cupid, who is also known as Eros, is the Roman god of beauty and love. He is also believed to be the son of goddess Venus. He looks more like a baby with a rosy pink face, chubby body, and wings. He holds a bow and a quiver filled with golden and leaden arrows.

Here is a story the Romans told about him.

The Story of Cupid

Cupid was the son of a beautiful goddess, Venus. Wherever Venus went Cupid went too. He was a gay little god and he liked to see people happy. He went around shooting arrows into the hearts of humans. And people fell in love.

Venus, his mother, had a golden mirror. She looked into it every day. She saw the most beautiful face in the world. One day Cupid found his mother crying. “I have lost my golden mirror,” she said.

Cupid went in search of the mirror. He looked here and he looked there but he couldn’t find it. Then he flew over the meadow where there were some sheep. Among the sheep stood a shepherd. Cupid looked down and saw the light that came from something in the shepherd’s hand. Cupid flew low and saw rough, bearded face of the shepherd. He also saw what shepherd held in his hand. It was Venus’ golden mirror. The little god was angry that shepherd had dared to look at his ugly face in the mirror of his beautiful mother.

He struck the mirror from the shepherd’s hand. It fell to the ground and broke into hundreds of pieces. Plants with beautiful blossoms sprang up where the mirror had broken. Later the people called flowers “Venus’ Looking-Glass”. 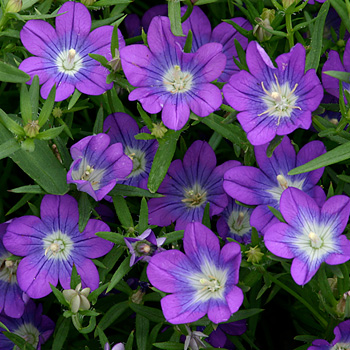