Eton, the Most Famous Public School in the World

Eton College, or just Eton, is a British independent school for boys founded by King Henry VI in 1440 as a charity school to provide free education to 70 poor boys who would then go on to King’s College, Cambridge, founded by the same King in 1441. The original buildings consist of two quadrangles containing the chappel, the upper and lower schools, appartments for officials, the library, and offices.

Eton College is in Eton, near Windsor in the English county of Berkshire. It is north of Windsor Castle. The school is one of the original nine English “public schools” as defined by the Public Schools Act 1868. The school is a member of the Eton Group of independent schools in the United Kingom.

Eton is a full boarding school. All pupils live at the school. It is one of four such remaining single-sex boys’ public schools (the others being Winchester College, Harrow College and Radley College). It educates more than 1,300 pupils, aged 13 to 18 years. For every 8 pupils there is one teacher.

Eton has educated generations of British and foreign aristocracy and members of the Royal family. The list of graduates includes nineteen former British Prime Ministers. Eton has been described as the most famous public school in the world and has been referred to as “the chief nurse of England’s statesmen”. 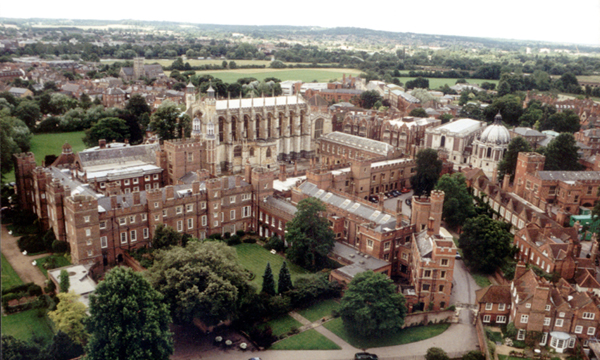 About 20% of pupils at Eton receive financial support, through a range of bursaries and scholarships. Students at Eton College are drawn from a variety of nationalities and backgrounds. One in ten students come from overseas. Special learning support is offered to students whose first language is not English.

Eton continues to have a strict dress code. One of the most interesting aspects of Eton is the school uniform: tailcoats, stiff collars and the famous Eton tie. The cost of the basic uniform runs to about £1,000. 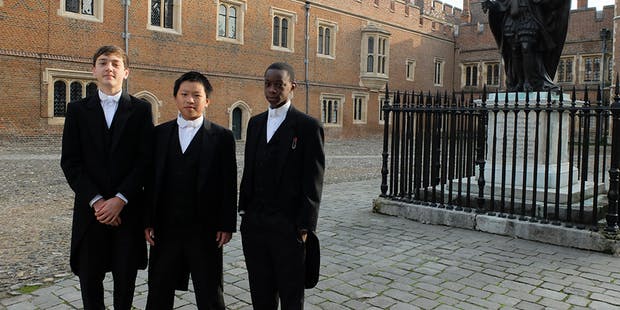 There are three academic terms (known as halves) in the year. They are called halves because the school year was once split into two halves, between which the boys went home.

Sports provision is diverse, but focused on football, rugby and rowing.