The English writer A.A. Milne is best known for his children’s stories about the adventures of Winnie-the-Pooh.

Alan Alexander Milne was born in London in 1882. At the age of 11 he won a scholarship to the Westminster School. Then he went to Cambridge University and became an editor of the university paper.

By 1906 he had worked as an editor at Punch, a classics British humour magazine.

When World War I started , he joined the army and served in France. Here he wrote his first play, which was produced in London in 1917.

By 1919 Milne completed one book and several plays. Some of his plays were staged in London and one of them even in New York City. Milne became well-known as a popular London playwright. In 1920 his son Christopher Robin Milne was born. It was the event that changed the history of children’s literature. In 1923 Milne began to work on a collection of poems for children. The result was When We Were Very Young, published in 1924.

In 1926 he added to his success with the publication of Winnie-the-Pooh. Milne was always saying that it was his wife and his young son, who inspired him to write the poems and stories for children.

Milne’s greatest success were his books Winnie-the-Pooh (1926) and The House at Pooh Corner (1928). These two volumes told the adventures of a young boy named Christopher Robin, after Milne’s own son (Christopher Robin Milne), and his animal playmates, who were inspired by the real Christopher Robin’s stuffed toys. A bear named Winnie-the-Pooh was the central character, accompanied by fussy Rabbit, gloomy donkey Eeyore, bouncy tiger Tigger, kind kangaroo Kanga and her baby Roo, wise Owl and shy Piglet. 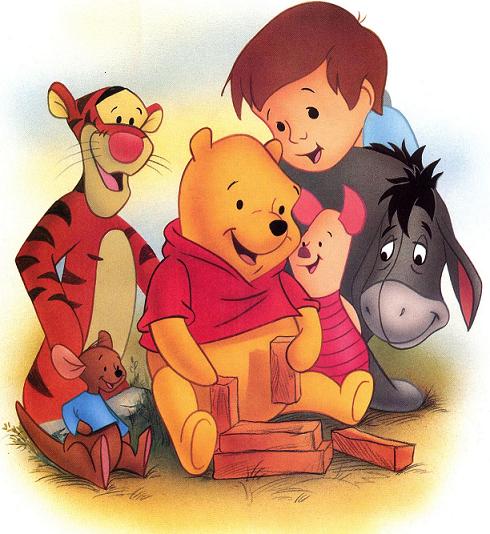 The adventures of Pooh and his friends in the Hundred Acre Wood were all best-sellers and made Milne a household name.

Sometimes it seemed to Milne that he should write something more important, like a detective story. In fact, in 1922 he wrote a detective novel, The Red House Mystery, as well as many novels, essays, short stories and poems. He wrote over 25 plays and his autobiography It’s Too Late Now, published in 1939.

When he died, 30 years later, there was already no doubt that Alan Milne achieved the world-wide popularity not as he wished due to his plays and novels, but to the adventures of Winnie-the-Pooh Bear. The Pooh books are favourites with old and young alike and have been translated into many languages.