The Canterbury Tales: Three Young Men, Death and a Bag of Gold

The Canterbury Tales: Three Young Men, Death and a Bag of Gold

It was a long time ago in the 14th century.

One fine April evening some people met at an inn in London. These people wanted to go to the town of Canterbury. It was a long journey. To make it shorter and more interesting they thought of telling stories on their way. Each of them had to tell two stories on the way to Canterbury and two on the way back.

Such is the contents of the book written in the 14th century by the greatest writer of that time Geoffrey Chaucer (1340 – 1400). The book is called The Canterbury Tales. It was written more than 600 years ago, but it is still read today. The Canterbury Tales are translated into many languages, and people in many countries know the book and its author.

THREE YOUNG MEN, DEATH AND A BAG OF GOLD

Three young men were sitting in an inn. They were drinking wine and making merry. Suddenly they heard a noise outside. They looked out of the window and saw some people carrying a coffin.

The innkeeper told them the name of the dead man. It was the name of their friend, also a young man. The three young men were very much surprised. They couldn’t believe their ears. But the innkeeper said, “Yes, it’s sure. Your friend is dead. Death takes young and old. He takes many people. There is a village not far from here. Every day Death kills somebody in that village. Nearly all the people there are dead. Death lives in that village, I think.”

Our three young men were drinking wine, so they did not understand quite clearly what the innkeeper said. They thought that Death really lived not far from the place, and they were very angry with death for killing their friend. They said, “Let’s go and kill Death! Let’s do it before night comes”.

“Be careful,” said the innkeeper, “if you meet Death, he will kill you, too.”

“We are not afraid,” answered the young men. “We shall go and look for Death. And we shall be brothers, and we shall defend each other. And when we find Death, we shall kill him.”

With these words they left the inn and went along the road. Soon they met a very old man.  They asked him, “Do you know where we can find Death?”

“Oh, yes,” replied the old man, “it’s not difficult to find Death. Do you see that wood? Go there and you will find him under an old oak.” 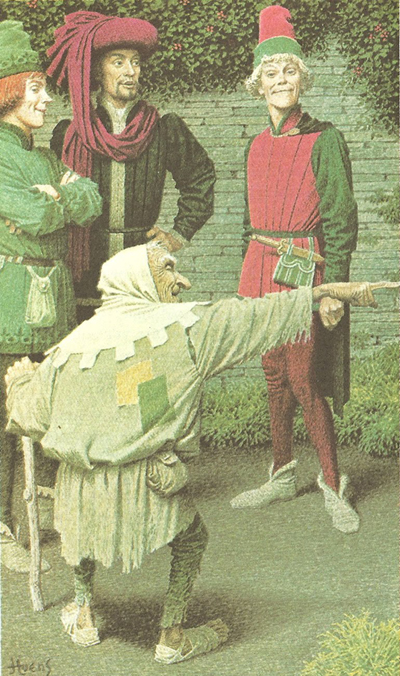 The young men thanked the old man and went into the wood. Soon they saw a very large old oak. When they came up to the oak, they saw a bag full of gold money under it. They were so glad that they forgot all about Death. They thought only about the gold.

“Fine!” said one of them. “Now we shall be very rich. Let’s take this gold to the house of one of us and divide it into three parts. Let’s go! Quick!”

“Wait,” said another. “Listen to me. We cannot carry all this gold money now, in the daytime. We shall meet people on the way, and they will ask us questions. They will say, “What are you carrying? Whose gold is it? Where did you get so much gold?” And if we say that we found the money in this wood, they won’t believe us. No, my friends, we cannot go now. We must stay here till night. At night, when it is dark and people are asleep, we can take the gold home and divide it.”

“You are right,” said the third. “We must stay here till night. Only it’s a long time to wait, and soon we shall be hungry. Let one of us go to town and buy some wine and something to eat.”

So the youngest of them went to town, and the other two remained under the oak with the gold money.

Now you will see what kind of friends these young men were. When the two of them who stayed there under the oak were sitting and waiting for the third, one of them said, “Look here. I don’t want to divide this gold into three parts, do you? Can’t we divide it into two parts, between you and me?”

“Oh, it’s very simple, you fool! Two are stronger than one. When he comes back, we can easily kill him, that’s all, and all the gold will be ours!”

The two young men liked the plan very much and they began to wait for their friend.

And what was their friend thinking about at that time? About the gold, of course. He was thinking how good it was to have so much money. “But,” he was saying to himself, “if we divide it into three parts, there won’t be so much! I wish I could have all of it for myself!”

He thought and thought, and at last he had an idea. “I shall poison them,” he said.

He knew a man in the town who sold poison to kill rats. He went to that man and bought some poison from him. Then he went and bought some bread and meat, and three bottles of wine.

When the young man left the town, he stopped at a place where nobody could see him, put the poison into two of the bottles of wine, and hurried to the old oak to join his friends. He wanted very much to have all the money for himself. 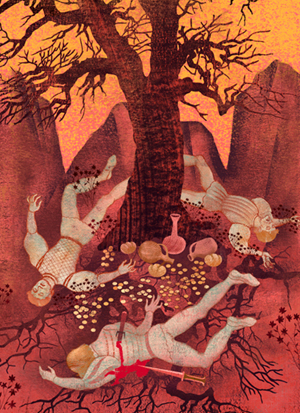 When he reached the oak, the other two were waiting for him with their knives ready, and they killed him at once. They were very glad: the gold was all theirs. They opened the bottles and drank all the wine. Soon they were dead, too.

This is how the three young men found Death.