Jane Austen is most famous for the books Sense and Sensibility and Pride and Prejudice.

Jane Austen (1775–1817) is one of the most recognised names in English literature. Her six major novels – Pride and Prejudice; Sense and Sensibility; Persuasion; Mansfield Park; Northanger Abbey and Emma – are considered classics today, renowned for their portrayal of English middle-class life in the early 19th century. Four of her novels were published before her death.

Austen was the seventh child of George Austen and Cassandra Leigh Austen. She was born in Steventon, a village in southern England in 1775.

Her mother, Cassandra Leigh Austen, was from a higher social rank than her husband and gave Jane Austen the sense of social class that underlies many of her novels. She did not seem to regret the fall in social standing, however, and was a cheerful wife and mother to the family.

Jane Austen was the first writer to use the phrase “dinner party”.

According to her niece, Jane Austen always wore a cap.

Austen honed her comic abilities by writing for her family, in particular her older, Oxford-educated brothers, whom she admired intensely. Though the entire family was literary, only Austen would become a published novelist.

The disease that Jane Austen died of at the age of 41 was never diagnosed in her lifetime. It is thought to have been Addison’s Disease, a tubercular disease of the kidneys. 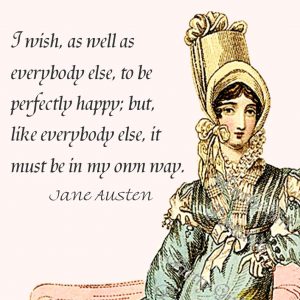 By the age of sixteen, Jane Austen was writing stories, poems and plays. She finished her first novel in 1795 and her second novel a year later. However, her father couldn’t find a publisher. Her life changed in 1811 when she found publisher for her first book. She published the book anonymously under the name, ‘A Lady’.

In total she wrote six novels. She is most famous for the books Sense and Sensibility and Pride and Prejudice. Her novels were funnier and more realistic than other of the time.

Now, students at school and university study her novels and there are about fifty different film and TV versions of her stories. There are also two Jane Austen museums in England.