Geoffrey Chaucer and “The Canterbury Tales”

Geoffrey Chaucer and “The Canterbury Tales”

Geoffrey Chaucer (1340 – 1400) was the greatest English writer of the 14th century. He was born in London, in the family of a wine merchant. His father had connections with the court and hoped for a courtier’s career for his son, and at 17 Geoffrey became page to a lady at the court of Edward III. At twenty, Geoffrey was in France, serving as a squire. During 1373 and the next few years, Chaucer travelled much and lived a busy life. He went to France on a mission connected with a peace-treaty. He made three journeys to Italy, which made a deep impression upon him. Italian literature opened to Chaucer a new world of art.

Chaucer’s earliest poems were written in imitation of the French romances. The second period of Chaucer’s literary work was that of the Italian influence. To this period belong the following poems: “The House of Fame”, a didactic poem; “The Parliament of Fouls” (birds), an allegorical poem, satirizing Parliament; “The Legend of Good Women”, a dream-poem and others. Chaucer was well-read in ancient literature. Italian literature of the time taught him the importance of national literature in the life of a nation.

When Chaucer came back to England, he received the post of Controller of the Customs in the port of London. Chaucer held this position ten years. He devoted his free time to hard study and writing.

Later Chaucer was appointed “Knight for the Shire of Kent”, which meant that he sat in parliament as a representative for Kent. He often had to go on business to Kent and there he observed the pilgrimages to Canterbury. However, these duties grew very tiresome to the poet, he longed for leisure to write. He petitioned to king several times for permission to give up his post, and finally the king granted him a pension so that he could enjoy the leisure he so desired. Later Chaucer lost his offices and all his pension. He became so poor that he had to borrow money for food.

The third period of Chaucer’s creative work begins in the year 1384, when he started writing his masterpiece, “The Canterbury Tales”. In 1399 his old pension was given back to him and a new one granted.

Chaucer died in 1400 and was buried in Westminster Abbey. Chaucer was the last English writer of the Middle Ages and the first of the Renaissance. 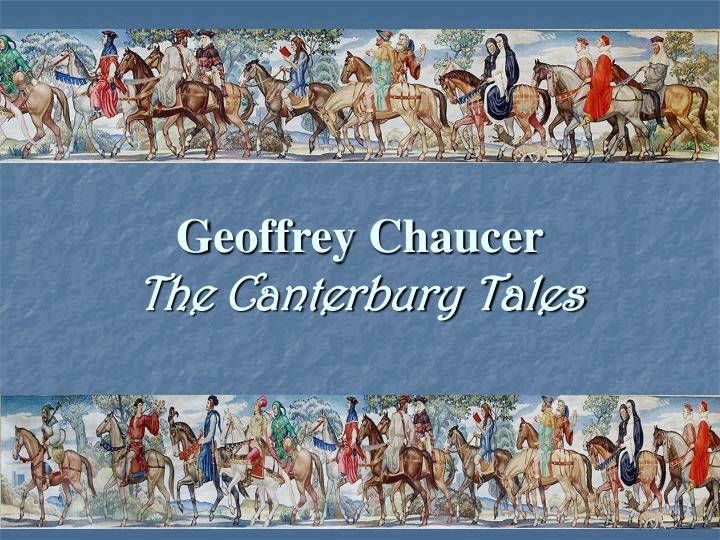 Pilgrimages of every kind were extremely common in Chaucer’s time. Such journeys were very valuable as a means by which to break the monotony of life in days when there were no newspapers, no printed books, nor any theatres. Many people looked forward to them as to pleasant holiday excursions. The months for these pilgrimages were April and May, because spring is the best season in the British Isles.

The most popular English pilgrimage was to Canterbury. Second to Canterbury was the town of Chester where people could see plays based on Bible stories performed in the churches.

Pilgrimage towns were crowded with inns and churches. Bells were constantly ringing. Some churches had relics of the saints, and people believed these had the miraculous power to cure diseases. Other people were attracted by the beautiful monuments.

The pilgrimage was a “democratic institution”, which means that rich and poor, noble and peasant rode side by side and stopped at the same inns.

Chaucer opens his work with a prologue to the whole work. In the prologue thirty men and women from all ranks of society pass before our eyes. Chaucer draws a rapid portrait of each traveller, thus showing his character. “The Canterbury Tales” sums up all types of stories that existed in the Middle Ages and shows all ranks of society, all types of people that lived during this time, and through these people he portrays a true picture of the life of the 14th century.

Chaucer was the creator of a new literary language. He chose to write in the popular tongue, though the aristocracy at the time read and spoke French. Chaucer was the true founder of English literature.