One of Britain’s favourite topics of conversation is the weather.

English weather is talked about by the English a lot. Talking about the weather accounts for more casual conversations than any other topic, and there is no other way to ‘break the ice’ than mentioning something about the forecast! It can change at any moment. The English have to put up with a pretty heavy amount of rain and bizarre changes of weather within the space of a few minutes. In England, you just never know from one hour to the next what the weather will do. The golden rule is to expect rain, sun, heat and cold all in one day and dress accordingly!

Freak hailstorms in the summer and scorching winter days aside, there are four seasons in Britain, in the order of an academic year, these are autumn, winter, spring and summer. Each season has its beauty and watching the seasons change has for centuries inspired Britain’s writers, artists and composers. Confusingly none of these seasons can be described as the ‘rainy season’ since it rains all year round. So whatever else you do, you will need to acquire an umbrella and a plastic waterproof coat with a hood.

Winter is the coldest time of the year; all the country suffers from snow, ice and it is very chilly and windy. It can get dark as early as 4 p.m. The shops start their famous January sales in the New Year, so wrap up warm and find some bargains! You’ll also find hot chestnut sellers in the streets roasting chestnuts over hot coals.

One of the main aspects of the British climate is its changeable nature. This is probably more apparent in spring than in any other season. You could be enjoying an idyllic picnic one minute and rushing for cover the next! On the whole though, spring is one of the nicest times. The flowers are starting to bloom, the trees beginning to bud. Heavy rain and hail can occur rather often.  The trees, confused by the sunshine, have blossomed, but then, shaken to its roots by the mad May breezes, they had shed its plumage and been given a good February-style soaking.

Regardless of the fact that the majority of the UK rainfall occurs during the summer, this is the time when people put on their T-shirts and shorts, even if it’s pouring with rain. The British are always keen to try and enjoy themselves in spite of the elements, and many would feel defeated if they had to wrap up warm during the summer months, though there are invariably a number of days when the temperature can be rather high ( 27C – 30C). It is also good time to take a trip out of town. Don’t forget an umbrella, though. 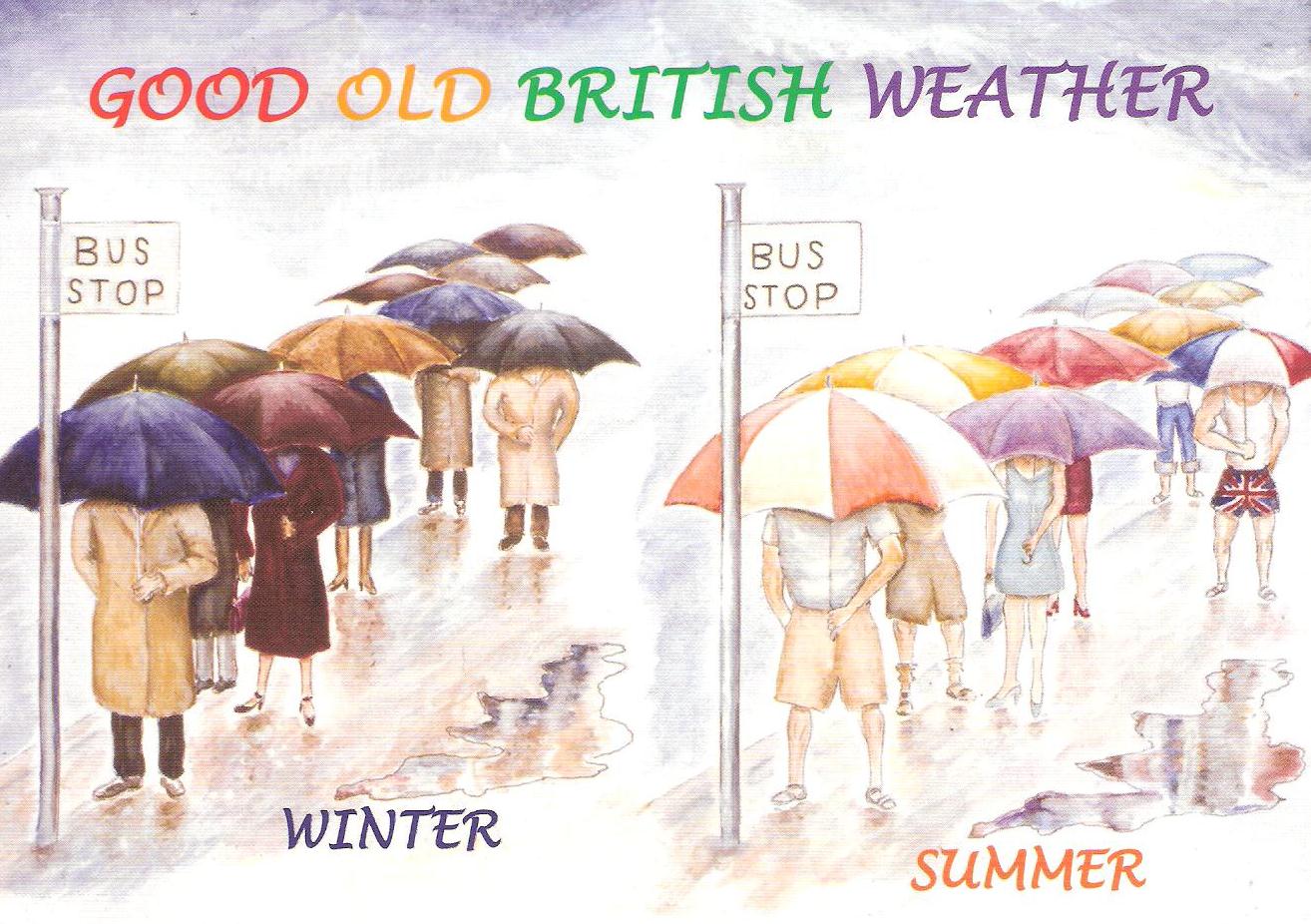 Wet, damp, misty and grey is the usual perception of an English autumn. It’s also the perfect time to go and visit one of the beautiful parks, with the foliage turning deep hues of red, orange and yellow. Take a waterproof coat and some sensible shoes and go for a stroll. Pubs offer warm and cozy refuge. The shops are filled with Christmas goods.