Have you heard about such a game as elephant polo?

The most unusual game in the world is elephant polo.

Elephant polo was first played at the beginning of the 20th century in India by wealthy British dudes. An annual championship is now played every December in Nepal. it is called the World Elephant Polo Tournament and it takes place in Nepal every year.

There’s an elephant polo regularly held in Thailand. The name of this Thailand’s highly popular game is the King’s Cup Elephant Polo Tournament. Elephants in this tournament only respond to Thai commands from their mahouts.

The first elephant polo games were played with a soccer ball. These were quickly changed to standard polo balls after it was realized the elephants liked to stamp and pop the soccer balls! 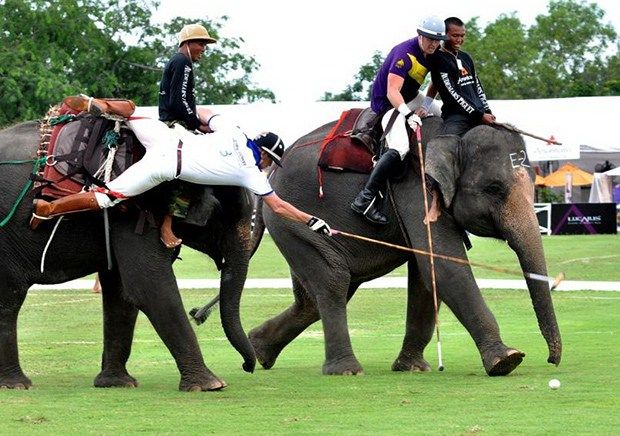 Elephants may look very heavy and slow, but they can really move when they want to. The field is much smaller than a football field. There are only eight animals playing at the same time and they only play for ten minutes each half.

There are some rather funny rules for elephant polo. For example, elephants are not allowed to lie down in front of the goal. It’s fun to watch the “poop scooper” running  behind the elephants picking up the large dung heaps that they dropped.

Elephant polo is great fun, but it is also very expensive. It costs $12,000 just to enter the tournament. It’s exciting to watch and if you can afford the price of a ticket to Nepal, it’s highly recommented!