When we think of Americans, we usually associate them with colorful clothes, noisy behavior and overweight. But what are they really like? What values do they have? It is not possible to answer this question explicitly but it seems that some American characterisitcs are a legacy of the Puritan ideology.

The Puritans thought of themselves as special people able to build ‘a city upon a hill’. They considered their success and increasing prosperity a sign of God’s grace and did not respect those who failed. They promoted hard work, self-reliance and believed in man’s unlimited ability to make progress. Even today their ideas are still popular. The special significance of succeeding in life has come to characterize the American culture ever since.

Ameican children are taught that drive, initiative and activity are the essence of life. It is believed that passivity warps the mind and that is why it is not accepted. Generally, Americans are characterized by a very practical sense and optimism. They never give up and even if they have problems, they are always trying to find some solution. Their recipe is simple: You have no money? No job? Don’t wait! Do something! Be flexible! There is always a way out! Take a course in gardening, cooking, ceramics, embroidering, typing … Promote yourself! You must find some way to achieve success! If you don’t, you are a muff and a crock.

Americans see their country as a vast continent of unlimited possibilities, the Promised Land where everyone has a chance to become perfect and successful. Success means money, hence Americans seem to be preoccupied with the thought of how to make money. Many of them still believe in the myth ‘from rags to riches’. However, not everyone becomes a millionaire in the richest country in the world. The vast majority of Americans have their own house, a good car and a well-paid job. The less fortunate ones rent a sleazy apartment and live on unemployment benefits. It is also commonly accepted that in that country of welfare there are some people living in cardboard boxes, sleeping on the pavement and carying their belongings in plastic bags.

Another American obsession, apart from money, is being fit and healthy. Illnesses make life complicated, hence Americans put a lot of effort into prevention. They regularly see specialists, take tons of vitamins, minerals and pills, practise sports (especially jogging), and keep a healthy, low-fat diet. Paradoxically, there are more overweight people in the States than anywhere else. It is not surprising since they are constantly temped by calorific ‘junk food’ snacks, fry-ups, hot dogs, hamburgers, pizza, chocolate bars, chips, cookies and so on. 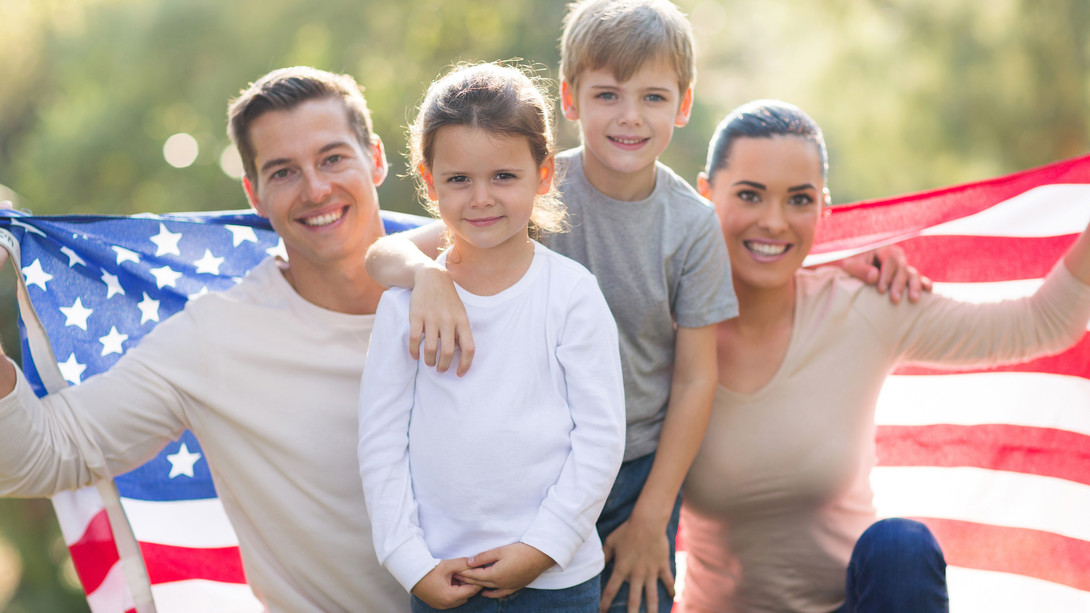 And what about the American model of family? Most Americans live in one-storeyed houses with a lawn, two cars in the garage, two tlevision sets and a few telephones. A typical family consists of parents and two children (although nowadays there are more and more one-parent families in the U.S.). When the children become independent, they move out and live on their own. Hence, the family bonds in America are not very strong. It is also not customary to live with grandparents. Americans protect in this way their privacy and independence.

Although Ameicans care a lot about not being disturbed, they are open and friendly. They are always ready to start a conversation in the street, in a store or subway. However, this is usually a meaningless ‘small talk’ which does not tell you anything about the person you are talking to. Still, Americans are very straightforward and always speak their minds. So if you need help or have a problem, you have to tell them directly. Otherwise, they will not react so as not to interfere with your private life.

It is often said that Americans are a nation without roots. Indeed, they do not seem to be attached either to the house in which they live or the place of their work. Everything that counts in their lives is today: today’s home, today’s job, today’s friends… Nothing is regarded as constant. Americans are more mobile than any other nation in the world. They are always on the move, restlessly looking for better prospects and a better life.

In Europe there are people who have lived in the same house and been in the same job for 20, 30, 40 years and who would hate to pull up their roots and change to simeting new. That’s not the American way of life. They love change, they call it ‘the spirit of adventure’. So they still like to ‘move away’, to change homes and jobs.

Americans are often surprised when others question their achievements, values or even their way of life. They are convinced that they are a unique nation which invented almost everything from the telephone to the artificial heart, and created the best of all possible worlds. True or not, they are proud of themselves and their country.