Ukrainian Christmas festivities begin on Christmas Eve (January 6) and end on the Feast of the Epiphany (January 19). The Christmas Eve Supper or Sviata Vecheria (Holy Supper) brings the family together to partake in special foods and begin the holiday with many customs and traditions, which reach back to antiquity. The rituals of the Christmas Eve are dedicated to God, to the welfare of the family, and to the remembrance of the ancestors.

With the appearance of the first star which is believed to be the Star of Bethlehem, the family gathers to begin supper.

The table is covered with two tablecloths, one for the ancestors of the family, the second for the living members. In pagan times ancestors were considered to be benevolent spirits, who, when properly respected, brought good fortune to the living family members. Under the table, as well as under the tablecloths some hay is spread to remember that Christ was born in a manger. The table always has one extra place-setting for the deceased family members, whose souls, according to belief, come on Christmas Eve and partake of the food. 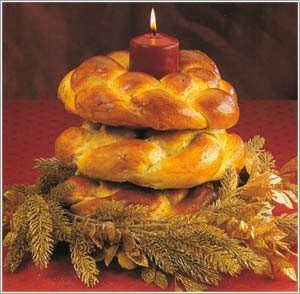 The traditional bread for Sviata Vechera (Christmas Eve) is a kolach. It is braided and formed into a circle. The top is glazed with an egg wash. Its round shape gives it its name – kolo (a circle) – and may symbolize eternity or the sun. The Kolach was placed in the centre of the table with a candle in the centre which was lit at mealtime. 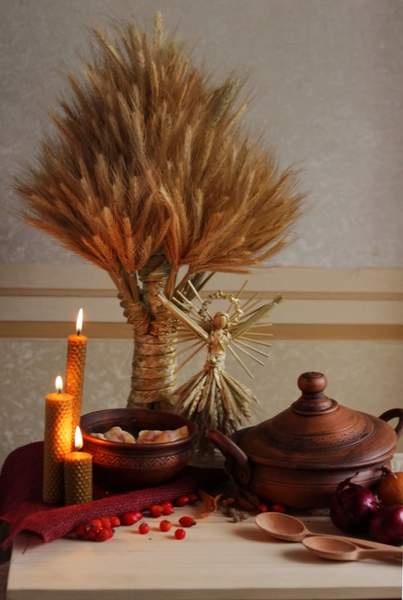 A didukh (meaning grandfather) is a sheaf of wheat stalks or made of mixed grain stalks. It is placed under the icons in the house. In Ukraine, this is a very important Christmas tradition, because the stalks of grain symbolize all the ancestors of the family, and it is believed that their spirits reside in it during the holidays.

After the didukh is positioned in the place of honor, the father or head of the household places a bowl of kutia (boiled wheat mixed with poppy seeds and honey) next to it. Kutia is the most important food of the entire Christmas Eve Supper, and is also called God’s Food. A jug of uzvar (stewed fruits, which should contain twelve different fruits) and is called God’s Drink, is also served. 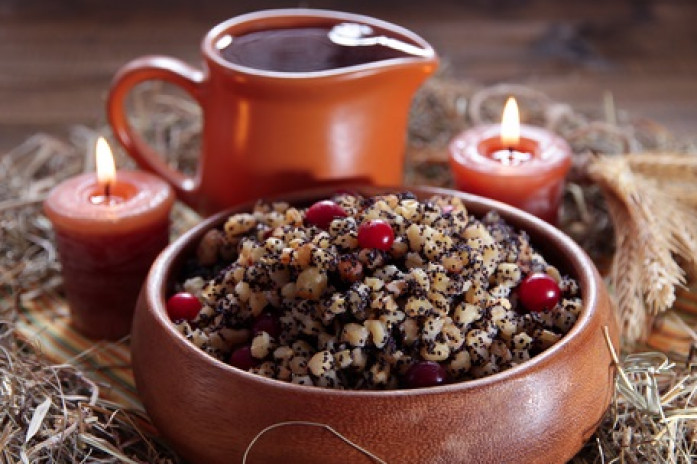 After all the preparations have been completed, the father offers each member of the family a piece of bread dipped in honey, which had been previously blessed in church. He then leads the family in prayer. After the prayer the father extends his best wishes to everyone with the greeting Khrystos Razhdaietsia (Christ is born), and the family sits down to a twelve-course meatless Christmas Eve Supper.

There are twelve courses in the Supper, because according to the Christian tradition each course is dedicated to one of Christ’s Apostles. According to the ancient pagan belief, each course stood was for every full moon during the course of the year. The courses are meatless because there is a period of fasting required by the Church until Christmas Day. However, for the pagans the meatless dishes were a form of bloodless sacrifice to the gods.

The first course is always kutia. It is the main dish of the whole supper. Then comes borshch (beet soup) with vushka (boiled dumplings filled with chopped mushrooms and onions). This is followed by a variety of fish – baked, broiled, fried, cold in aspic, fish balls, marinated herring and so on. Then come varenyky (boiled dumplings filled with cabbage, potatoes, buckwheat grains, or prunes. There are also holubtsi (stuffed cabbage), and the supper ends with uzvar. 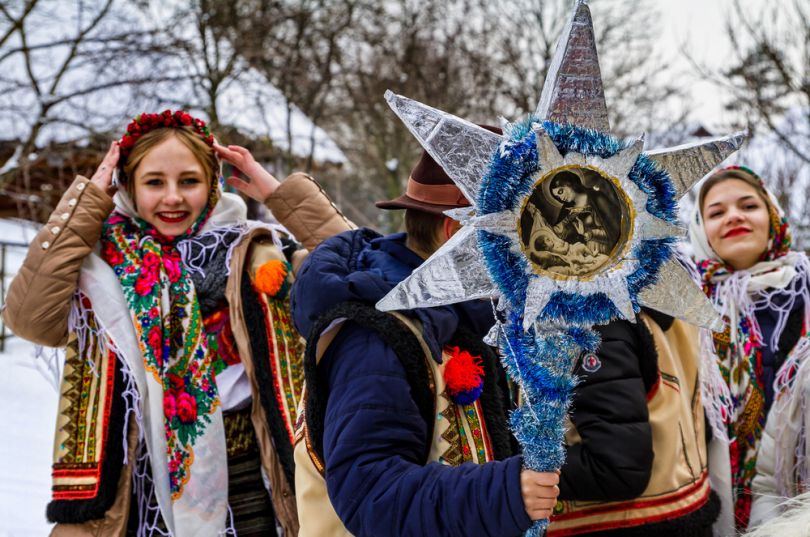 Both koliadky and shchedrivky have pagan elements in them, but many have been Christianized. For example, one pagan carol tells of a landowner who is awakened by a swallow and told to make preparations, because three guests are coming to his house: the sun, the moon and the rain. In the Christianized version the three guests become Jesus Christ, St. Nicholas and St. George. The very popular Ukrainian carol in the United states, “Carol of the Bells”, in its originality is a shchedrivka and tells of a swallow (herald of Spring) that has come to a landowner’s house and asks him to come out and see how rich he is, how many calves he has, and so on.

The themes of Ukrainian Christmas songs vary. Many, of course, deal with the birth of Christ and that occasion’s joyful celebrations, and many of them have apocryphal elements. Another group of carols contain purely pagan mythological elements. Still another group deals with Ukrainian history of the 9-12 centuries, mostly with the heroic episodes in the lives of some of the princes that were favorite among the people. One of the largest groups of carols are glorification songs – glorifying the landowner, the farmer, his wife, his sons, his daughters, every member of the family. These songs glorify their work as well as their personal traits.

Caroling required extensive preparation. Each group had a leader. One member dressed as a goat. Another as a bag carrier, the collector of all the gifts people would give them. Yet another carried a six-pointed star attached to a long stick with a light in its center, which symbolized the Star of Bethlehem. In some places the people even had musical instruments, such as the violin, tsymbaly (dulcimer), or the trembita (a wooden pipe about 8-10 feet long, used in the Carpathian mountains by the Hutsuls).

Caroling was not a simple singing of Christmas songs; it was more of a folk opera. The carolers first had to ask for permission to sing. If the answer was yes, they entered the house and sang carols for each member of the family, even for the smallest child. Sometimes they even performed slow ritualistic dances. They also had to present a short humorous skit involving the goat. The custom of the goat accompanying the carolers has its origin in the pagan times when the goat represented the god of fertility. The skit showed the goat dying and then being brought back to life. This also symbolized the death of Winter and the birth of Spring. The caroling always ended with short well-wishing poems, appropriately selected for each home.

Koliadky and shchedrivky are the oldest groups of Ukrainian folk songs. They are sung by Ukrainians at Christmas time throughout the world.

Vertep, the Ukrainian Christmas puppet theater had its beginnings in the XVII century. According to scholars, the theater was probably founded by students of the Kyivan Academy, who also wrote the plays performed there. This theater became very popular and with time its special plays were performed by wandering mistrals, teachers, deacons and traveling theater groups.

The puppet theater consisted of a miniature two-storied structure, which served as a stage for the action. The actors were puppets made of wood. Each puppet had a wire attached to one leg and in this way the puppeteer was able to control the doll’s movement, moving it back and forth via the vertical and horizontal grooves cut out in the two floors of the structure. 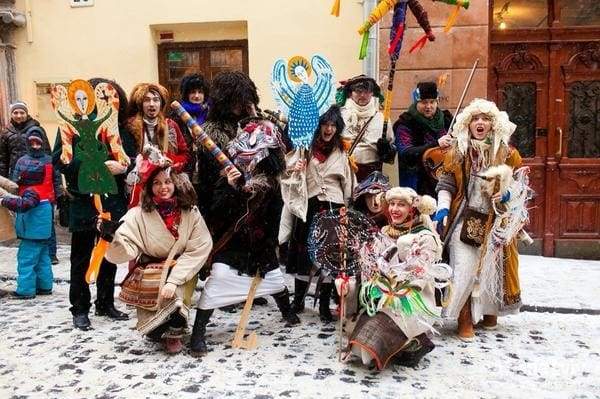 The play itself had two separate acts that were thematically unconnected. The first, which took place in the upper floor of the miniature theater, had a religious theme and was didactic in character. The play presented a shepherd and the Three Kings who came to visit the newborn Jesus. The shepherds sang songs and rejoiced in His birth. there was also a scene with the weeping Rachel, whose children were killed by the order of King Herod. In this scene Rachel cursed the King and as he died, the devil came to take his body and soul down to hell.

The entire second act of the play took place on the lower floor of the theater. It consisted of short, humorous scenes, designed to amuse the viewer. Although the various short scenes of the second act did not constitute a tightly knit story, the action in them did revolve around one personage who was not given a specific name, but was just called “Kozak Zaporozhets”.

In Ukrainian folklore, there are many legends about Kozak Mamai, who was a great warrior, defender of freedom and honor. He always appeared at a very critical moment in a battle to save the day. Probably the role of Kozak in the puppet theater was based on Kozak Mamai, this semi-legendary folk hero. In the puppet theater play the Kozak doll was always made larger than the others. He wore the traditional dress of the Kozaky, had a bandura (Ukrainian folk string instrument), and smoked a pipe. In a very long monologue, the Kozak puppet spoke of the glorious historical past of Ukraine.

The short scenes of the second act also dealt with a variety of negative characteristics of man, i.e., cowardice, greed, etc. The scenes changed rapidly and in them people lied, cheated, tricked one another, argued, fought – all for the purpose of bringing out the comic elements in such behavior. The Kozak, however, was beyond all that. although he may have pretended to be fooled, he did so only to get a hearty laugh from the audience. He conquered all who wished him ill, even the devil. The viewers saw the heroic past of Ukraine in the person of Kozak. For them he was the eternal defender of Ukraine’s freedom.

Both acts of the play were accompanied by music – a choir, duets, solos and instrumental ensembles made up of violins, cymbals, a flute and a drum. The Kozak played the bandura and sang old epic songs. He and the other characters in the play also danced. 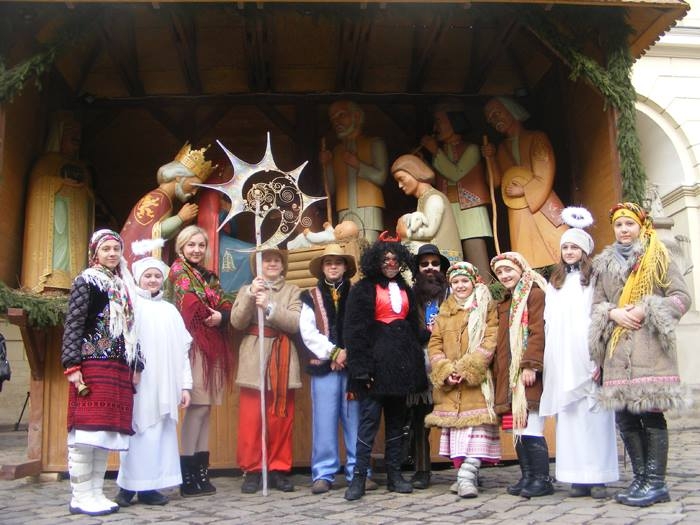 During the Christmas holidays, students went from, from town to town, village to village, house to house with the Vertep and gave performances.

Malanka is a Ukrainian folk holiday celebrated on January 13th, which is New Year’s Eve in accordance with the Julian calendar.

Malanka commemorates the feast day of St. Melania. On this night in Ukraine, carolers traditionally went from house to house playing pranks or acting out a small play (similar to “Vertep” — see above), with a bachelor dressed in women’s clothing leading the troop. 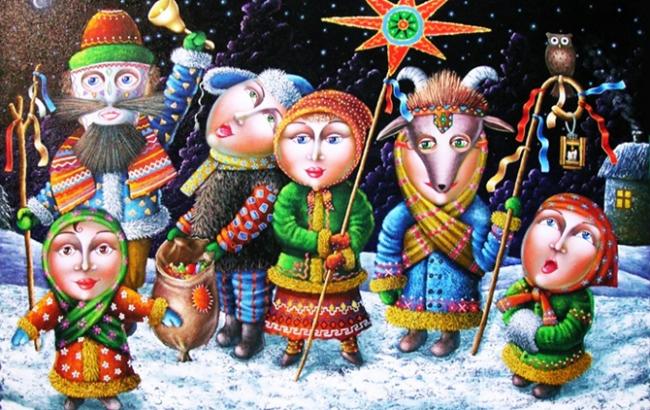 Malanka caps off the festivities of the Christmas holidays, and is often the last opportunity for partying before the solemn period of Lent which precedes Easter.

On New Year’s Day, the church celebrates both the feast day of St. Basil and commemorates the Circumcision of Christ.