He arrived early on Christmas morning to give the church a thorough inspection, noting with approval that the aisles and seats had been swept and dusted after the midnight Christmas Eve service. Any lost purses, Bibles, and gloves had been collected and sent to the office where the lost and found box was kept; every forgotten flyer and bulletin insert had been rounded up and discarded.

Outside it was just beginning to grow light. In the church, where only the pastor moved, candles flickered and threw shifting shadows on the arches and the stone floor. Occasionally, stray candlelight picked out the rich colors in the stained glass windows. It was cold and, except for the pastor’s slow tread, it was silent.

He paused beside the almost life-sized Nativity scene to say a Christmas prayer of thanksgiving to the One whose birth is celebrated. The figures, each lovingly crafted with wonderful realism, sat on a small stage. A night sky and the star that led the shepherds and the wise men to the Messiah on the day of His birth could be seen through the open door of the stable. The shepherds were just entering, eyes wide in obvious awe. Various kinds of livestock stood in stalls or lay on the edges of the scene. And in the center was the Holy Family. Looking at the manger scene the pastor could almost feel the reverence of that long ago night.

Slowly, a puzzled frown crept across his brow. Then his choked gasp rustled through the empty church.

The manger was empty! The small figure representing the infant Savior was gone.

Hurriedly, and with growing agitation, the pastor began to search the church again. Starting by the manger, he peered back through the aisles, nearly crawling on his hands and knees to see all the way under each seat. But there was nothing. Next, he called the custodian, thinking he may have seen the figure of the infant Jesus. Then he called the assistant pastor and all the elders, but no one had any explanation. In the end, each shaking his head sorrowfully, they accepted the truth they had all been trying to avoid: The figure could not have been mislaid or lost—it must have been stolen.

With solemnity befitting the occasion, the pastor reported the theft to the congregation that assembled not long after. His voice trembled as he told them what he had found earlier that morning. For a person to steal the very symbol of their reason for celebrating, he said, their very reason for hope—well, he just did not understand. His gaze swept over the faces in the early morning congregation, disappointed to think that someone in his own congregation might do such a thing.

“The figure of the Christ Child,” he said, “must be returned before this Christmas Day is over. No one will ask any questions, but it must be brought back immediately.” Then, he slipped from the pulpit and the choir closed the service with a Christmas hymn, “O Come, Let Us Adore Him.”

The manger remained empty throughout the day.

Toward the end of the afternoon, discouraged and heavy-hearted, the pastor took a walk through the wintry streets of the neighborhood. Ahead of him he saw one of the youngest members of his flock, a six-year-old boy named Tommy. Bundled shabbily against the cold, Tommy trudged up the sidewalk, proudly dragging behind him a toy express wagon. It was bright and red and obviously Christmas new.

Knowing what sacrifice and scrimping the purchase of this toy must have meant—Tommy’s family could barely make ends meet—the pastor was deeply touched. The love Tommy’s parents had for their little boy gave the pastor’s heart a gentle warmth, and he felt his faith in human nature beginning to return. He sped up so he could wish Tommy a merry Christmas and admire the beautiful new wagon. 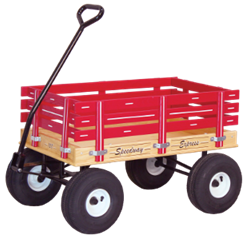 But as he drew nearer he saw that the wagon was not empty. There lay the Baby Jesus, now wrapped and blanketed but not quite hidden.

The pastor crouched down beside Tommy, one knee feeling the damp snow through his pant leg. His face was grim and disappointed. Tommy may be just a little boy, and one must make allowances, of course—but he was still old enough to understand that stealing was very wrong. The pastor made this crystal clear to Tommy while the little boy stood, his seemingly guiltless clear eyes filling with what the pastor was sure were penitent tears.

“But, Pastor,” the small boy quavered when at last the man finished talking, “I didn’t steal Jesus. It wasn’t like that at all.” He paused to swallow hard and wipe a few tears away. “It’s just that I’ve been asking Him for a red wagon as a Christmas present for a long time—and I promised Him that when I got it I’d take Him out for the first ride.”

Discuss the story The Manger Was Empty with your classmates.