Languages of the British Isles

Languages of the British Isles

Read and do the exercises to learn about the languages of the British Isles.

Match the Ukrainian equivalents to the English words and word-combinations. 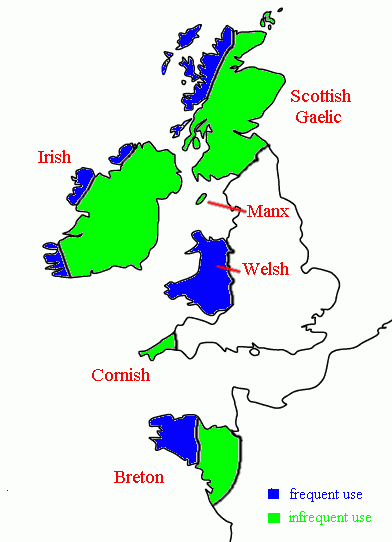 Write down the English equivalents.

It may surprise you to know that until a few centuries ago there were many natives of what we call the British Isles who did not speak English. The Western land of Wales spoke Welsh, in the farthest north and the islands of Scotland the language was Gaelic and a similar language Irish Gaelic was spoken in Ireland, Manx was the language of the Isle of Man, and Cornish that of the south-western top of Britain.

We are not talking about dialects (localized versions of a language) which often contain alternative words or phrases for certain things, but which are forms of English. Welsh, Gaelic, Manx and Cornish are complete languages with their grammar, poetry and stories – all that we call culture.

Complete the sentences, using the text.

Fill in the gaps, using the correct forms of the verbs in brackets.

Memorize the following information and be ready to write it down.

A few centuries ago on the British Isles there were many natives who did not speak English. Wales spoke Welsh, Scotland spoke Gaelic, Ireland spoke Irish Gaelic, Manx was the language of the Isle of Man and Cornish was spoken in the south-west of Britain.

They were not dialects. They were complete languages with their own grammar, poetry and stories – all that we call culture.

“England” – What Does It Mean?

The name England comes from the words ‘Angle Land’. The Angles were people who came from northern Germany in the 5 – 6th centuries. English people are sometimes called Anglo-Saxons. Another name sometimes used for England is ‘Albion’, appeared in the 1st century. ‘England’ is sometimes, wrongly, used in reference to the whole United Kingdom, the entire island of Great Britain.

England at first became a series of kingdoms, the strongest of which was Wessex (from West-Saxon). The names of several regions of England come from this period: the name Sussex comes from South-Saxon, Essex from East-Saxon, and East Anglia from East-Angle.

The English language is the main language spoken throughout England, although there are many different regional accents. It can be difficult to know how to spell or to pronounce some English words, because the language has been influenced by Greek, Latin, German (the language of the Angles, Saxons and Jutes), French (the Normans language), Gaelic (the Celtic language) and Danish (the language of the Vikings).