Read to Know About Scotland

Although Scotland takes up one third of the territory of the British Isles, its population is not very big. It is the most northern part of the island of Great Britain and is not far away from the Arctic Circle. That’s why it is not densely populated: its population is a little over 5 million people. The Cheviot Hills mark the boundary between England and Scotland. Apart from this land link with England, Scotland is surrounded by sea. Scotland includes the Hebrides off the west coast, and the Orkney and Shetland Isles of the north coast. It is bounded by the North Sea on east.

Scotland is divided into three regions: the Highlands, which is the most under populated area with a harsh climate, the Lowlands, which is the most industrial region, with about three quarters of the population, and the Southern Uplands, with hills, which border on England. The Highlands of Scotland are among the oldest mountains in the world. They reach their highest point in Ben Nevis (1343 m).

Many valleys between the hills are filled with lakes called lochs. The best-known is Loch Ness where as some people think a large monster lives. The most important place here is Aberdeen which is the oil centre of Scotland. Ships and helicopters travel from Aberdeen to the North Sea oil rigs. Work on an oil rig is difficult and dangerous.

The Highlands with thin soil are largely moorland with heather and grasses. 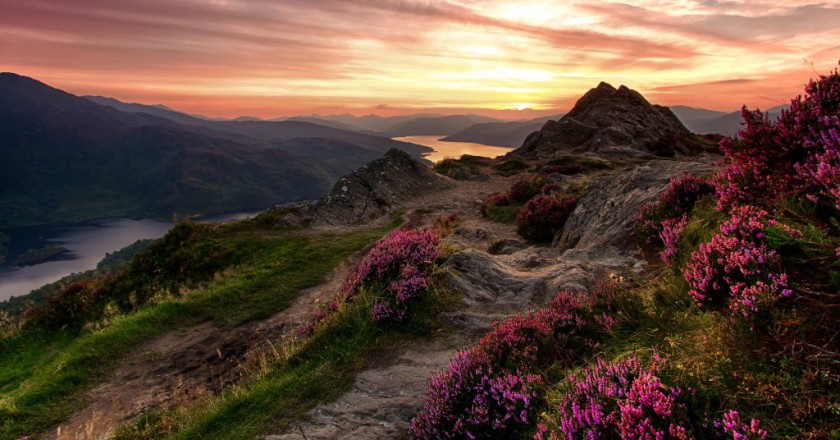 Most of the population of Scotland is concentrated in the Lowlands. Here, on the Clyde, is Glasgow, Scotland’s biggest city. Ship-building is one of the most important industries; other industries are iron and steel, heavy and light engineering and coalmining. It’s a grim city because of the greyness of its houses. Glasgow is supposed to possess more public gardens and parks than any other city in Britain. In one of the parks there is the pride of Glasgow – its Art Gallery, which has one of the finest collections of pictures in Britain.

Scotland had been an independent state and was forcefully joined into the UK after a long struggle for its independence in 1707.

One of the things that people associate with Scotland is the kilt. The kilt is a relic of the time when the clan system existed in the Highlands.

Scottish kilts are known as the national dress of Scotalnd and are a highly recognized form of dress throughout the world. Kilts have deep cultural and historical roots in the country of Scotland and are a sacred symbol of patriotism and honor for a true Scotsman. The word “kilt” is a derivation of the ancient Norse word, kjilt, which means pleated, and refers to clothing that is tucked up and around the body. 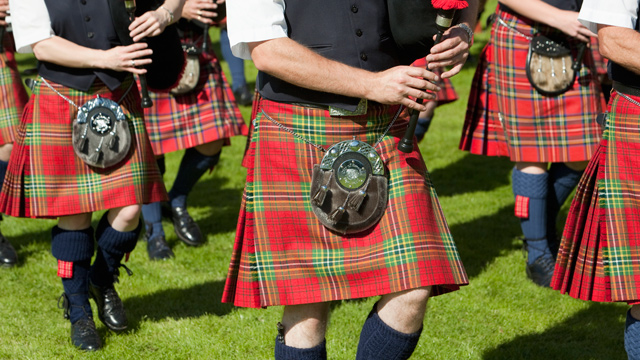 Scottish kilts originate back to the 16th century, when they were traditionally worn as full length garments by Gaelic-speaking male Highlanders of northern Scotland. The wearing of Scottish kilts was common during the 1720s, when the British military used them as their formal uniforms. The knee-length kilt, similar to the modern kilt of today, did not develop until the late 17th or early 18th century.

The Gaelic word  “clan” means “family” or “descendants” and the great clans of the 16th and 17th centuries were indeed very similar to enormous families, ruled by powerful chiefs. Sometimes there were fierce battles between different clans but nowadays the McDonalds and the McKenzies, the Campbells and the Lindsays all live in peace with each other. It is possible to find people with these surnames in many English-speaking countries, and they feel they share the same background. 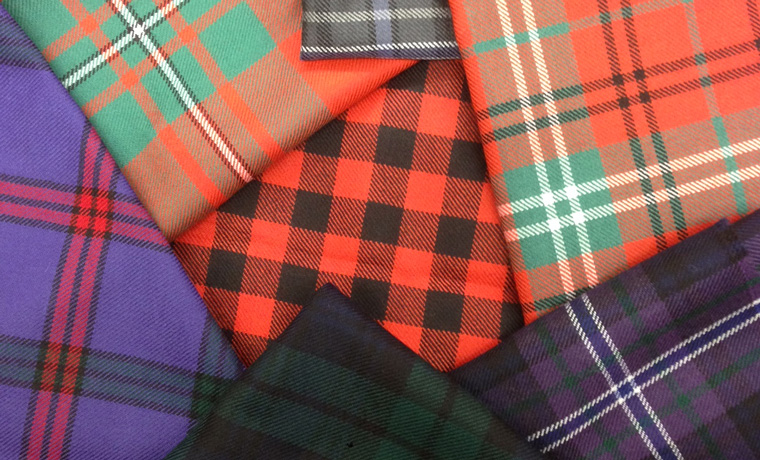 The wearing of tartans or coloured checks was common in the Highlands before the defeat by the English in 1745. Originally, the tartan was worn as a single piece of cloth, drawn in at the waist and thrown over the shoulder. Each clan has its own tartan and, since the first international gathering of the clans in 1972 many people have become interested in traditional forms of Scottish dress. Tartans are now part of international fashion.

Common names in Scotland are Morag, Fiona or Jean. The names Jimmy and Jack are so common that many English people call a man from Scotland “a Jimmy” or “a Jack”.

Edinburgh has been the capital since the 15th century, when its fortified castle was the centre of Scotland. It is associated with the names of George Gordon Byron and Walter Scott, Robert Louis Stevenson, Robert Burns and Arthur Conan Doyle, creator of Sherlock Holmes. It is also associated with the world-famous Edinburgh Festival of Music and Drama. The Festival was first held in 1947 and has been held annually ever since. Its emblem is a thistle.

The National Musical Instrument of the Scots

The bagpipe was known to ancient civilizations of the Near East. It was probably introduced into Britain by the Romans. Carvings of bagpipe players on churches and a few words about them in the works of Chaucer and other writers show that it was popular all over the country in the Middle Ages.

Now bagpipes can be seen and heard only in the northern counties of England, in Ireland and in Scotland where it was introduced much later. 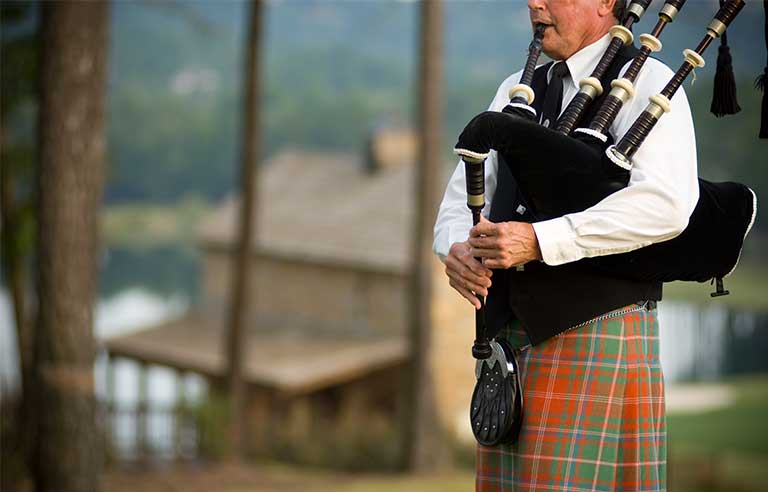 Bagpipes have been used in most European countries. It is also native to India and China. In Scotland the bagpipe is first recorded in the 15th century during the reign of James I, who was a very good player, and probably did much to make it popular. For long it has been considered a national Scottish instrument.

The sound of bagpipes is very stirring. The old Highland clans and later the Highland regiments used to go into battle to the sound of bagpipes. The bagpipe consists of a reed pipe, the “chanter”, and a wind bag which provides a regular supply of air to the pipe. The wind pipe is filled either from the mouth or by a bellows which the player works with his arm. The chanter has a number of holes or keys by means of which the tune is played.

Scottish Highland Games, at which sports (including tossing the caber, putting the weight and throwing the hammer), dancing and piping competitions take place, attract large numbers of spectators from all over the world. These meetings are held every year in different places in the Scottish Highlands. They include the clans led by their pipers, dressed in their kilts, tartan plaids, and plumed bonnets, who march round the arena. 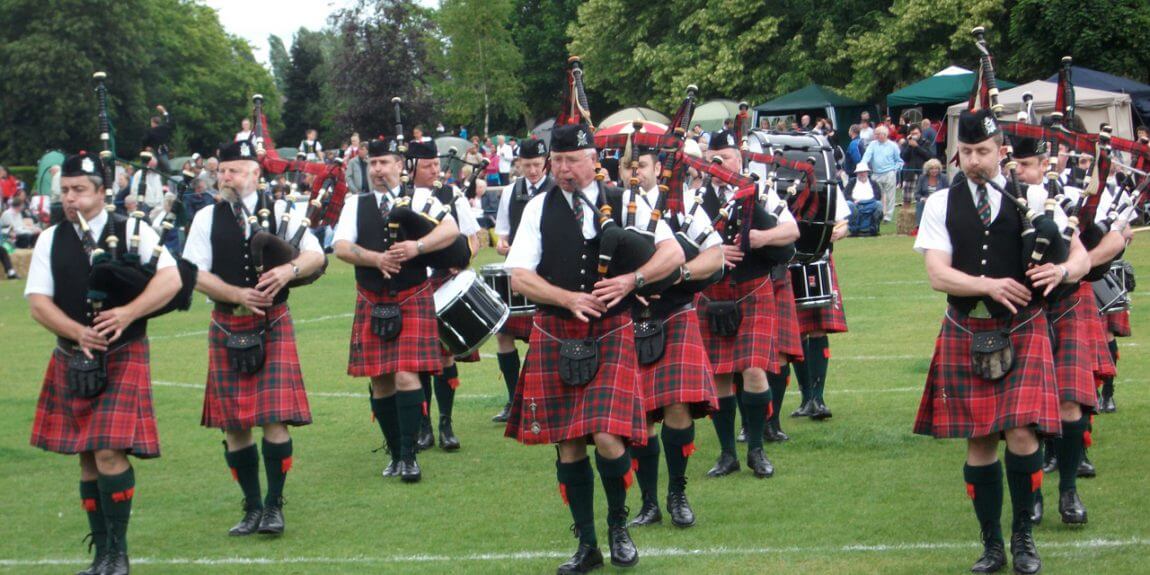 The features common to Highland Games are bagpipe and Highland dancing competitions and the performance of heavy athletic events – some of which, such as tossing the caber, are Highland in origin. All competitors wear Highland dress, as do most of the judges. The games take place in a large roped-off arena. Several events take place at the same time: pipers and dancers perform on a platform; athletes toss the caber, put the weight, throw the hammer, and wrestle. There is also a competition for the best-dressed Highlander.

Highland dancing is performed to bagpipe music, by men and women, such as the Sword Dance and the Reel.

No one knows exactly when the men of the Highlands first gathered to wrestle, toss cabers, throw hammers, put weights, dance and play music. The Games reflected the tough life of the early Scots. Muscle power was their means of lifehood – handling timber, lifting rocks to build houses, hunting. From such activities have developed the contests of tossing the caber, putting the weight, and throwing the hammer.

Tossing the caber originated among woodmen who wanted to cast their logs into the deepest part of a river.  Tossing the caber is not a question of who can throw it farthest. For a perfect throw the caber must land in the 12-o’clock position after being thrown in a vertical semicircle. The caber is a very heavy and long log.