Read the text about BASE jumping to develop your reading skills. Level B1

Some decades ago, Carl Boenish took a team of skydivers to Yosemite National Park, USA, and jumped with them from El Captain’s summit. The sport developed into BASE jumping, named after the four types of fixed objects people jump from: Building, Antenna, Span (bridge) and Earth (cliff).

Due to the legislation surrounding it, many BASE jumpers keep their hobby a secret, so it’s difficult to say how many are involved in the sport. Estimated figures  are very low – there are probably fewer than 1500 across the world.

Different countries have different attitudes towards BASE jumping. In the USA, the act of BASE jumping is not illegal, although the owners of high bridges and buildings do not usually permit people to jump from them. There are tight regulations against the sport in American and Australian national parks. One of the few countries that welcomes BASE jumping is Malaysia, home of two of the world’s highest buildings.

It is the danger of the sport that lures people to it. Comparably, sky diving is very safe. For some people, skydiving begins to feel too safe, and they move on to BASE jumping to recapture the sense of excitement.

The main thrill experienced is a sensation called ground rush. BASE jumpers fall from heights much lower than those considered safe by skydivers. Though they do not reach the same speeds, they accelerate more quickly during their fall. At the fastest part of a skydiver’s fall the ground is still distant, but BASE jumpers see it approaching them at an incredible speed.

Are they mad? Maybe, but BASE jumpers also have great skill and focus. They have to know how to maneuver and land with total accuracy, as there is no room for mistakes. Anyone considering BASE jumping should already be an experienced skydiver. Attempting a BASE jump without the necessary knowledge or experience is suicidal.

No one can deny that BASE jumping is an incredibly dangerous sport. The jumps are much shorter than those undertaken by skydivers, leaving little time to open the parachute, or sort out problems if they arise. Such problems can often be fatal. 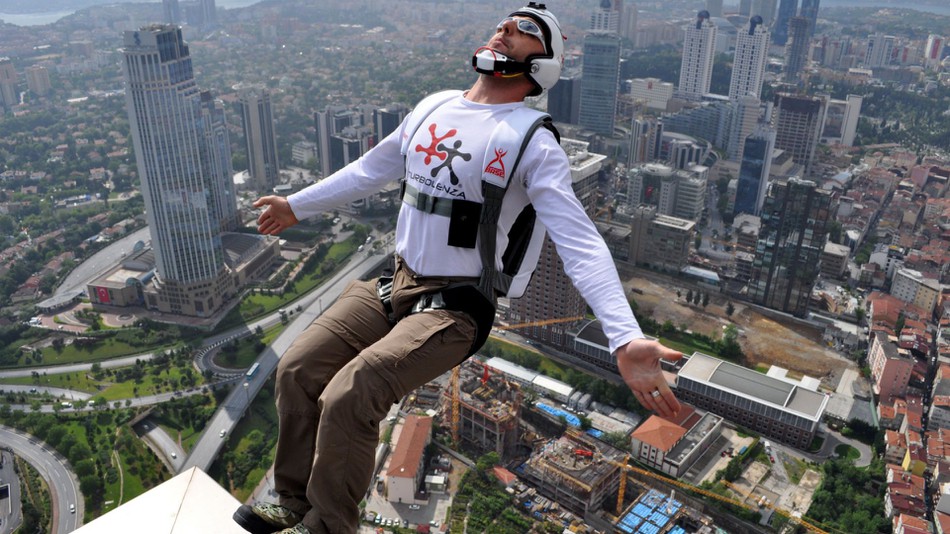 However, some BASE jumping enthusiasts insist that the risks are exaggerated, and can be kept to a minimum if the jumps are carried out correctly. Many claim that strict laws against jumping in national parks force them to jump in unsafe conditions, often from very dangerous low cliff edges with unsuitable equipment.

But even at organized jumps, casualties are expected with ambulances on stand-by for the broken ankles or more serious injuries.

to move on – іти далі

Task 1. Read the text. Choose the one best answer A, B, C, D to each question.

1.BASE jumpers jump from …

2. The right number of BASE jumpers is …

3. BASE jumping is officially welcomed in …

A. the whole world

4. Skydivers change their sport for BASE jumping because …

A. they want to capture the sense of excitement again

B. they are tired of skydiving

A. fall with the speed of skydivers

B. move faster than skydivers

D. move with the speed of a jet

6. Main requirements for the safe BASE jumping are all these mentioned below except …

7. Mistakes in BASE jumper’s accuracy cause …

8. What do BASE jumpers use to jump from the height?

9. What or who makes BASE jumpers jump in unsafe conditions?

A. good experience in jumping

B. strict laws against jumping

C. multiple supporters of this kind of sport

D. the desire to set up world records

A. organized in no way

In BASE jumping, parachutists jump from artificial and natural structures at heights between 90 and 1100 m (300 and 3600 ft). (The name BASE comes from buildings, antennas, spans (bridges), and earth (cliffs and waterfalls)—the four launching points for jumpers.) Because the launch heights are low compared to those in traditional skydiving, the parachutes used in BASE jumping are specially designed to open quickly. 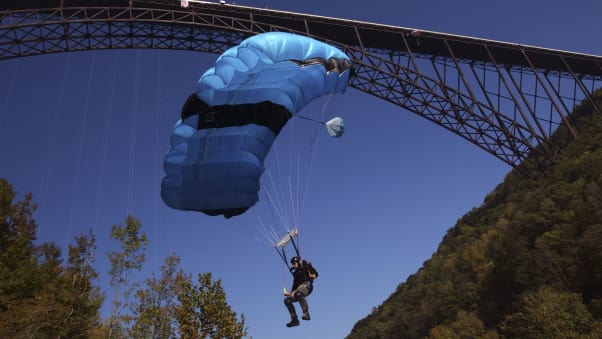 BASE jumping is considered one of the most dangerous of all extreme sports. One danger is that a jumper’s parachute may not open fast enough. Another is that wind can easily blow a jumper into a rock face or another nearby surface. Most law enforcement agencies prohibit BASE jumping, but even where the activity is legal, only competent skydivers should attempt jumps.

Skydiving, activity and sport in which people jump out of an aircraft—alone or in groups—and land by using a parachute. Because of the sensation of leaping into the air and free-falling some distance before opening their parachutes, skydivers usually experience a rush of adrenaline and then a peaceful sense of well-being. This feeling of calm lasts long after they land on the ground.

Task 2. Read the text again and then give the detailed answers to the questions.